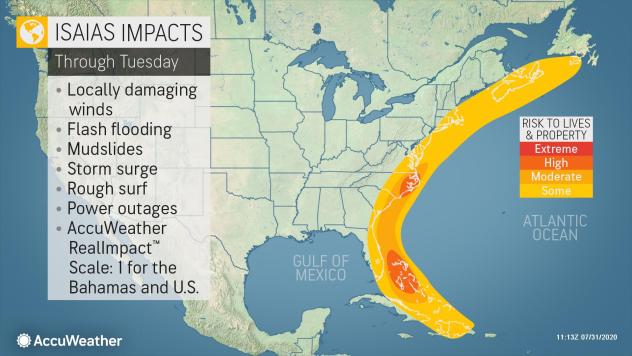 NEW YORK (1010 WINS) – The New York City area could see rain and winds from Hurricane Isaias late Monday and Tuesday as the storm moves up the East Coast — and Gov. Andrew Cuomo is urging New Yorkers to "be prepared and stay alert as conditions continue to develop throughout the weekend."

Isaias is expected to spread northward along the East Coast through early next week. Although its track is still unclear, forecast shows New York, New Jersey and Connecticut in the center of its projected path.

Here are the 11 AM EDT 7/31 Key Messages for Hurricane #Isaias as the storm lashes the Turks and Caicos. Conditions deteriorating across the central Bahamas. pic.twitter.com/1qnKgid40c

“While there is a great deal of uncertainty among forecasters concerning the final path of the storm, current models suggest the storm may impact the lower Hudson Valley, New York City and Long Island early next week,” his office said in a release.

“New Yorkers are far too familiar with the destructive powers of these storms, and I am urging the public to be prepared and stay alert as conditions continue to develop throughout the weekend,” he said in a statement.

At his briefing Friday, Mayor Bill de Blasio said the projection looks "pretty favorable" for New York City and that he believes the chance of the storm having a substantial impact on the area is minimal.

"We're watching this hour by hour," the mayor said. "Every one of us who went through Sandy, we never minimize the warning that a hurricane may be coming. I think we'll know a lot more in the course of the next 24 hours, and we'll have plenty of time in that case to give people appropriate instruction depending on what we learn." 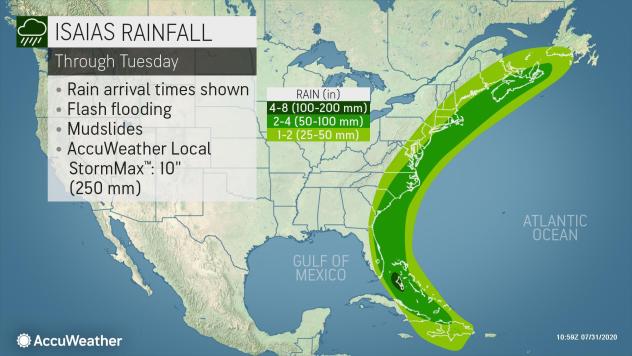 The five boroughs and surrounding areas may see gusty winds and downpours on Tuesday, with the storm expected to stay just offshore.

Heading into the weekend, temperatures will approach 80 in the city on Friday amid afternoon rain, according to AccuWeather.

Saturday will be sunny, hot and humid with a high of 88. RealFeel temperatures will be in the mid-90s.

Clouds increase on Sunday, and a couple of showers and thunderstorms are expected in the afternoon. The high will be 85.

Isaias may then impact the city late Monday into Tuesday. The amount of rain and strength of wind will depend on the path of the storm. 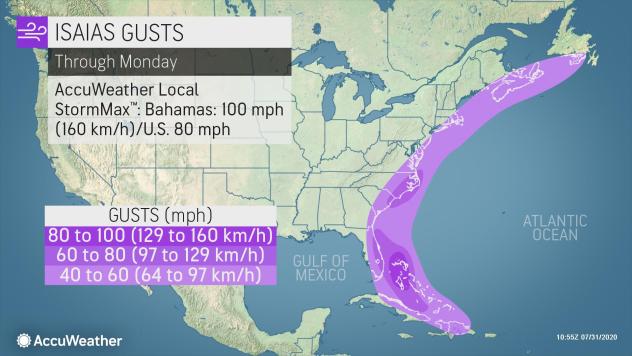 On Friday, the National Hurricane Center said, "The details of the track and intensity forecast remain uncertain, and it is too soon to determine the magnitude and location of these potential impacts, but interests along the entire U.S. East Coast should monitor the progress of Isaias and updates to the forecast."

The hurricane was centered about 340 miles southeast of Nassau in the Bahamas on Friday morning, moving northwest at 17 mph, with maximum sustained winds of 80 mph.

Hurricane conditions and dangerous storm surge are expected in the Bahamas through Saturday.

A Hurricane Watch was issued for parts of Florida’s east coast on Friday morning. South and east-Central Florida could see heavy rains from the storm as early as Friday night.

11 AM EDT 7/31: A Hurricane Watch and Tropical Storm Warning have been issued for portions of the Florida east coast. More info: https://t.co/tW4KeGdBFb #Isaias pic.twitter.com/i31BRINMnf 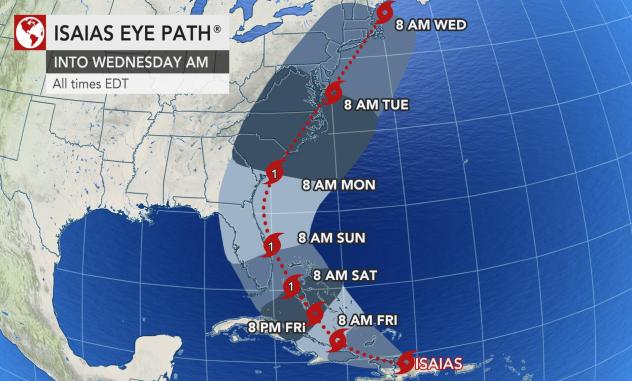