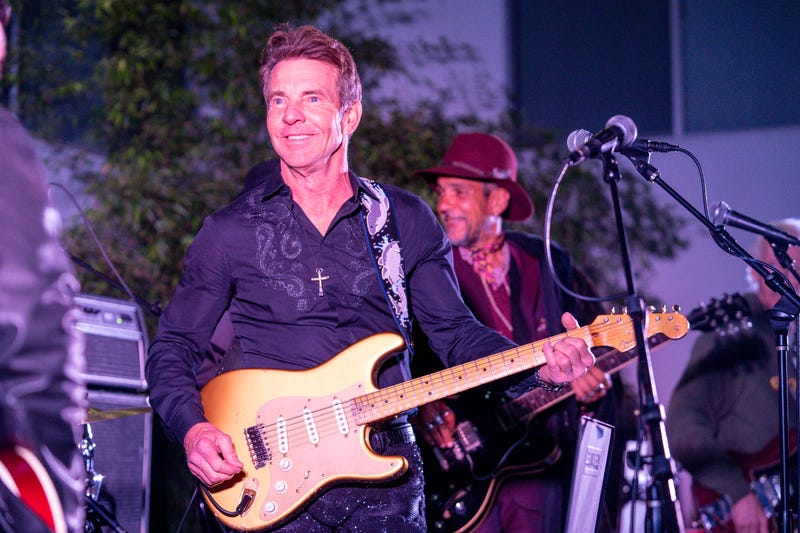 NEW YORK (1010 WINS) -- He’s probably most known for his roles in films like "Great Balls of Fire!" and "Any Given Sunday," but Dennis Quaid is also a singer and songwriter. This November 1st, he’ll be giving his first solo performance at Time Square’s Sony Hall.

In an exclusive interview with 1010 WINS, the two-time Golden Globe-nominee spoke about his upcoming ambitious venture into acoustic storytelling.

“Usually, [I’ve played] with the band behind me, but here it’s going to be me and the audience,” he said.

Fans of his performance in the Jerry Lee Lewis biopic 'Great Balls of Fire!' might be excited to hear that Quaid will be performing songs by Lewis too. “Jerry Lee was one of the teachers,” he said, “[Not only do] I have a lot of great stories about him, I love that music.”

With such a strong love for music, Quaid also admitted that at one point he thought music would become his career instead of acting. He said, “Music was my first love - and it still is - because it’s so immediate. [It] doesn’t require a crew and cameras and all that equipment. It’s an immediate satisfaction.”

He adds, “I consider doing the shows to really be a piece of theatre. While I was really lucky enough to be an actor - I love doing that too - but the music is such a great outlet.”

Quaid can next be seen playing the late President Ronald Reagan in a biopic aptly titled "Reagan," set to come out in 2022. While it’s clearly not his first time stepping in the shoes of such a massive figure, he called the role “the biggest challenge [of his] acting career.”

“I play him from the time that he was 38, because they could do a lot with the computers after the fact,” he joked, “until the time where he said farewell to the American people when he realized he had Alzheimer’s.”

“What an incredible life,” he remarked about Reagan. And the very same can be said for Quaid.

With numerous other onscreen projects lined up, the 67-year-old actor shows no sign of slowing down. Although his stint at Sony Hall is still a few weeks away, it won’t be the last time he dabbles in music. He’s got an album on the way too.

“That’s going to be out in April of next year,” he teased, “but [it] is going to be songs from my life. This won’t just be inspirational songs.”