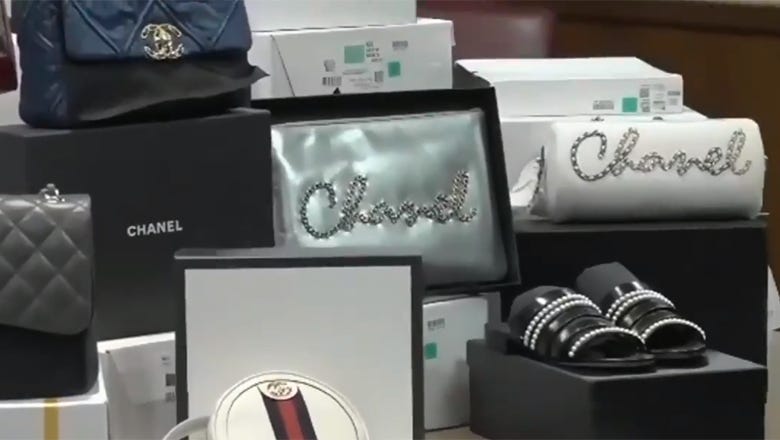 NEW YORK (1010 WINS) -- A Queens man is due to be locked up for more than a decade for pleading guilty to a multimillion-dollar heist of expensive designer merchandise from John F. Kennedy International Airport.

Gary McArthur, 44, was sentenced to up to 13.5 years in prison Tuesday for the May 2020 heist, which overall netted more than $4 million in goods. McArthur pleaded to holding more than $2.5 million in Gucci and Chanel items.

On May 17, 2020, officials said forged docs were used to gain access to a cargo facility at JFK. A crew drove away with trailers filled with high-end fashion items.

Queens District Attorney said investigators used various techniques, surveillance and GPS canvassing to track McArthur and others to a closed beauty salon believed to be used as a stash house for the items in Jamaica, Queens.

McArthur, along with David Lacarriere and Oscar Asencio, helped protect the items at the stash location, and were seen on video carrying bags with the items in and out, court records said.

When the officers went into the salon after obtaining a search warrant in June 2020, they found “mountains of boxes” filled with more than $2.5 million worth of Gucci clothes and bags, Chanel purses, jewelry and sunglasses and other designer goods, the DA’s office said. That was more than 4,000 items in total.

Lacarriere, of Manhattan, pleaded guilty in September and was sentenced to up to 11 years in prison. He and McArthur admitted to selling the items from the Queens property for cash.

According to prosecutors, Lacarriere was part of a heist of about $800,000 of Prada items in January 2020. He was apparently an ex-truck driver at JFK.

According to the New York Times, Lacarriere pleaded guilty in 2016 to conspiring to steal $700,000 worth of luxury items from Newark Liberty Airport.

Asencio, 33, of Queens, pleaded guilty in August and was sentenced to up to seven years in prison.

Katz added that the investigation found a weakness in the security of the air cargo industry, but in working with Port Authority and the TSA, changes were implemented.