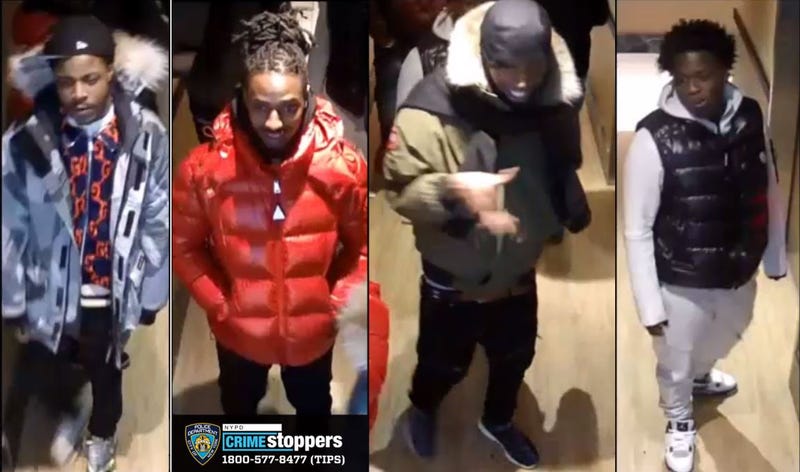 The suspects police are searching for. Photo credit NYPD
By 1010 WINS Newsroom

NEW YORK (1010 WINS) -- Police are searching for four people in connection with a shooting that left a 20-year-old man dead and two others wounded in Queens early Friday morning.

Officers responding to a 911 call around 1:10 a.m. on New Year’s Day found three men shot in front of the Umbrella Hotel, near the intersection of Queens Boulevard and 82nd Avenue, in Kew Gardens, police said.

One of the victims, identified by police as Robert Williams, 20, of Queens, was taken to NYC Health + Hospitals/Queens, where he was pronounced dead, the NYPD said. His death marked New York City's first homicide of 2021.

Police on Friday evening released photos of four suspects wanted in connection with the shootings. An investigation is ongoing.

🚨WANTED for HOMICIDE: These four individuals are being sought in connection to the fatal shooting of a 20-year-old victim on 1/1, at 1:11 AM, in front of 124-18 Queens Boulevard. Recognize them or have any info? Call or DM @NYPDTips at 800-577-TIPS. All calls are anonymous. pic.twitter.com/gHzLB1aIvr

The city saw four other shootings in the early hours of Jan. 1 as well, the NYPD said.