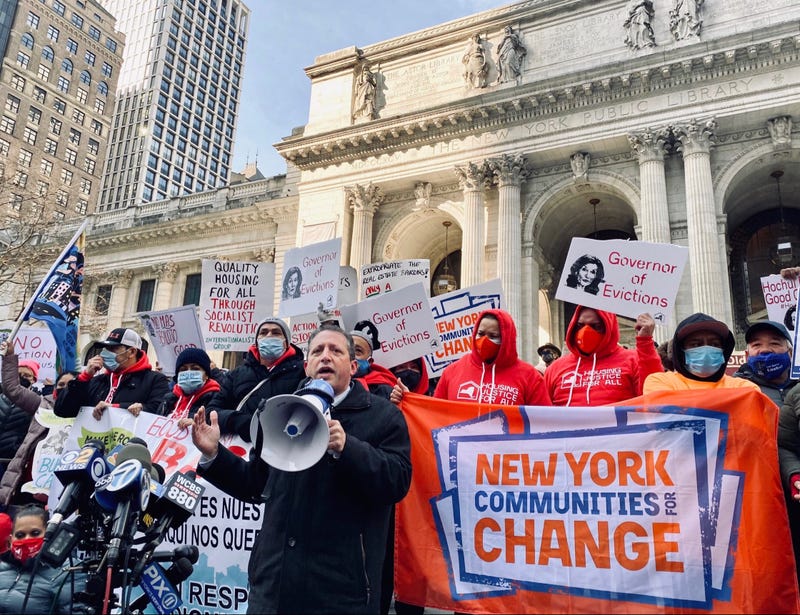 The march started at the New York Public Library and caused some traffic disruptions, with participants chanting “fight, fight, fight, housing is a human right!”

A better picture from the @1010WINS Jam Cam shows @NYPDNews with the crowd of #demonstrators CLOSING 3rd Avenue between E40th & 41st Streets in #MidtownEast near @GovKathyHochul's office.@WINSTRAFFICNYC pic.twitter.com/snQrsPcgxF

The moratorium, one of the longest lasting in the country, is set to expire Saturday. The state will once again let people applying for eviction protection and rent relief, with the portal opening earlier this week.

A state judge last week ordered New York to reopen the application portal for now, as the court considers a lawsuit filed by tenants and the Legal Aid Society. 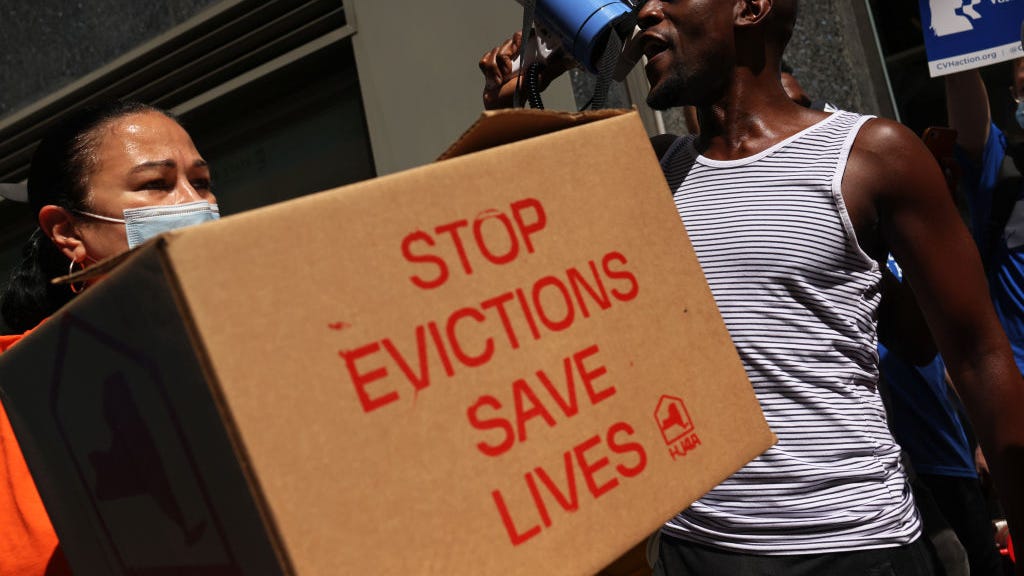 The advocates were joined alongside some public officials to put pressure on the governor, including Public Advocate and gubernatorial candidate Jumaane Williams and Comptroller Brad Lander. Some advocates were even arrested, according to PIX11.

No one should be kicked out of their home for no good reason, especially not during a pandemic.

Thank you to @housing4allNY for leading in this fight. pic.twitter.com/S5E1awcMld

“If it ends now, then we know tens of thousands of women and children of color in New York City are going to get evicted,” said Lander.

Those involved claimed unfair rent hikes will come with the end of the moratorium, and that a good cause eviction bill, which would let tenants renew leases and create a system for landlords and tenants to negotiate rent increases, would protect about millions of New Yorkers.

We must pass Good Cause Eviction now. It will keep families off the streets and save lives.

As always, I’m proud to stand with a wide range of advocates calling on Governor Hochul to do the right thing and stand with New York families. pic.twitter.com/oVNXZbXYgD

Protesters worried that without the good cause law, tenants who may have struggled to pay in a timely manner during the pandemic could be evicted now, or other “excuses” could be used to kick tenants out.

“You cannot allow a moratorium to lapse in the middle of winter, during a COVID surge,” said Williams.

Landlords have fought for the moratorium to end and more aid in order to pay their own bills.

Hochul's office responded in a statement, saying, "Governor Hochul has taken decisive action to protect tenants—from breaking the Emergency Rental Assistance logjam to pay or obligate more than $2 billion in rent relief, to investing $25 million in free legal services for tenants, to proposing a series of bold, achievable measures that address the housing affordability crisis in her State of the State of address. Governor Hochul will continue working with the legislature to protect tenants and keep New Yorkers in their homes."

New York has spent about half of $2.4 billion in federal funding for emergency rent relief. Much of the remainder has yet to reach landlords because, according to the state, it’s having trouble contacting landlords and tenants. “It’s time to end the eviction moratorium and put an end to tenants skipping the rent because there are no repercussions for not paying,” Strasburg said.