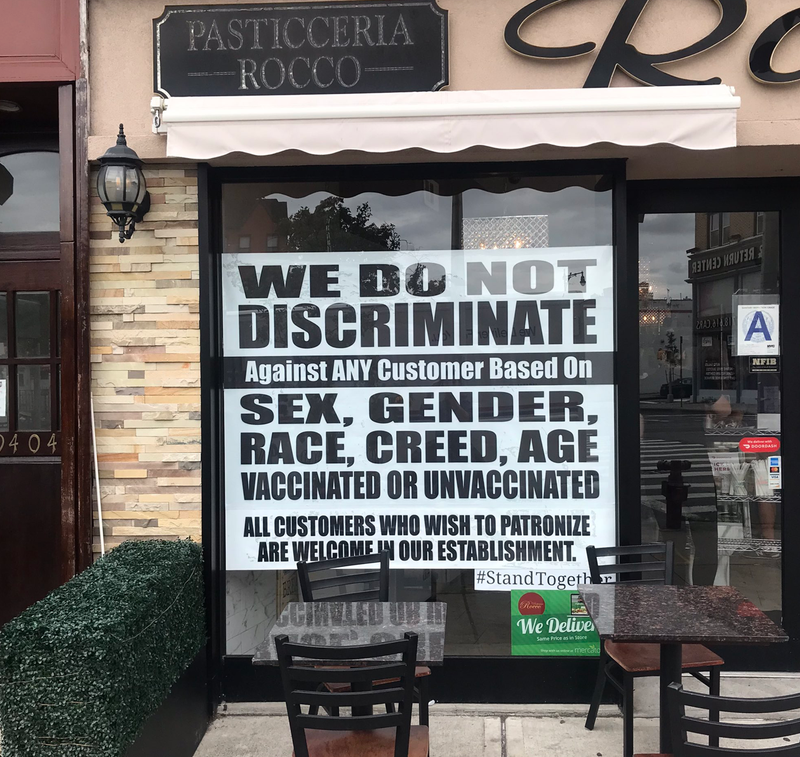 NEW YORK (1010 WINS) — Despite a city-wide order that requires anyone to show proof of vaccination to enter restaurants, gyms, bars and other indoor venues starting Tuesday, one Brooklyn bakery shop and diner manager said she's ignoring the mandate.

Mary Josephine Generoso, who manages Pasticceria Rocco in Bay Ridge, Brooklyn, told The New York Post that her decision is "not political," but rather to emphasize a push for "civil liberties and freedoms."

After Mayor Bill de Blasio announced the implementation of the “Key to NYC” program, with full enforcement beginning Sept. 13, Generoso put up a sign in the shop's window that states: "We do not discriminate against any customer based on sex, gender, race, creed, age, vaccinated or unvaccinated. All customers who wish to patronize are welcome."

Generoso admitted that she is not sure what she will do if city officials show up, though failure to comply with the mandate could levy a fine of up to $1,000 for a first offense with penalties increasing to $2,000 and $5,000 for repeat violations.

“It’s scary. I feel like we will be made an example of,” she said. “It is really hard to go up against a machine, and that’s what we are up against. Honestly, I put the sign up because I was hoping that other business owners would also have the courage to speak out. But it is mainly our customers who have reached out in support.”

The owner of Pasticceria Roccos Bakery in Brooklyn is not discriminating against people who are vaccinated or unvaccinated. pic.twitter.com/z8XwaQpsXG

However, some NYC restaurant owners and executives said they supported the city's enforcement rather than shutdowns.

“No doubt the vaccine requirement will pose challenges to restaurants, but all seem to agree we cannot go back to harsher restrictions and shutdowns," said Andrew Rigie, executive director of the NYC Hospitality Alliance.

Famed restauranteur and chair of the city Economic Development Corporation Danny Meyer announced last month would require proof of vaccination, ahead of the city mandate.

“We feel like we’ve got an amazing responsibility to keep our staff members and our guests safe, and that’s what we’re going to do,” Meyer said to CNBC.

According to de Blasio's order on Monday, 56% of city residents are fully vaccinated while 62% of residents have received at least one dose.