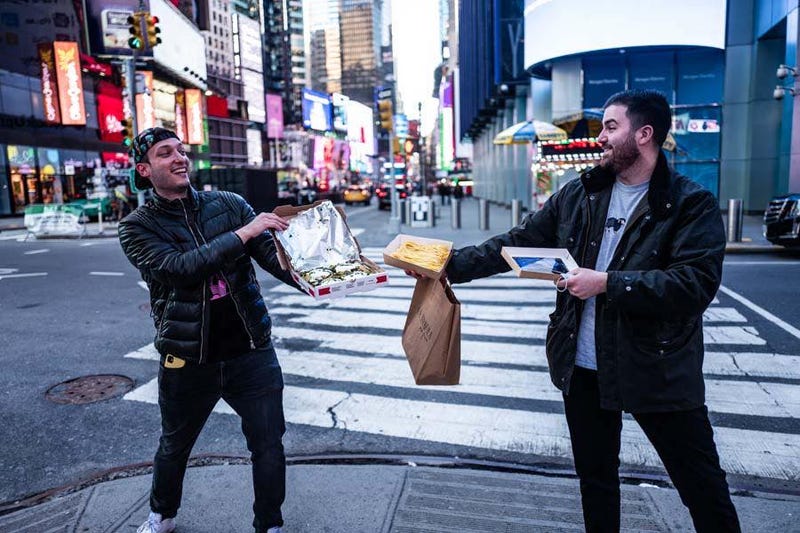 NEW YORK (1010 WINS) -- Gabriel Lamonaca was preparing to open a pizzeria in New York City last year when health officials confirmed the first case of COVID-19 in the five boroughs.

“I had always dreamed of opening up a pizzeria. I was working on it, I put everything together, investors, I was looking for a space… and then the pandemic hit,” the chef said in an interview with 1010 WINS. “So I was basically forced to stay home like everybody else.”

Not wanting to defer his dream completely, Lamonaca — who is a native of Rome — started baking pizzas in his Harlem kitchen.

Seeing other New Yorkers sharing the food they were baking and cooking in quarantine on social media sparked an idea: using a barter system to “sell” his pies in exchange for baked goods and other items.

“Unregular Pizza,” as Lamonaca dubbed the new venture, took off quickly, garnering mentions by outlets including Time Out, the New York Post and Eater New York.

Since the pop-up's launch, Lamonaca has swapped his Roman-style pizzas for offerings ranging from chocolate cake, kombucha and bottles of wine to more unconventional items like toothbrushes.

“A couple of weeks ago, I met with a dentist, and not only [did] he prepare a dish from Hong Kong where he originated from, but he also gave me two electric toothbrushes,” he said.

While the bartering system may not have worked pre-pandemic, it caught on at a time when most New Yorkers were staying home, he said.

“It was the right moment for that because during the pandemic, everybody was at home, and most of the people started cooking,” he explained. “And everyone became bakers and chefs at home, basically, so there was a lot of interest for people to share what they were creating at home.”