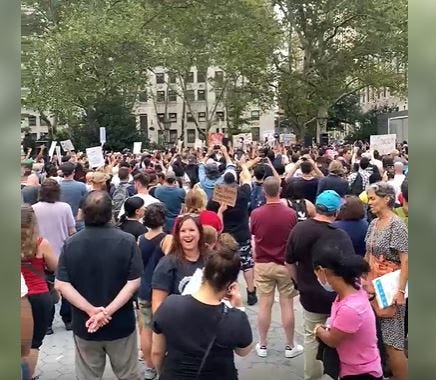 Chanting “we will not comply” and “save New York,” the civil servants eventually marched over the Brooklyn Bridge, blocking traffic.

The protest was organized by Teachers for Choice, a group of city teachers and parents opposed to medical mandates as requisites for employment, and featured several anti-vaccination speeches.

Del Bigtree speaking at Anti-mandate Protest in Foley Square "I told you over 7 months ago, this vaccine does not work"

When interviewed and reporters say that he doesn't have a medical license, he responds "That's why it's so terrifying that I'm the only one getting it right" pic.twitter.com/XaPxsZBPy9

Hundreds are gathering in Foley Square to protest the vaccine mandates imposed by the President and NYC. The rally is coordinated by Teachers For Choice. @News12BK @News12BK pic.twitter.com/Jrdo9oplLO

About 65% of the city’s workforce received at least one vaccine dose as of Sept. 7; that’s significantly lower than the 79% of the city’s adult population who have received one shot, according to city data.

The protest came as public school students returned to classrooms, where about 72% of Education Department staff are vaccinated, city data show.

De Blasio has steadfastly supported his vaccine mandate and order for city workers to return to the office, citing the effectiveness of the shots in stopping the spread of the delta variant and the studies that have proven the jabs to be safe.

The mayor on Monday said the return to work order would likely drive up vaccination rates.

“We have all the facts behind us. It's time. The people need their public servants back at work fully. We need to maximize vaccination, the best way to do that is with people in-person,” de Blasio said at a news conference. “If there's any particular problem in any particular site, we'll address it as we always have.”

Speakers at the event disregarded scientific evidence showing that the vaccines are safe and effective, like Del Bigtree, the head of the anti-vaccination group Informed Consent Action Network.

"I told you over seven months ago, this vaccine does not work,” said Bigtree, who noted he has no medical license: “that’s why it’s so terrifying that I’m the only one getting it right.”