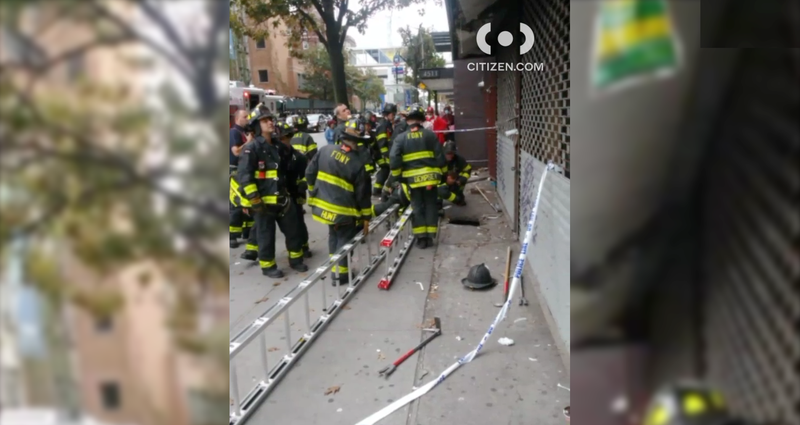 NEW YORK (1010 WINS) -- A man had to be rescued after he was swallowed by a sinkhole that opened up in a Bronx sidewalk on Saturday afternoon, officials and witnesses said.

The 33-year-old was standing in front of a dental office on Third Avenue, near E. 183rd Street in the Belmont section, just before 12:30 p.m. when the sidewalk gave way and he fell 12 to 14 feet.

“He was saying ‘help,’ but it was like faded, you know, like he was at the same time almost gasping for air,” said Alexander, who works at a bodega on the corner.

It took about 30 or 40 minutes for the FDNY to extricate the man. Citizen App video shows firefighters surrounding the hole.

He suffered minor head injuries and was taken to St. Barnabas Hospital, which is right across the street.

Alexander said he has worried about that part of the sidewalk.

A 33-yr-old man standing on the sidewalk on Third Ave in the #Bronx falls about 12 feet into a sinkhole. @NYPDnews says he has minor injuries. Right across from St. Barnabas Hospital. Hole now covered by a cut store gate. @NYC_Buildings on the scene. #1010WINS pic.twitter.com/0Yj0XUSyeG

“We try to avoid just kind of stepping on it,” he said. “But it was bound to happen.”