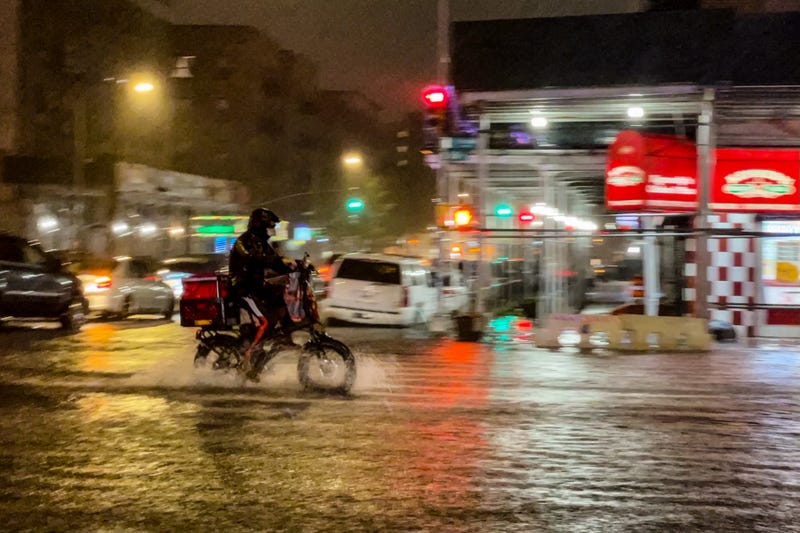 A delivery worker makes their way in the rainfall from Hurricane Ida during a flood on Intervale Avenue on September 1, 2021, in the Bronx borough of New York City. Photo credit David Dee Delgado/Getty Images
By Brian Brant

NEW YORK (1010 WINS) — As widely expected, the New York City Council passed a series of bills to increase the protections and rights of food delivery workers.

These bills will allow delivery workers access to use restaurant restrooms, ensure tips are fairly delved out and offer limits to their delivery route as well as their minimum payments per trip.

The measures will now head to Mayor Bill de Blasio, who previously said he would sign it.

Ahead of the scheduled votes, de Blasio argued Thursday the legislation was important to the rights of these workers who have "gone through so much" during the COVID-19 pandemic.

"All working people have and anything we can do to lighten the burden to make their lives a little easier to help them recover, we want to do, I know the City Council feels that strongly," he said during his daily briefing. "We've been working together on this legislation, and I look forward to supporting it."

IMMIGRANT DELIVERY WORKERS SHOWED THE POWER OF ORGANIZING AND PROMPTED ACTION FROM THE CITY COUNCIL TO HOLD ACCOUNTABLE APP COMPANIES.

“The basic human dignity of delivery workers, many of whom are immigrants, has been ignored for too long across the country,” he said in a statement. “New York City is taking the lead in transforming this industry with a legislative package that will give deliveristas the rights they deserve.”

The City reports NYC is now expected to be the first major U.S. city to set minimum pay standards for app-based couriers, amid lawsuits from DoorDash, GrubHub and Uber Eats over previous regulation.

However, Grubhub supports these reforms, according to The City.