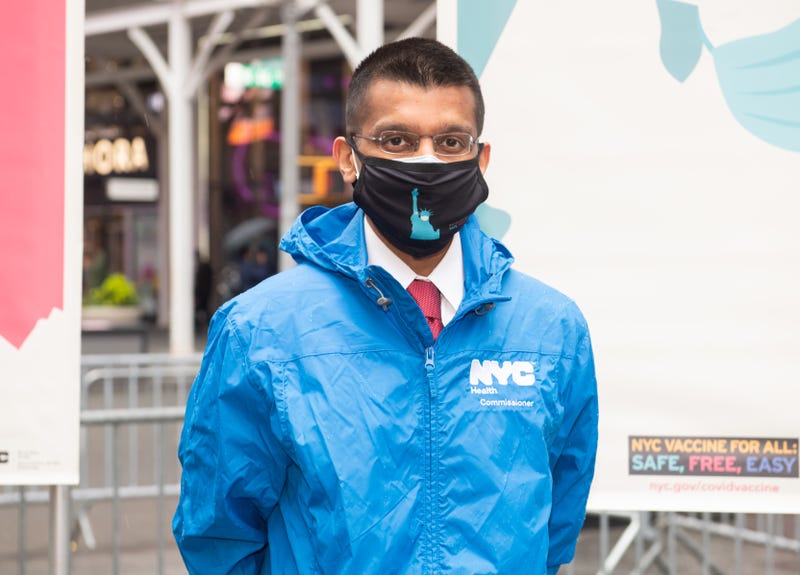 Commissioner of the New York City Department of Health and Mental Hygiene Dr. Dave A. Chokshi attends the opening of a vaccination center for Broadway workers in Times Square on April 12, 2021 in New York City. Photo credit Noam Galai/Getty Images
By David Caplan

NEW YORK (1010 WINS) -- The Biden administration will soon announce that most Americans will need a booster COVID-19 vaccine shot eight months after being fully vaccinated, according to reports late Monday night, and New York City is prepared for such a mandate.

Dr. Dave Chokshi, New York City's health commissioner, said Tuesday morning, "we have been preparing for the possibility that booster doses will be recommended for either certain sub-populations or for a broader set of New Yorkers who have already either gotten the single dose or two dose MRNA vaccines, so those preparations are underway.

Chokshi said of the preparations, "They will rely on the infrastructure we have built up over the last several months particularly the health care infrastructure."

He added, "The timeline that we should expect for New Yorkers to get administered booster doses is sometime in September but we will be ready for that eventuality.

Waning immunity of the vaccine and the highly transmissible delta variant have fueled the Biden administration's decision.

An announcement by the White House could be made as early as this week, The Washington Post reported, citing four people familiar with the decision.

The boosters would not be distributed until mid-to-late September, according to the Post.