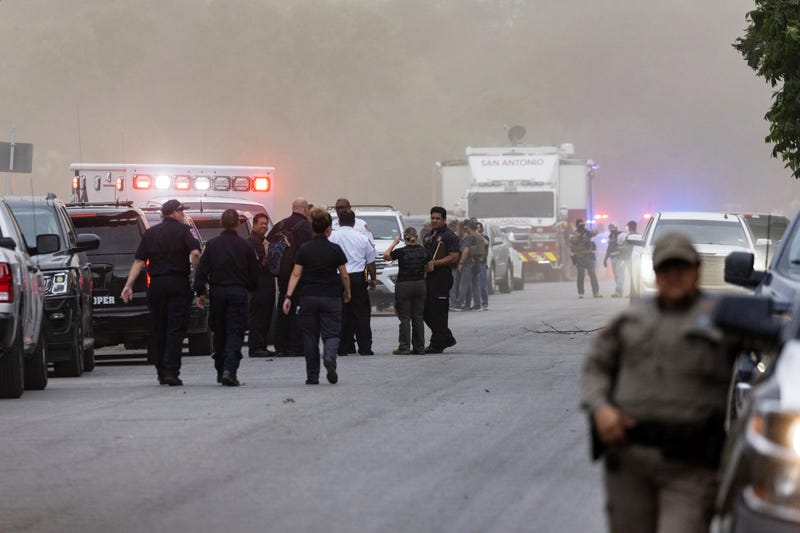 Law enforcement work the scene after a mass shooting at Robb Elementary School on May 24, 2022 in Uvalde, Texas. Photo credit Jordan Vonderhaar/Getty Images
By Adam Warner

NEW YORK (1010 WINS) – Gov. Kathy Hochul said Wednesday that state troopers will be visiting schools across New York daily until the end of the school year, as officials in New Jersey and Connecticut announced schools in their states would also see increased police patrols after a gunman killed 19 children and two teachers at a Texas elementary school.

Hochul said she convened an emergency meeting with state police on Wednesday morning and that troopers will be keeping an eye on schools across New York through the end of the school year.

“I said I want state police patrols visiting our schools, doing daily check-ins every single day from today to the end of the school year,” the governor said while delivering remarks at a meeting on illegal gun trafficking.

This morning, we convened an emergency meeting with @nyspolice to ensure we’re doing everything possible to protect our schools.

State Police will increase patrols and conduct daily check-ins at schools from today through the end of the school year.

I'm heartbroken for the victims of today's horrific shooting in Texas.

You should be able to go to school, and to church, and to the grocery store without needing to worry that you're not going to come home. It’s past time to put an end to these needless tragedies.

A clearly shaken governor also spoke about the Texas shooting, which was the deadliest U.S. school shooting since the one at Sandy Hook Elementary School in Connecticut in 2012.

“The children of today have been through so much,” Hochul said. “They don’t deserve that. They’re innocent. They look to adults to be responsible. They look to us to protect them. And they have the right to be protected by the adults who govern this country.” 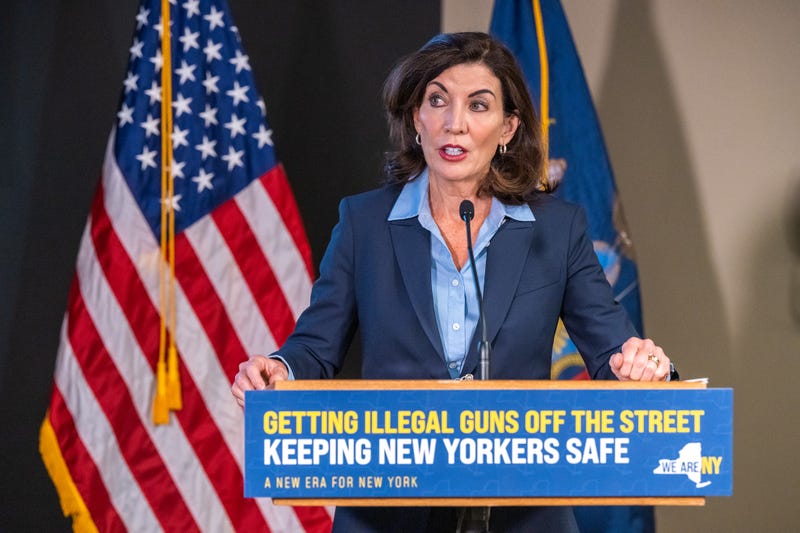 Gov. Kathy Hochul said state troopers will do daily check-ins at schools across the state until the end of the school year. Photo credit Darren McGee/ Office of Governor Kathy Hochul

The governor said there’s been an “abdication of responsibility” by elected leader on combatting gun violence.

“Just this morning, as we’re reeling with the pain, I’m asking myself as governor, ‘Am I supposed to just leave all the flags at half-mast?’ They’re still at half-mast from Buffalo,” Hochul said, referring to the mass shooting at a Buffalo supermarket on May 14. “No, I don’t want to—so we harness this anger.”

When it comes to illegal guns entering New York state, Hochul said they are “just flowing in from Pennsylvania.” She said a new task force has seized more than 4,100 firearms this year and that more than 300 investigations are underway.

Hochul also said she wants to work with the state legislature to increase the legal age of buying a firearm to 21 years old. "At a minimum the AR-15s, but I want to take a look at everything," she said.

Additionally, the governor said she's open to calling a special legislative session to pass a new law if the U.S. Supreme Court overturns the state's concealed carry law. "I'll do whatever I have to do to protect the people of this state," she said.

Right now, in the state of New York, an 18-year-old can buy an AR-15 without a license.

That's wrong and I’m going to work with the legislature to change that.

Hochul tweeted earlier that she was "heartbroken for the victims" of the shooting and vowed to leave "no stone unturned to put an end to gun violence." She urged Congress to "do the same."

“We pour so much into our children, our children mean everything to us,” Adams said. “You have to ask yourself, ‘What have we become as a country?’”

Join me, @NYPDPC Sewell and @DOEChancellor Banks at 1 Police Plaza to talk about keeping guns off our streets and out of our schools. https://t.co/AylVqP1W1m

The mayor showed guns that were recently confiscated from teenagers at city schools, including a .380 caliber semiautomatic pistol that was in the backpack of a 13-year-old boy and two 9mm handguns found in the bag of a 15-year-old boy.

“And guns keep coming,” Adams said. “It doesn’t matter how much we take off the streets, there’s an endless flow of guns on our streets—guns in the subway and guns in our schools.”

The mayor said police have removed 2,900 guns from streets in recent months but there’s “so many more guns out there.”

Since the start of the school year last fall, safety agents have recovered 20 guns in schools, officials said. That’s a 300% increase from the five guns that were recovered during the previous school year.

In total this school year, safety agents have recovered 5,546 “dangerous instruments,” which is a 124% increase over the last pre-pandemic school year of 2018­­–2019, when 2,473 such weapons were recovered over the same period. 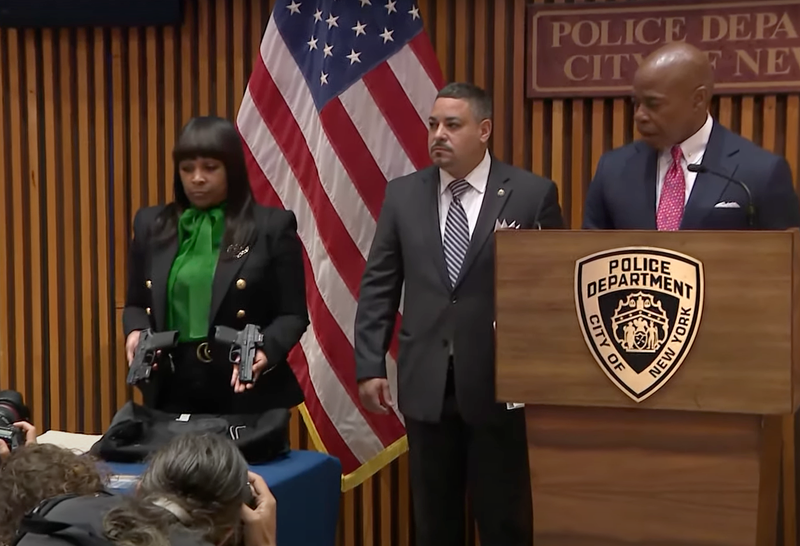 Adams said the city wants to “mobilize” parents “in this partnership of saving our children.” He said it’s about caregivers making sure they’re “being aware, being involved and being direct.” He wants them to have an “honest conversation” with kids, because “these guns are being placed in the hands of their babies.”

Banks said officials have found that students caught with weapons in the city’s schools often have them because they fear for their safety coming to and from school grounds, not because they want to harm someone at their school.

Banks said he’s calling a meeting with union leaders next week to “come up with some of the best ideas we can” to keep students safe.

The news coming out of Uvalde, Texas, with reports of multiple elementary students murdered, is horrifying.

Every single day we are confronted with the names and faces of young people who lost their lives to gun violence.

Banks said he spoke with the head of the city's principals union, who suggested that the front doors of schools should be locked.

“Our students, their families and caregivers, teachers, and school administrators should feel safe in school, and be assured that New Jersey’s law enforcement agencies will do everything in their power to protect them,” Platkin said in a statement.

Heartbroken by today’s elementary school shooting in Uvalde, Texas. No child or educator should ever fear going to school, and no parent should ever fear sending their child to school. We must end our nation's gun violence epidemic.

Gov. Phil Murphy tweeted that currently “there are no credible threats” to schools.

“We will do everything in our power to ensure students, parents, and educators feel safe at school,” the governor wrote.

At a press conference, Murphy renewed his calls for additional gun reform included in a legislative package he first proposed in April 2021.

In four years, I am proud of the progress we’ve made to become one of the nation’s leading states on gun safety. But I’m not satisfied – and those standing with me aren’t satisfied – with being “one of.”

“From Uvalde (Texas) to Buffalo, recent tragedies have reaffirmed that, in the absence of substantive reform, no community is immune to the epidemic of gun violence,” Murphy said.

“The senseless murders in Texas should fortify our resolve to take action today – to avoid similar horrors not through empty words and promises, but through concrete measures to make every classroom and neighborhood safer,” he said. “Our children, as well as the teachers who devote their lives to their education and safety, deserve nothing less.”

On Long Island, officials in both Nassau and Suffolk counties said they would increase patrols at schools.

Nassau County Executive Bruce Blakeman and county police Commissioner Paddy Ryder released a joint statement, saying, “While there is no nexus or specific threats to Nassau County, we continue to work with our federal, state and local partners as we continue our assessment. The Police Department is intensifying its patrols around all schools.”

Police Commissioner Patrick J. Ryder and I send our condolences to the victims and their families after today’s horrific shooting in Uvalde, Texas.

Suffolk Police Commissioner Rodney Harrison also released a statement, saying, “While there are currently no credible threats in Suffolk County, the department is monitoring the ongoing investigation and will be increasing patrols around school buildings out of an abundance of caution.”

In Connecticut, where a gunman killed 20 children and six adults at Sandy Hook Elementary in Newtown in December 2012, a number of school districts are increasing security.

Among the communities upping their police presence are Fairfield, West Hartford, Norwalk, Naugatuck, Stonington, Windsor Locks, Ledyard and Bethel, according to NBC.

Fairfield police said: “No matter the distance between us, communities across the country are left feeling unsettled. Fairfield is certainly no exception and we take seriously our responsibility to ensure our residents, employees and visitors are all able to feel safe within our community and within our schools.”

Our thoughts and prayers are with the staff and students of Robb Elementary School, their friends and family, the First Responders at the scene, and the community at large. Expect an increased presence of Norwalk Police Officers at our schools; we remain vigilant. pic.twitter.com/Lcdbu9Fykh

Gov. Ned Lamont released a statement saying in part, “We clearly have a gun problem in America. There are more damn guns on the street than ever before, especially illegal guns. We must test our capacity as a nation in this moment to strengthen public safety and health.”

One life taken by gun violence is too many, but 15 innocent lives, including 14 children, is an utter tragedy.

Speaking at the Connecticut State Capitol on Wednesday, Lamont said he wished Congress would follow his state’s lead.

“That AR-15 they used in Buffalo would not be able to be purchased here,” the governor said. “We would have background checks. But it doesn’t work if we’re doing this on our own. We can make a difference, but we really need the federal government to look up and see what’s working in Connecticut and what can work elsewhere.”

According to officials in Texas, an 18-year-old gunman killed 19 children and two teachers at Robb Elementary School in Uvalde on Tuesday. There were also “several injuries,” police said.

Lt. Christopher Olivarez of the Texas Department of Public Safety said Wednesday that all the victims were in the same fourth-grade classroom.

The killer “barricaded himself by locking the door and just started shooting children and teachers that were inside that classroom,” he said. “It just shows you the complete evil of the shooter.”

The gunman was killed by a Border Patrol agent who rushed into the school without waiting for backup, a law enforcement official told the Associated Press.

Investigators believe the gunman posted photos on Instagram of two guns he used in the shooting, and they were examining whether he made statements online in the hours before the assault, a law enforcement official said. 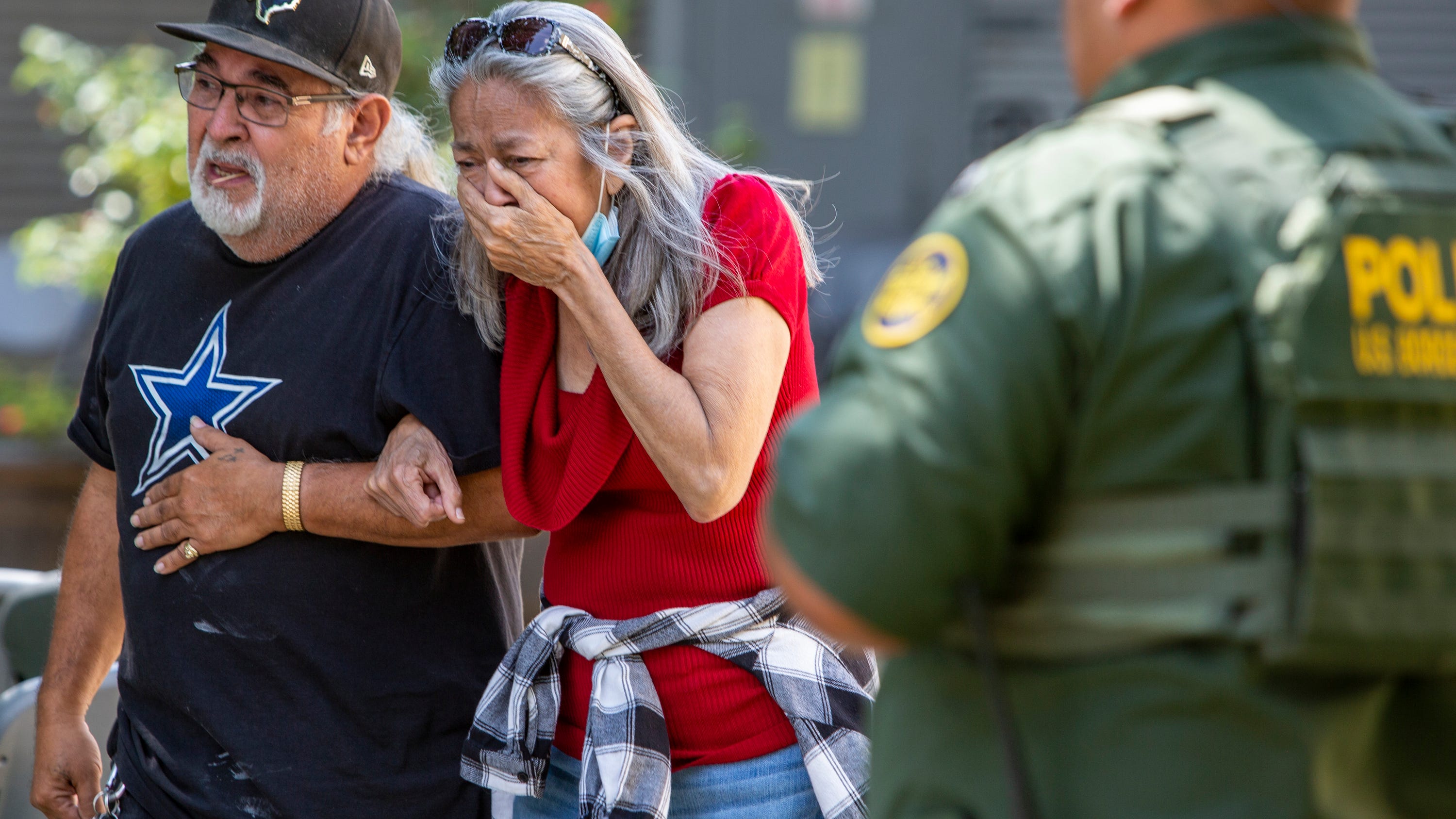 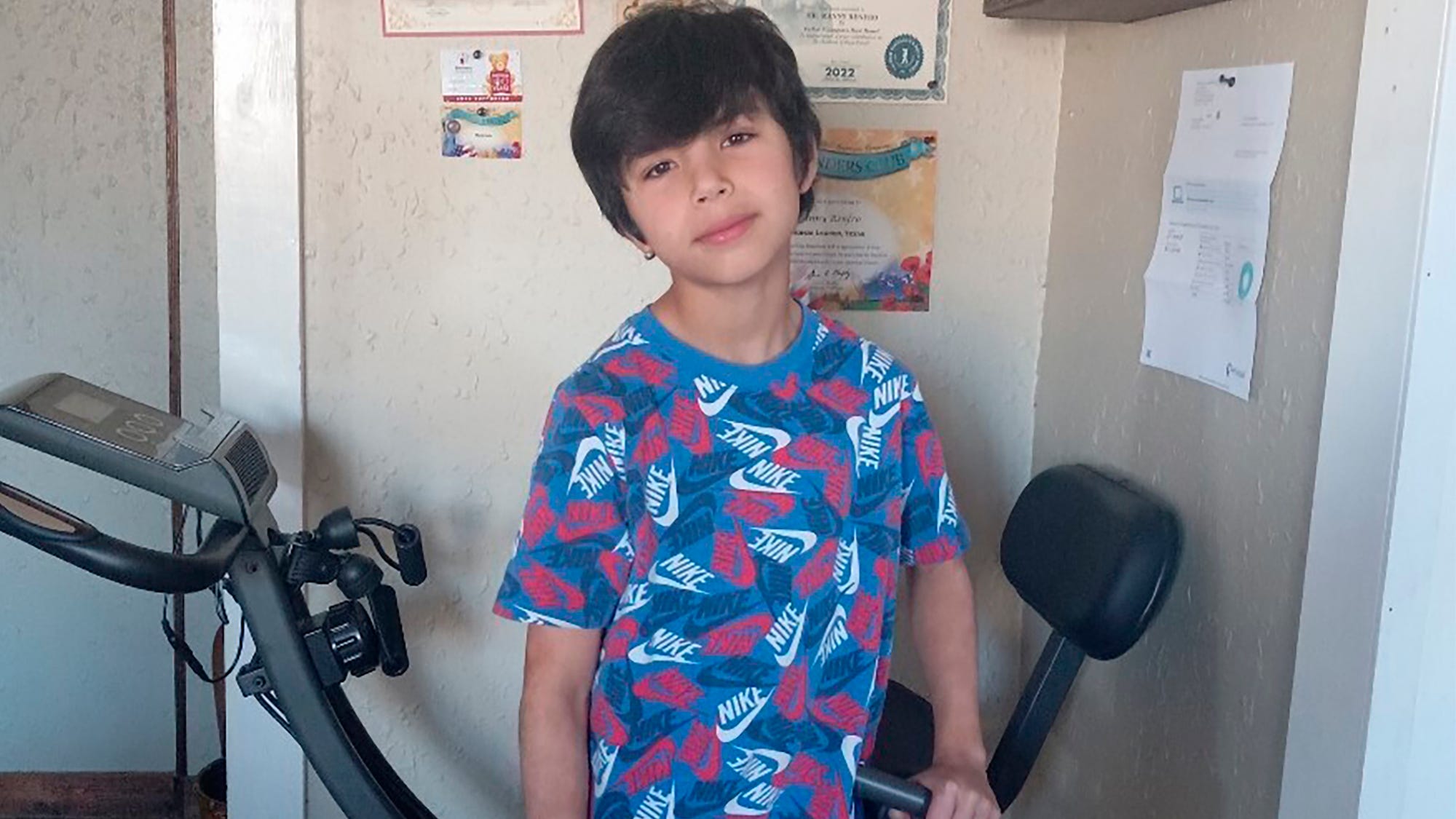 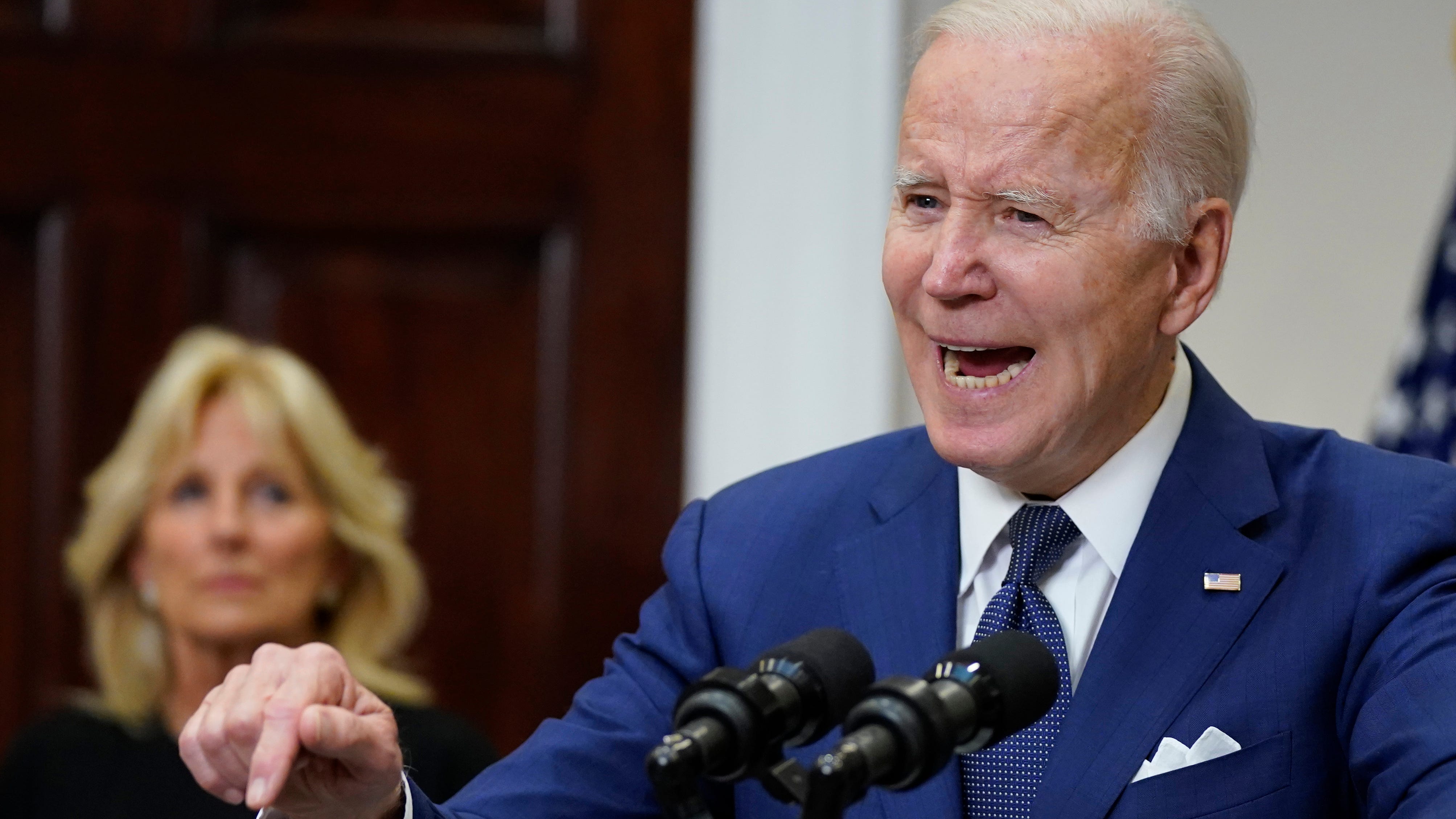 Biden says 'we have to act' after Texas school shooting