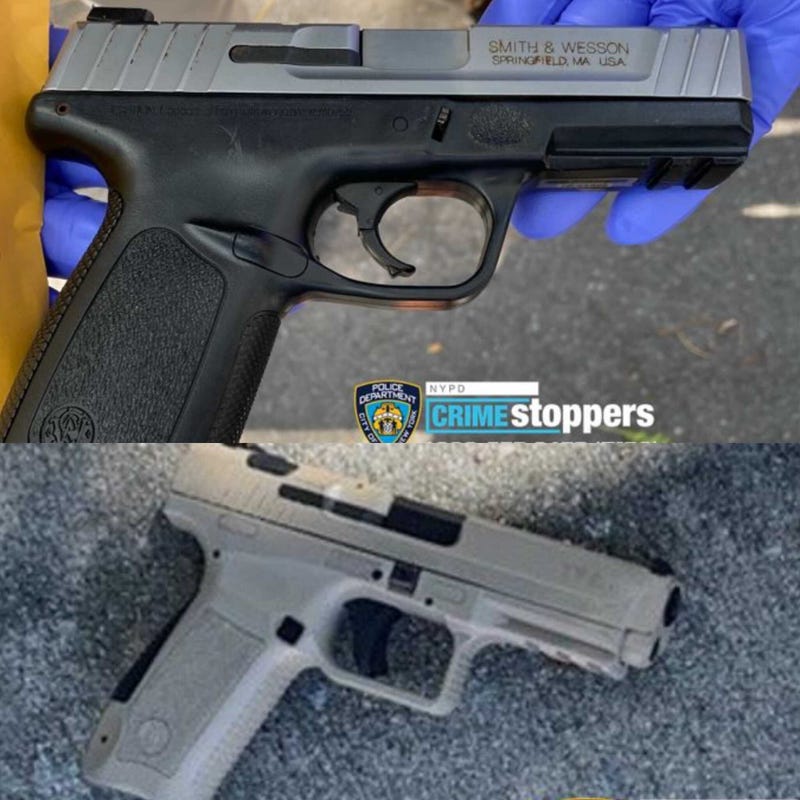 NEW YORK (1010 WINS) -- A 24-year-old man was fatally shot by police during a pursuit in Queens on Thursday NYPD Chief of Department Terrance Monahan said.

These are the two guns recovered at the scene. pic.twitter.com/dg8vDm1iDq

According to Monahan, officers with the NYPD Violent Felony Warrants Squad were watching a home after receiving information a suspect wanted in connection with a September shooting was in the house.

The 24-year-old man who police said matched the suspect's description exited the home and got into a white vehicle.

A car chase ensued with the suspect driving for about a mile before colliding with a black car on the street.

Police said the suspect, who was on parole, brandished two handguns and a "foot pursuit" began.

He ran about two blocks and "the officers can be heard on body-worn camera was telling the suspect numerous times to drop the guns", Monahan said.

The man then fired at least four times at the officers in pursuit.

Police returned fire, shooting the suspect in the chest and and in the arm.

He was taken to Jamaica Hospital in critical condition where he later died, police said.

The suspect was "on parole and has numerous prior felony convictions including one for criminal possession of a loaded fire arm," Monahan said.

Seven officers fired their weapons and were all taken to the hospital for evaluation only.

They were taken to North Short University Hospital where they are being treated for tinnitus.

Police recovered two guns at the scene, adding that one gun found in the man's hand was fully loaded but had jammed.

"Fortunately this individual did not harm anyone in the public or any of our officers today," Monahan added.

Street closures are expected and the public has been asked to avoid the area as an investigation remains ongoing.

Due to a police involved shooting, please avoid the area of 182 Street and 144 Avenue in Queens.

Expect a police presence in the area, as well as road closures and traffic delays. pic.twitter.com/TQLrIDcGG6