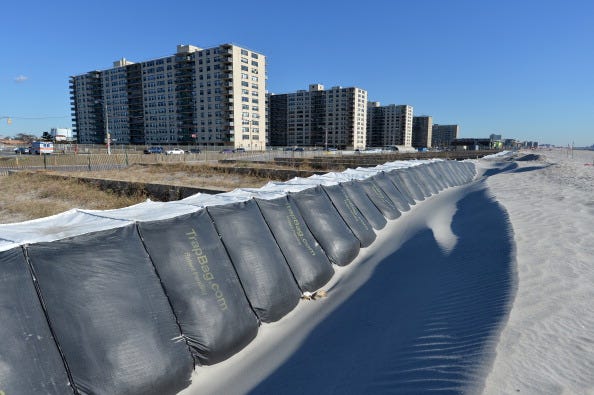 “Eight years ago, Hurricane Sandy devastated our city and our shoreline,” said Mayor Bill de Blasio. “We committed to building back stronger than ever, and I am thankful for our federal and state partners for working together to make this critically important project come to life. Together, we are protecting our shoreline and creating a more resilient New York City.”

The Rockaways – Atlantic Shorefront Project aims to protect communities and strengthen the shoreline along six miles of the Rockaway Peninsula which. was devastated after Sandy in 2012.

The project, led by U.S. Army Corps of Engineers, consists of a reinforced dune system designed to block storm surge and new and extended tapered groins.

These stone groins are jetty-like structures extending out into the ocean intended to trap sand and reduce beach erosion and help maintain a critical natural buffer between the Atlantic Ocean and local communities.

“Climate change is already impacting our everyday lives, and the Rockaways are at the forefront of damaging flooding from strong and more frequent coastal storms driven by warmer temperatures,” Cuomo said. “New York State is proud to partner on this project as part of our ongoing efforts to help New York City and communities across the state build back stronger, smarter, and more resilient.”

More than 1,000 structures on the Rockaway Peninsula were either substantially damaged or destroyed by the storm surge, which reached a height of 10 feet.

Additionally, approximately 1.5 million cubic yards of sand was displaced from Rockaway Beach and deposited on adjacent communities or washed out to sea. Shortly after Sandy, the U.S. Army Corps of Engineers placed approximately 3.5 million cubic yards of sand back onto Rockaway Beach to restore the project to its original design profile and improve resiliency against erosion and coastal flooding.

The construction of this project would be fully funded by the Federal government and will be critically important to protecting coastal communities from flooding, severe weather events, and other impacts in the Rockaways caused by climate change.

The first phase of construction will include the construction of 14 new stone groin structures and the rehabilitation of five existing groins on the Atlantic Ocean side of the Rockaway Peninsula.

The new stone groins will provide stabilization for a re-nourished sand beach and dune and maintain the protective beach profile.

These improvements will also help restore local ecosystems and ensure the long-term viability of endangered species like the piping plover and sea amaranth.

The second phase of construction will include the construction of a reinforced dune system that will strengthen the shoreline against coastal storms, which are growing more frequent and more destructive due to climate change.

The dunes will be constructed with armor stone and steel sheet pile walls at their core, which will reduce wave breaking pressure and limit storm surge inundation and cross-peninsula flooding. All public access points across the dunes will be rebuilt using resilient materials.

"As we experience frequent extreme weather events and face the threat of climate change, this project will protect communities along the Rockaway peninsula and Rockaway Beach, a shoreline used by millions of visitors each year.”