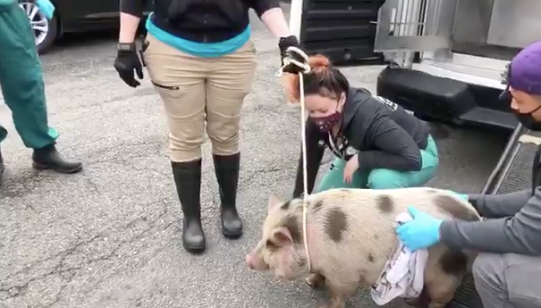 NEW YORK (1010 WINS) -- An animal welfare organization rescued a pig — who has since been dubbed “Peppa” — from a backyard in Brooklyn on Wednesday.

Animal Care Centers of New York workers took the hog into their custody after someone found her in a backyard early Wednesday morning, the organization said on social media.

Look who we took in this morning! Peppa was found literally hanging out in a Brooklyn backyard. Imagine waking up to that site! PS Pigs are illegal to have as pets in NYC🐷 pic.twitter.com/RkyQDhkMk4

It wasn’t clear how Peppa ended up in the yard, but her rescuers speculated that she may have been kept as a pet.

“We aren’t sure where she came from and we don’t want to make any assumptions, but it could be that Peppa grew too big for her family to keep,” ACC wrote on Instagram. “Or perhaps it was that they realized pigs are illegal to have as pets in NYC!”

“Don’t worry, we found placement for Peppa,” the organization added. “When it comes to having a pet, we recommend adopting a legal one from ACC!”