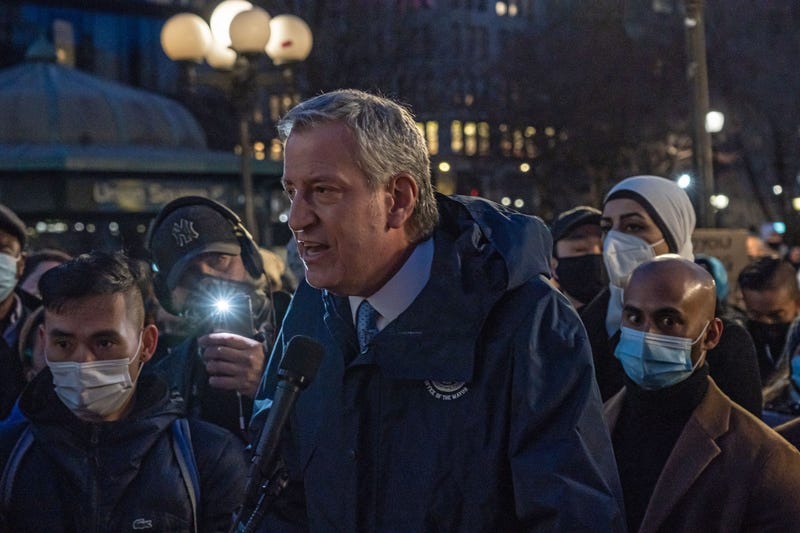 Warning: The videos below contain profanity.

NEW YORK (1010 WINS) – Mayor Bill de Blasio was heckled and his motorcade surrounded by protesters at a vigil to mourn the victims of this week’s Atlanta spa shootings and denounce hate against Asian Americans.

Video on Twitter shows protesters shouting, “What are you going to do about it?” as the mayor spoke at the Union Square vigil Friday night.

A number of protesters also shouted as they surrounded the mayor’s motorcade, video shows.

Mayor Bill de Blasio is chased away by some hostile protesters at the #StopAsianHate rally in Union Sq park pic.twitter.com/QDjxWj1knF

The crowd gathered at Union Square three days after a gunman was accused of killing eight people at three Atlanta-area massage businesses Tuesday. Six of the victims were of Asian descent. Hate crime charges have not been filed against the suspect.

The shooting came amid a surge in hate crimes against Asian Americans nationwide, including in New York City.

At a vigil for the Atlanta shooting victims in Union Square tonight with Evelyn - so many people coming together to both mourn and express solidarity. 🙏 #StopAsianHate pic.twitter.com/DU9P9zy4nC