"Well if I had to pick somebody in the world — not only a professional boxer — I'll take a pass on the professional boxer that can be a very dangerous subject," Trump said. "But if you said I I had to box somebody, I think probably my easiest fight would be Joe Biden because I think he'd go down very, very quickly...I think Biden would go down the first few seconds."

His comments came during a final press conference event ahead of his anticipated commentary gig for the Evander Holyfield vs. Vitor Belfort match at the Seminole Hard Rock Hotel and Casino in Hollywood, Florida, on Saturday. 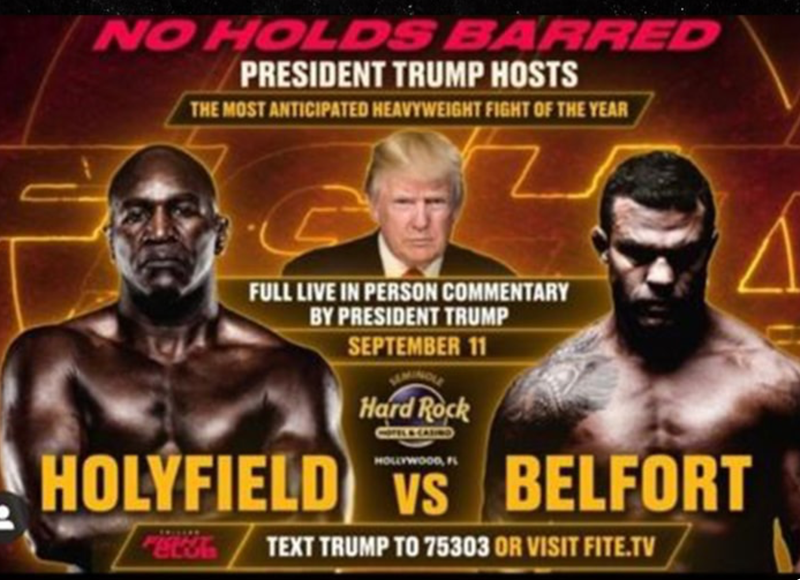 Trump picked Biden after being asked who he would pick to fight in a hypothetical match and what the fight would look like.

President Trump called into a press conference for the Evander Holyfield fight on Sept. 11 to take questions via phone (Don Jr. was there in person) about boxing, his favorite boxing matches, and who, of the boxers on stage, if he "had to" choose, would he fight in the ring pic.twitter.com/EVsw9hryIe

The former president's schedule choice has raised some eyebrows — coinciding with the 20th anniversary of the 9/11 attacks.

Trump will appear alongside his son Donald Trump Jr. on a "gamecast" of the event, according to ESPN.

"I look forward to seeing both this Saturday night and sharing my thoughts ringside," Trump said in announcing his commentary role. "You won't want to miss this special event."