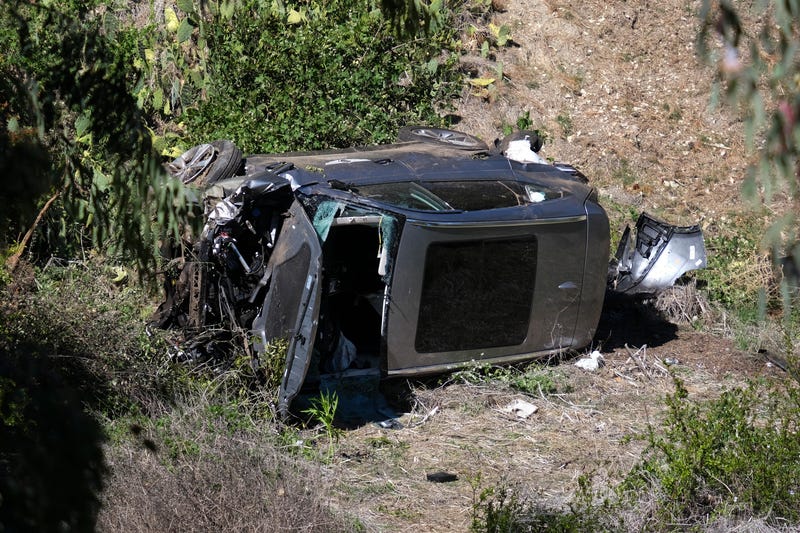 A vehicle rests on its side after a rollover accident involving golfer Tiger Woods along a road in the Rancho Palos Verdes section of Los Angeles on Tuesday, Feb. 23, 2021. Photo credit AP Photo/Ringo H.W. Chiu
By 1010 WINS Newsroom

VIDEO UPDATE: Surveillance video (below) obtained by TMZ Sports shows Tiger Woods driving Tuesday morning minutes before his crash. The video was shot at 7:05 a.m. -- 911 received its first call about the crash at 7:12 a.m. Driving along Hawthorne Blvd., Woods is in the Hyundai Genesis behind a minivan, and he does not appear to be driving overwhelmingly fast.

NEW YORK (1010 WINS) -- A rollover crash in Los Angeles County Tuesday morning left Tiger Woods with serious leg injuries, and the golfer was "awake, responsive, and recovering in his hospital room" by Wednesday morning, officials and his manager said.

Woods was alone in an SUV on the border of Rolling Hills Estates and Rancho Palos Verdes when it crashed into a raised median shortly before 7:15 a.m., crossed two oncoming lanes and rolled over several times, authorities said at a news conference Tuesday evening.

No other cars were involved. Woods was alert and able to communicate as firefighters pried open the front windshield to get him out.

The airbags deployed, and the inside of the car stayed basically intact and that “gave him a cushion to survive the crash,” Los Angeles County Sheriff Alex Villanueva said. Both of his legs were severely injured, county Fire Chief Daryl Osby.

Images showed the SUV on its side, with its front end heavily damaged, just off the side of a road near a hillside. An ambulance took the 45-year-old to a hospital, authorities said. 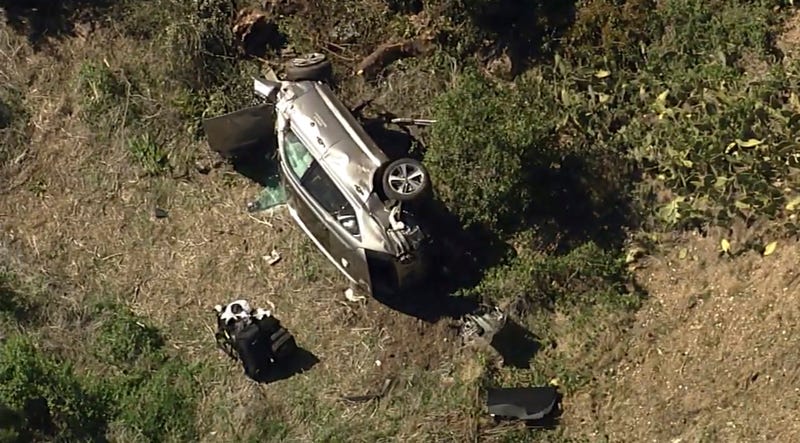 “Tiger Woods was in a single-car accident this morning in California where he suffered multiple leg injuries," his manager, Mark Steinberg, said in a statement Tuesday afternoon. "He is currently in surgery and we thank you for your privacy and support.”

A statement posted to Woods' official Twitter account early Wednesday morning (full statement at bottom of story) said Woods had "undergone a long surgical procedure on his lower right leg and ankle after being brought to the hospital." Woods was "awake, responsive, and recovering in his hospital room" with "significant orthopedic injuries," the statement said.

A source familiar with the matter told the Los Angeles Times Woods suffered a shattered ankle, as well as two leg fractures. At a news briefing Tuesday evening, officials said Woods was conscious when emergency responders arrived at the crash scene and had non-life threatening injuries.

Officials also said there was "no evidence of impairment" at the scene. Authorities said they checked for any odor of alcohol or other signs he was under the influence of a substance and did not find any. They did not say how fast he was driving. Weather was not a factor in the crash.

The two-lane road he was on curves through upscale LA suburbs, and the northbound side that Woods was driving on descends steeply enough that signs warn trucks to use lower gears. The speed limit is 45 mph. 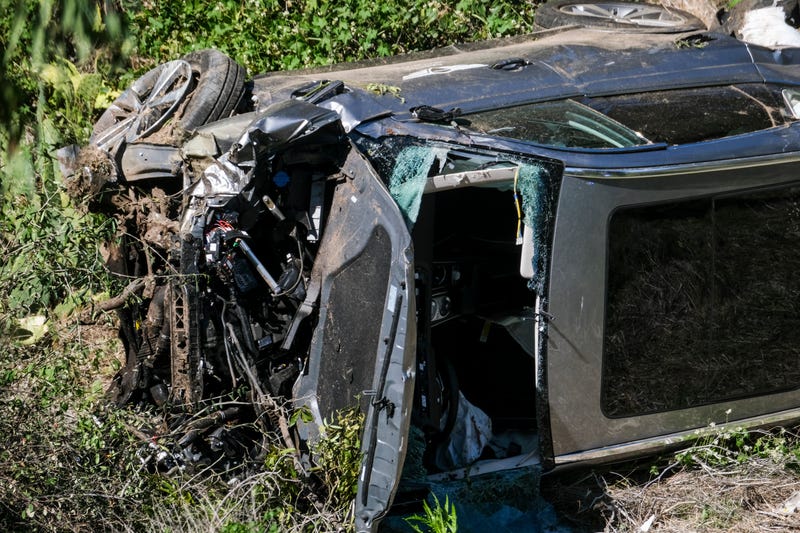 Woods was in Los Angeles over the weekend as the tournament host of the Genesis Invitational at Riviera, where he presented the trophy. He was to spend Monday and Tuesday filming with Discovery-owned GOLFTV, with whom he has an endorsement contract. One tweet on Monday showed him in a cart smiling with David Spade.

According to Golf Digest, also owned by Discovery, the TV shoot was on-course lessons to celebrities, such as Spade and Dwyane Wade. He did not play.

The 15-time major champion last played Dec. 20 in the PNC Championship with his 11-year-old son, Charlie. He had a fifth surgery on his back, a microdiscectomy, two days before Christmas and gave no indication when he would return. The Masters is April 8-11 and when asked if he would be there during the CBS telecast, Woods replied, “God, I hope so.”

This is the third time Woods has been involved in a car investigation. The most notorious was the early morning after Thanksgiving in 2009, when his SUV ran over a fire hydrant and hit a tree. That was the start of shocking revelations that he had been cheating on his wife with multiple women. Woods lost major corporate sponsorship, went to a rehabilitation clinic in Mississippi and did not return to golf for five months.

In May 2017, Florida police found him asleep behind the wheel of a car parked awkwardly on the side of the road. He was arrested on a DUI charge and said later he had an unexpected reaction to prescription medicine his back pain. Woods later pleaded guilty to reckless driving and checked into a clinic to get help with prescription medication and a sleep disorder.

We thank everyone for the overwhelming support and messages during this tough time.

As previously communicated, Tiger was involved in a single-car accident earlier this morning in California. He has undergone a long surgical procedure on his lower right leg and ankle after being brought to the hospital.

“Mr. Woods suffered significant orthopedic injuries to his right lower extremity that were treated during emergency surgery by Orthopedic trauma specialists of Harbor-UCLA Medical Center, a level 1 trauma center. Comminuted open fractures affecting both the upper and lower portions of the tibia and fibula bones were stabilized by inserting a rod into the tibia. Additional injuries to the bones of the foot and ankle were stabilized with a combination of screws and pins. Trauma to the muscle and soft-tissue of the leg required surgical release of the covering of the muscles to relieve pressure due to swelling.” - Anish Mahajan, MD, Chief Medical Officer & Interim CEO of Harbor-UCAL Medical Center.

He is currently awake, responsive, and recovering in his hospital room. Thank you to the wonderful doctors and hospital staff at Harbor UCLA Medical Center, the Los Angeles County Sheriff’s Department, and the Fire Department. Your support and assistance has been outstanding.

There are no further updates at this time and we continue to thank you for your well-wishes and privacy for him and his family. - TGR