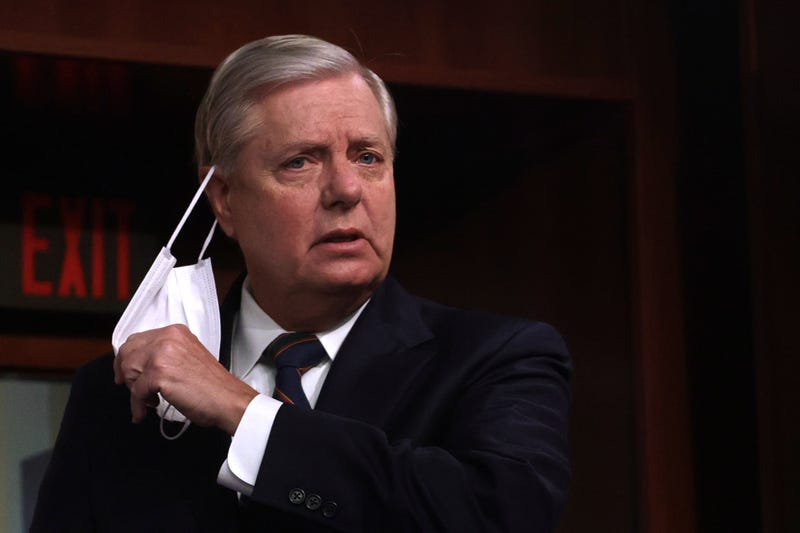 NEW YORK (1010 WINS) -- A mob of Trump supporters on Friday surrounded Sen. Lindsey Graham while he was seated at a gate at Washington's Reagan National Airport, shouting "traitor!" after he blamed the president for inciting the violence at the U.S. Capitol Wednesday.

A source sends this video of a group of Trump supporters today harassing Sen. Lindsey Graham at Reagan airport and loudly calling him a “traitor” after he publicly broke with Trump earlier this week. pic.twitter.com/XBF8K6DIUD

In video obtained by Politico's Daniel Lippman, people in the mob -- some wearing "I Love Trump" and "Q" T-shirts -- shout "you're a liar!" and "traitor!"

Graham sits quietly as several officers form a barrier between the Republican lawmaker and the mob.

Graham said Thursday that the president must accept his own role in the violence that occurred at the U.S. Capitol, adding that he didn’t regret helping Trump but that the whole matter had been a “self-inflicted wound.”

“When it comes to accountability the president needs to understand that his actions were the problem not the solution," Graham said.

Graham was referencing Trump’s comments at a rally on Wednesday where thousands of the president’s supporters gathered, and where he stoked displeasure at the impending Electoral College certification vote of Democrat Joe Biden’s victory over him in the 2020 election.

“If you don’t fight like hell, you’re not going to have a country anymore,” he said, encouraging attendees to walk down the street to the Capitol, where lawmakers had gathered for the session.