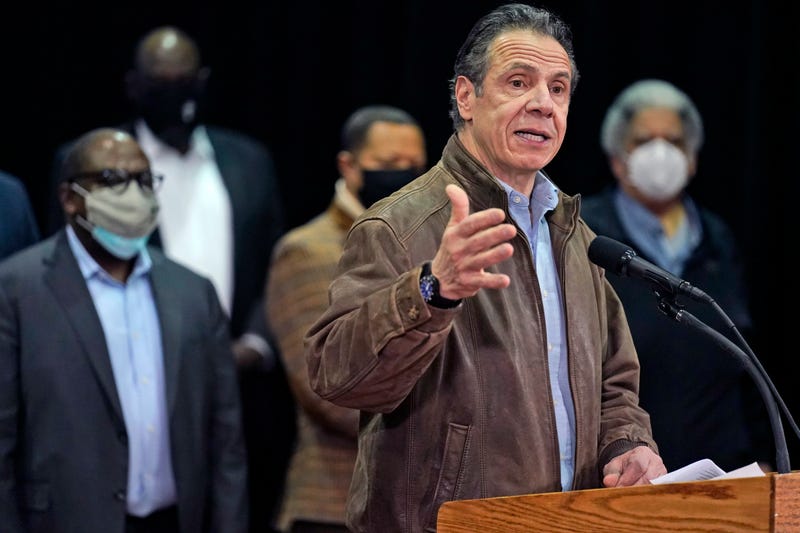 In this Wednesday, Feb. 24, 2021, file photo, New York Gov. Andrew Cuomo speaks during a press conference before the opening of a mass COVID-19 vaccination site in the Queens borough of New York. Photo credit AP Photo/Seth Wenig, Pool, File
By The Associated Press

NEW YORK (AP) -- A second former aide said she was sexually harassed by New York Gov. Andrew Cuomo, who responded with a statement Saturday saying he never made advances toward her and never intended to be inappropriate.

Charlotte Bennett, a health policy adviser in the Democratic governor's administration until November, told The New York Times Cuomo asked her inappropriate questions about her sex life, including whether she ever had sex with older men.

Another former aide, Lindsey Boylan, a former deputy secretary for economic development and special adviser to the governor, recently accused Cuomo of subjecting her to an unwanted kiss and inappropriate comments. Cuomo denied the allegations.

Cuomo said in a statement Saturday that Bennett was a “hardworking and valued member of our team during COVID” and that “she has every right to speak out.”

He said he had intended to be a mentor for Bennett, who is 25.

“I never made advances toward Ms. Bennett nor did I ever intend to act in any way that was inappropriate,” Cuomo's statement said. “The last thing I would ever have wanted was to make her feel any of the things that are being reported.” 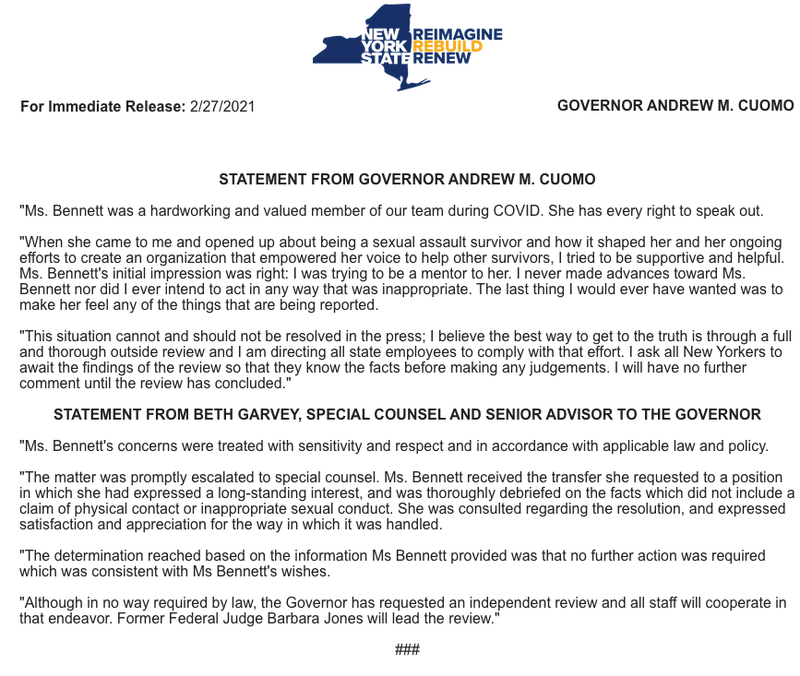 Cuomo, however, said he had authorized an outside review of Bennett's allegations.

The governor's special counsel, Beth Garvey, said that review would be conducted by a former federal judge, Barbara Jones.

“I ask all New Yorkers to await the findings of the review so that they know the facts before making any judgements,” Cuomo said. "I will have no further comment until the review has concluded.”

Amid mounting pressure from elected leaders, Garvey said Sunday that Cuomo’s office had asked Attorney General Letitia James and the Court of Appeals to “jointly select an independent and qualified lawyer in private practice without political affiliation to conduct a thorough review of the matter and issue a public report.”

“The work product will be solely controlled by that independent lawyer personally selected by the Attorney General and Chief Judge,” the governor’s office said in a statement. “All members of the Governor's office will cooperate fully.  We will have no further comment until the report is issued.” 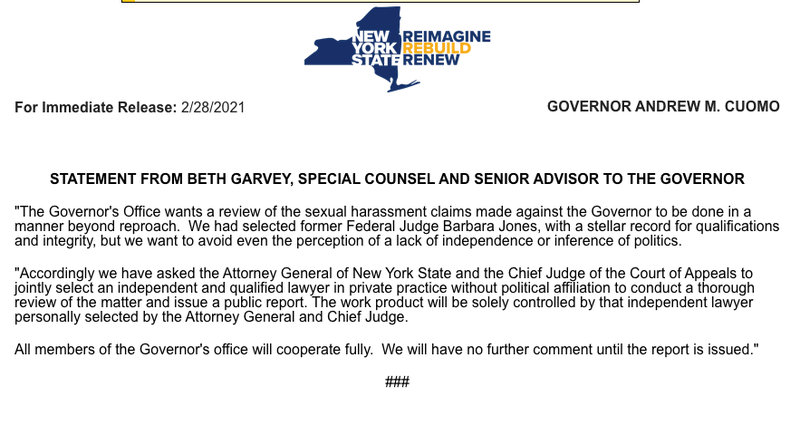 Some top New York Democrats had said any investigation should be placed out of the control of the governor’s office, including the selection of the investigator.

“The accused CANNOT appoint the investigator. PERIOD,” tweeted U.S. Rep. Kathleen Rice, a Long Island Democrat. “The continued allegations are deeply disturbing and concerning. The behavior described has no place in the workplace. A truly independent investigation must begin immediately.” 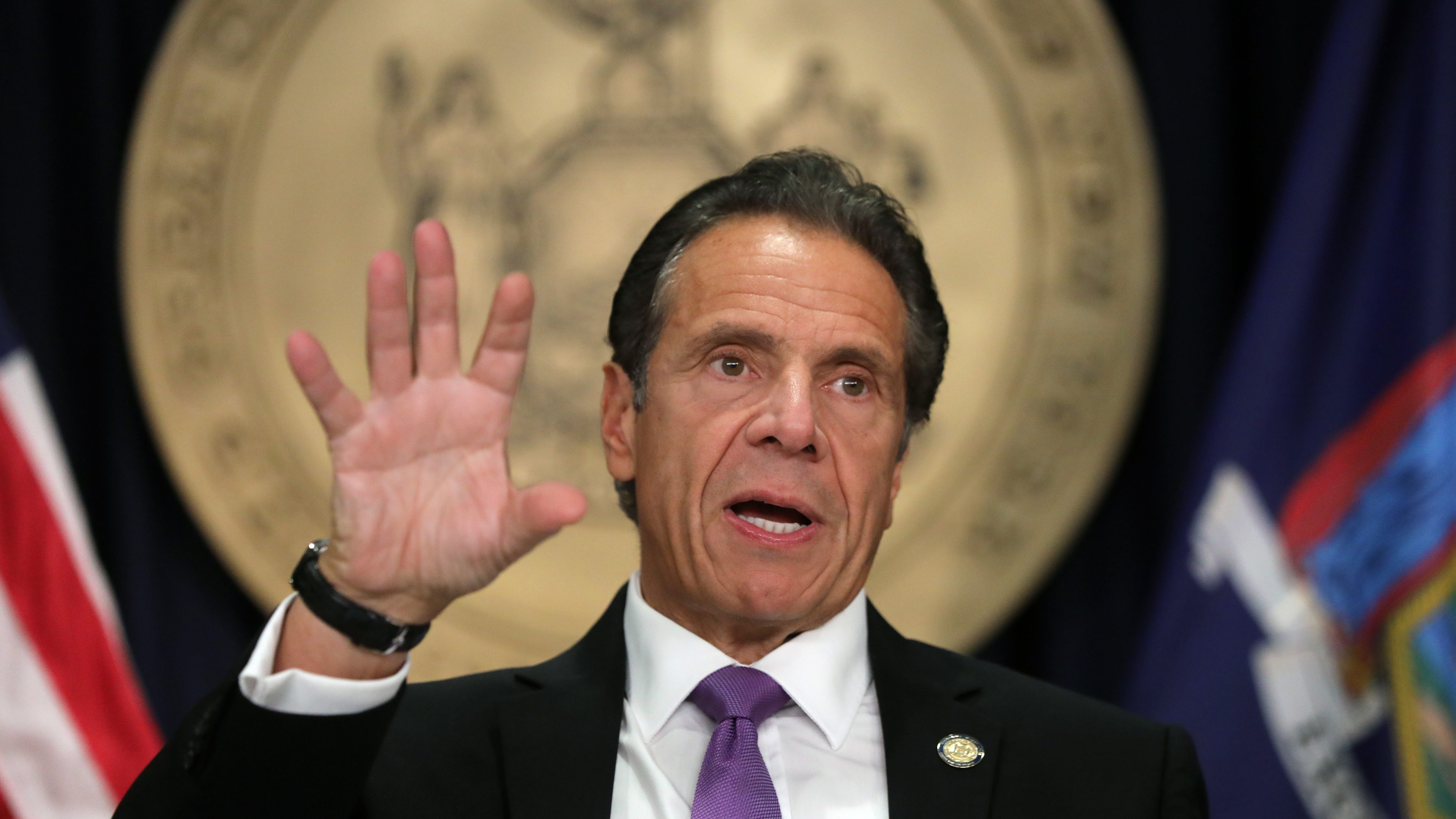 The pair of harassment allegations represent a deepening crisis for Cuomo, who just months ago was at the height of his popularity for his leadership during coronavirus pandemic.

In recent weeks, he has been assailed over revelations that his administration had underreported COVID-19 deaths in nursing homes. A state assemblyman went public with complaints that Cuomo had threatened to destroy him politically over statements he made in the press, prompting other politicians to share stories about having been bullied by the governor.

She told the Times her most disturbing interaction with Cuomo happened June 5 when she was alone with him in his Albany office. She said Cuomo started asking her about her personal life, her thoughts on romantic relationships, including whether age was a factor, and said he was open to relationships with women in their 20s.

Bennett said she also dodged a question from Cuomo about hugging by saying she missed hugging her parents. She said Cuomo never touched her.

“I understood that the governor wanted to sleep with me, and felt horribly uncomfortable and scared,” Bennett told the Times. “And was wondering how I was going to get out of it and assumed it was the end of my job.”

Bennett said Cuomo also told her he wanted a girlfriend, “preferably in the Albany area,” and he was lonely since breaking up with Sandra Lee, a chef and TV personality.

Bennett also said she tried to change the subject when Cuomo's comments were making her uncomfortable, telling him she was thinking of getting a tattoo. Cuomo, she told the Times, responded by suggesting she put the tattoo on her buttocks.

Bennett said she informed Cuomo's chief of staff, Jill DesRosiers, about the interaction less than a week later. She said she was transferred to another job on the opposite side of the Capitol. At the end of June she also gave a statement to a special counsel for Cuomo.

Garvey acknowledged that the complaint had been made and that Bennett had been transferred as a result to a position in which she had already been interested.

Garvey said in a statement that Bennett's allegations “did not include a claim of physical contact or inappropriate sexual conduct” and Bennett “was consulted regarding the resolution, and expressed satisfaction and appreciation for the way in which it was handled.”

“The determination reached based on the information Ms Bennett provided was that no further action was required which was consistent with Ms Bennett’s wishes,” Garvey said.

Bennett told the newspaper she decided not to push for any further action by the administration. She said she liked her new job and “wanted to move on.”

Jones, who would oversee the investigation, was appointed to the bench by President Bill Clinton, a Democrat, in 1995. As a judge, she struck down a portion of the Defense of Marriage Act denying federal recognition of same-sex marriage in a ruling later upheld by the U.S. Supreme Court.

After retiring, she joined the law firm Bracewell LLP, where her work focuses on corporate compliance and investigations.

Her arbitration work included a 2014 decision throwing out Ray Rice’s suspension by the NFL for punching his fiancé in an elevator in an attack recorded on video.

It remained uncertain whether lawmakers would accept her appointment.

Asked if Jones’ review is “truly independent,” Mike Murphy, a spokesman for Stewart-Cousins, a Democrat, said, “No it is not, and it should be done by the attorney general’s office.”

“The review suggested by someone handpicked by the Governor himself, is an outrageous, completely unacceptable idea. We need a truly independent investigation,” Ortt said in a statement.

Boylan said in Twitter postings Saturday night that she was proud of Bennett and alleged Cuomo “tried to destroy many, including me, in the press.”

“You are not going to derail or destroy any more lives,” she tweeted.