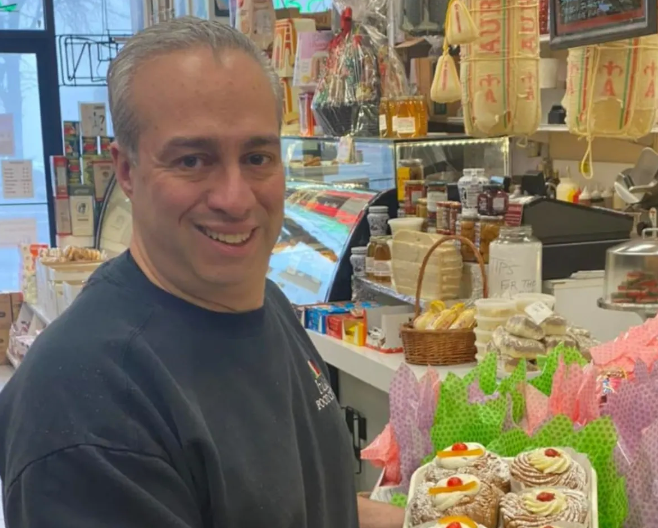 Anthony Apostolico, 48, was killed after a pickup truck he was riding in with his two children was hit by a falling tree in Rockland County on Father's Day. Photo credit Italian Food Center/Facebook
By Brian Brant

STONY POINT, N.Y. (1010 WINS) — A 48-year-old New York man was killed after a tree fell onto the pickup truck he was riding in with his two children on Father's Day.

According to state police, the Ford F-150 was heading northbound on the Palisades Interstate Parkway around mile marker 29.8 in Stony Point on Sunday afternoon when a large tree fell from the east shoulder and struck the pickup.

The force of the tree impact crushed the pickup on the east shoulder of the highway, turning it around, NBC 4 reports.

Anthony Apostolico had a large presence in Rockland County, owning the popular Italian Food Center and Deli in West Haverstraw, according to WABC 7.

"I don't have words to explain this," Armando Llivisupec told WABC 7. "He has been not just my boss, but my friend, my confidant, my brother, my family."

Officials described the incident as a "one-in-a-million accident," citing the tragic timing of the tree's sudden fall as the pickup truck passed by, according to NBC 4. Gusty winds were reported in the area at the time, but there was no rain.

An investigation into the crash is ongoing.