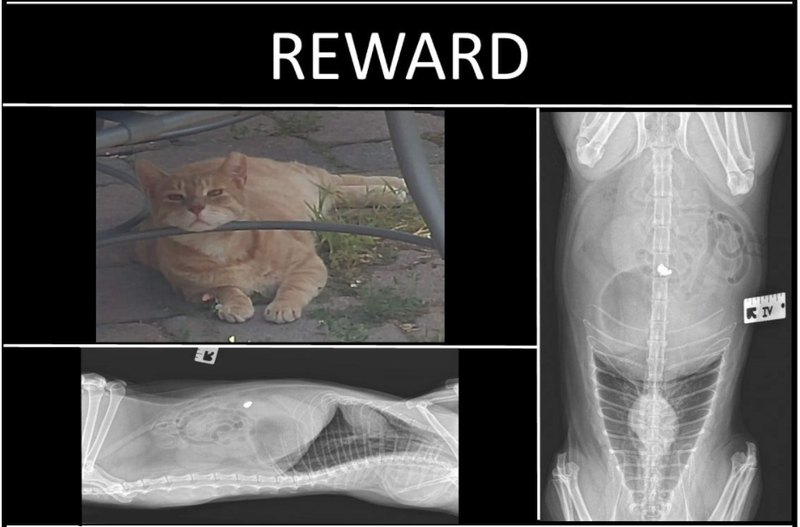 Sheldon was rushed to Newtown Veterinary Specialists in Newtown, Connecticut, where it was found that the cat was shot in its mouth through to the upper palate, which caused a fracture. Photo credit Putnam County SPCA
By 1010 WINS Newsroom

LAKE CARMEL, N.Y. (1010 WINS) -- Officials are trying to track down the person responsible for shooting a cat in Putnam County, leaving it with injuries that led to its death, according SPCA officials.

On Sept. 12 at about noon, the owner of Sheldon, a 5-year-old orange tabby cat, observed him near their Lake Carmel home appearing normal, according to SPCA officials.

About two hours later, the cat’s owner went outside, and told officials he saw Sheldon with blood on its face and appeared to be in distress.

Sheldon was rushed to Newtown Veterinary Specialists in Newtown, Connecticut, where it was found that the cat was shot in its mouth through to the upper palate, which caused a fracture.

Update: The reward is now up to to $1000 Please contact the Putnam County SPCA with any information regarding this...

Fragmented pieces of metal were found throughout the cat’s skull, according to the SPCA. After fragmenting, a larger part of the bullet continued through the cat’s upper palate and into the soft tissue of its throat, and found a way into Sheldon’s stomach.

Sheldon was under emergency vet care for three days before being released — but its condition worsened and was rushed back to the Newtown facility, where the cat died on Sept. 17.

A $1,000 reward is being offered by anonymous donors for information leading to the arrest and conviction of the person or people responding for the shooting.

“The fact that a group of separate anonymous donors have come forward on their own, shows the public outrage towards a crime like this,” said Putnam SPCA Chief Ken Ross.

Officials said due to the bullet’s fragmentation, identifying the type of bullet used will be difficult.