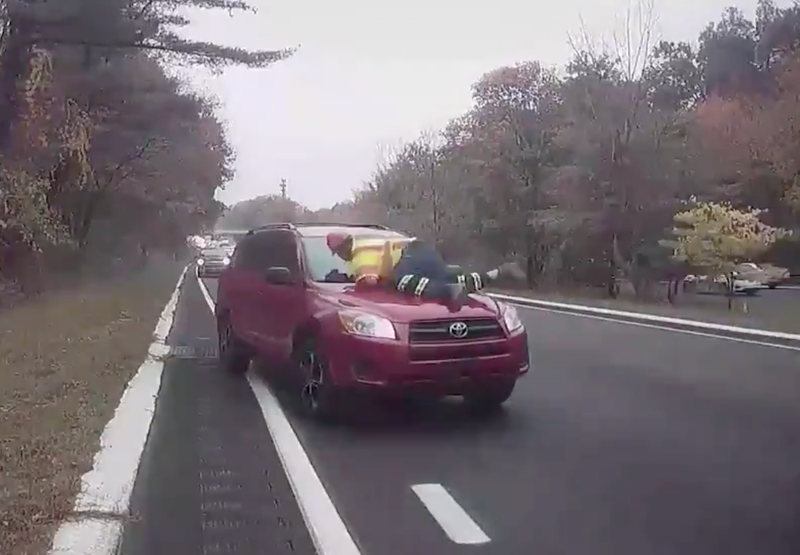 NEW YORK (1010 WINS) -- The state Department of Transportation on Monday posted a dramatic video of an SUV driver crashes into a state highway worker then continues to drive with the worker still on the hood.

We see reprehensible behavior on our roads every day. Watch from 4 camera angles as our #HELP operator is intentionally hit while directing traffic at a crash scene.

He was there to ensure safety for motorists. Ensure his safety by slowing down, paying attention & being patient. pic.twitter.com/cLi7GNqklE

The incident occurred on Palisades Parkway in Hudson Valley last Thursday as the Highway Emergency Local Patrol worker was directing traffic at the scene of a crash.

The employee is seen approaching two cars in front of a long line of traffic and motions for them to stop. He then bumps, a red Toyota SUV attempting to inch forward.

The driver tries to move around the worker but crashes into him. The worker then jumps stomach-first onto the hood of the car as the vehicle begins to speed down the highway.

Moments later, another motorist parked off the side of the highway is seen running into traffic to flag the car down, and the driver stops.

The employee is then seen limping to the side of the road before falling to the ground.

"The HELP truck driver was obviously shaken up and suffered non-life threatening injuries," spokesman Joseph Morrissey said. "The case is under investigation by the New York State Police."