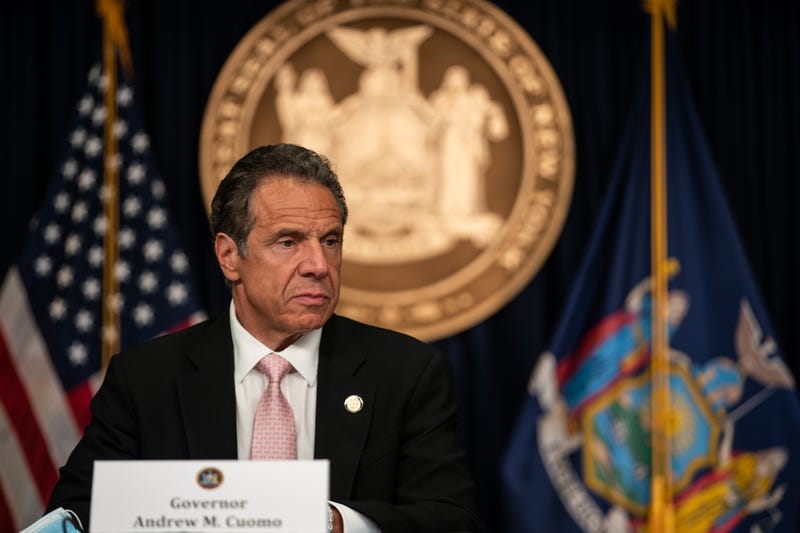 New York Gov. Andrew Cuomo speaks during the daily media briefing at the Office of the Governor of the State of New York on June 12, 2020 in New York City. Photo credit Jeenah Moon/Getty Images
By 1010 WINS Newsroom

NEW YORK (1010 WINS) -- A third woman has come forward to accuse Gov. Andrew Cuomo of harassment, claiming he made an unwanted advance toward her at a wedding reception.

A third woman has accused Governor Cuomo of unwanted touching and sexual attention, saying he placed his hands on her face and asked if he could kiss her at her friend's wedding. A friend took a series of pictures of the incident as it occurred. https://t.co/bgvzBK4vK0 pic.twitter.com/hXvgTvSntQ

Anna Ruch, now 33, met Cuomo at a wedding reception in New York City in September 2019 after he gave a toast, she said in an interview with the New York Times published Monday evening.

At some point during their interaction, Cuomo “put his hand on Ms. Ruch’s bare lower back,” the outlet reported.

“I promptly removed his hand with my hand, which I would have thought was a clear enough indicator that I was not wanting him to touch me,” she told the outlet. After Ruch removed his hands, the governor said she was “aggressive” and put his hands on her face, she said.

A cell phone photo obtained by the Times shows Cuomo placing his hands on Ruch’s face.

“He said, ‘Can I kiss you?” Ruch said in the interview. “I felt so uncomfortable and embarrassed when really he is the one who should have been embarrassed.”

A spokesman for Cuomo “did not directly address Ms. Ruch’s account, referring to a general statement that Mr. Cuomo released on Sunday night in which he acknowledged that some things he has said ‘have been misinterpreted as an unwanted flirtation,’” the Times reported.

The Times published its interview with Ruch hours after Charlotte Bennett, a former aide to Cuomo who also accused him of harassment, released a statement claiming he had "refused to acknowledge or take responsibility for his predatory behavior."

“As we know, abusers — particularly those with tremendous amounts of power — are often repeat offenders who engage in manipulative tactics to diminish allegations, blame victims, deny wrongdoing and escape consequences,” Bennett said in her statement.

“It took the governor 24 hours and significant backlash to allow for a truly independent investigation,” she added. “These are not the actions of someone who simply feels misunderstood; they are the actions of an individual who wields his power to avoid justice.”

In an interview with the Times, Bennett claimed the governor made comments to her that indicated he “wanted to sleep with [her],” adding that she felt “horribly uncomfortable and scared.”

Another former aide, Lindsey Boylan, has accused Cuomo of sexually harassing her and kissing her without her consent.

New York Attorney General Letitia James on Monday confirmed her office will be investigating the allegations. Cuomo on Sunday said he supported the investigation.