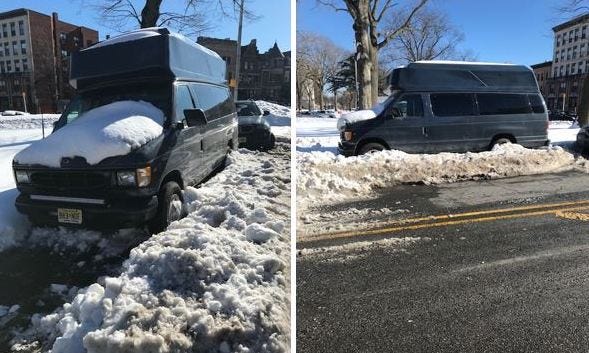 NEWARK (1010 WINS) – A 77-year-old woman was rescued Thursday after spending at least a day trapped in a van in Newark after this week’s snowstorm, officials said.

The woman, who lives in the van, initially called police around 3:30 p.m. Wednesday, telling them she was unable to leave her van because it was stuck in the snow.

However, an emergency operator mistakenly logged the wrong address, officials said. The woman had said she was at 67 Lincoln Park, but 67 Lincoln Street was logged.

When police arrived at the latter address, they were unable to locate the navy-blue minivan. They called the woman back, but she didn’t answer.

The woman called Newark firefighters at 9:30 a.m. Thursday and they quickly responded and located the woman, according to officials.

Firefighters were able to shovel a path to the van’s driver-side door and free the woman from the vehicle.

The woman refused medical attention and an offer to shovel out her vehicle, officials said.

“We regret that human error played a role in delaying our response to the correct address, although we attempted to call her for a correction,” Mayor Ras Baraka said in a press release. “I’m grateful that she reached out again today and that this incident didn’t end tragically.”

Officials said the Newark Office of Homeless Services is working to offer assistance to the woman.