Best known as the frontman for the beloved, multiple GRAMMY-winning band Hootie & the Blowfish just as much as his own impressive solo Country music career -- singer, songwriter, sports nut, and all-around kind soul Darius Rucker joined RADIO.COM’s Rob + Holly for a special Check-In.

Just this week, Darius claimed his 10th number one as a solo Country artist with his 2020 single "Beers and Sunshine" continuing to make its way onto playlists and into the hearts of millions. Admitting the idea for the song came about while imbibing at odd times, as many could relate with the past year taken into consideration, Rucker also confessed it was wine he was sipping at the time.

“It was one of those songs that just wrote itself,” Darius says. “Once we started it, and once we got that ‘the only BS I need’ line, everything else just came.” Remembering back to the time when the track was penned, he and his partners wrote the up-beat single because “we were all so confused. It had only been a couple of months into the pandemic,” he explains, “and we were waiting for it to end at any minute.”

When normal life fell apart in March of 2020, Rucker was on tour in Europe performing at the Country Music Festival. After returning home he, as we all did, assumed this would be over sooner rather than later. “If you would have told me in 2019 that 2020 was gonna happen, I would have never believed you,” he tells Rob + Holly.

Rucker’s 2013 hit “Wagon Wheel,” for which he brought home the GRAMMY for Best Country Solo Performance at the 56th annual awards ceremony, some may be unaware was co-written by "The Bard," Bob Dylan. Darius explained how Dylan had written just the chorus for a film project in the ‘70s, which was eventually featured on an outtakes compilation. After a 17-year-old Ketch Secor of Old Crow Medicine Show got his hands on it to officially finish it, Darius would prod him warmly saying, “only a 17-year-old kid” would attempt to finish a Dylan song. Secor “wrote the verses,” he says smiling. “It was big for them, and it was really big for me.”

“I heard it when I was a lot younger… when it first came out. It was such a big song of the South around frats, and clubs,” Darius says, “that I knew the song for years before I ever thought about cutting it.”

The way a song from so many years ago can be given a new life is a testament to the goal of all songwriters – to have a timeless impact on their craft. “Anytime you write a song, you want it to be that song that you believe a hundred years from now people will still be listening to,” Rucker says. Rob, Holly, and Darius all agree that “Wagon Wheel” is certainly one of those milestone moments. “That one might make the Library of Congress, I don’t know,” he laughed.

There are, arguably, a few more of Rucker’s singles from his Hootie & the Blowfish days that could be considered for such high praise, if not for the lesser Rock & Roll Hall of Fame which is still to offer the iconic group a nomination. The snub is not lost on the singer, who was shocked they were skipped again last year amid their 25th anniversary. A CNN documentary about ‘90s music also struck a nerve with him, after seeing one hit wonders receive tributes while he and his Blowfish were left flopping on the deck. “They talked about Chumbawumba, and didn’t mention Hootie & the Blowfish,” he laughed. “It was funny for me because, the [CNN] producers were Gary Goetzman and Tom Hanks. So, I came out and said, you know, ‘blank Tom Hanks.’ And I love him, I’m such a big fan. I didn’t mean it, I was joking.” When asked how he could say that about Hanks, he would say “well if I said ‘blank Gary Goetzman’ no one’s gonna know who I’m talking about.”

Last summer, during the CMT Celebrates Our Heroes broadcast, Darius performed Randy Travis’ song “Forever and Ever Amen” as a way to say a special thank you to all of the hardworking healthcare workers putting their lives on the line through this pandemic.

Keeping them in his thoughts throughout the crisis, he once again tipped his hat and heart to “all the first responders, police officers, and everybody who’s out there. The paramedics, the nurses, the doctors… the teachers, the people working at Walmart… grocery stores. These people that are essential workers, to all of them I just want to send my love and say thank you for keeping us all going through all of this.”

Looking to pick the brain of a music lover through-and-through, Rob + Holly wondered if given the chance to step into a time machine, who Darius would choose to travel back to see perform in person. Realizing he’s got his work cut out here, he admitted to a “big tie” between 1970’s Bob Marley (whose song “War” he performed impeccably in 1999, above), The Beatles in 1960, and Frank Sinatra in 1964 live at The Sands. Very specific… you can tell he’s thought about this before.

While on the topic of science fiction, asked who he would choose to be if offered an opportunity to switch with them for a day, Darius said, “well, I like me,” coyly before admitting “well, it would definitely be a woman. So, I would probably be Condoleeza Rice…or Vice President Harris. Some really powerful woman, and just see what that is like.” 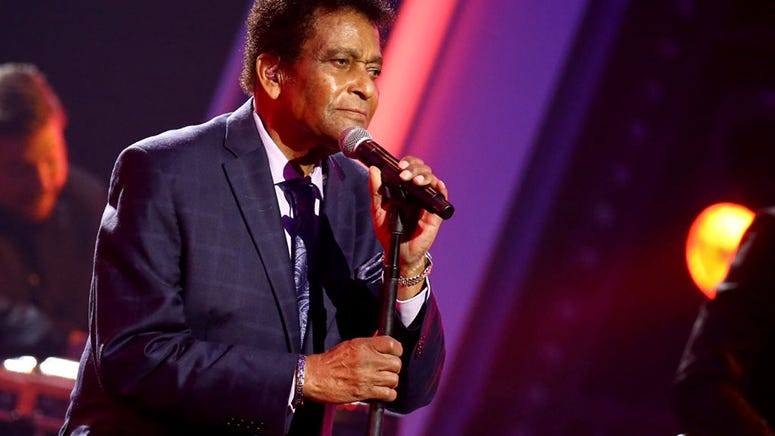 The Year in Country: The times, they are a-changin'

With Black History Month celebrations at the forefront of everyone’s minds this month, Darius gave us a look into his favorite Black musicians to grace the stage and studios of Country music throughout the years.

Easily naming singers like “Country Girl” Rissi Palmer, the late Charley Pride, and Trini Triggs, Rucker remembered the time when he began to make waves in the genre. “For me that was a shock,” he says, “when I started making hits and they were like, ‘no one’s had a hit since Charley Pride.’ I thought Trini Triggs or Rissi or somebody would have had a hit, at least a top 5 hit. I think of De Ford Bailey, a member of the Opry back in the day when I’m sure it was tough but he was out there doing it.”

“Charley is the guy you think of because he was such a pioneer,” he says. “None of us would be sitting here getting to make the music we’re making if Charley hadn’t sacrificed ,and done the things he did, and made the great music he did.”

Newcomer to the genre Jimmie Allen feted Rucker last year, saying that his efforts “made it possible for a guy that didn’t fit in a lot of places, because people that looked like me weren’t into what I was into,” causing both men to choke back the tears. For Darius, “Al Green was my first musical influence,” he says. “But then I started growing up and Charley was big. Even when I got older, Lenny Kravitz. When Lenny Kravitz came on the scene I was like, ‘man, I could do that! He’s doing it.’ Guys like that, you know.”