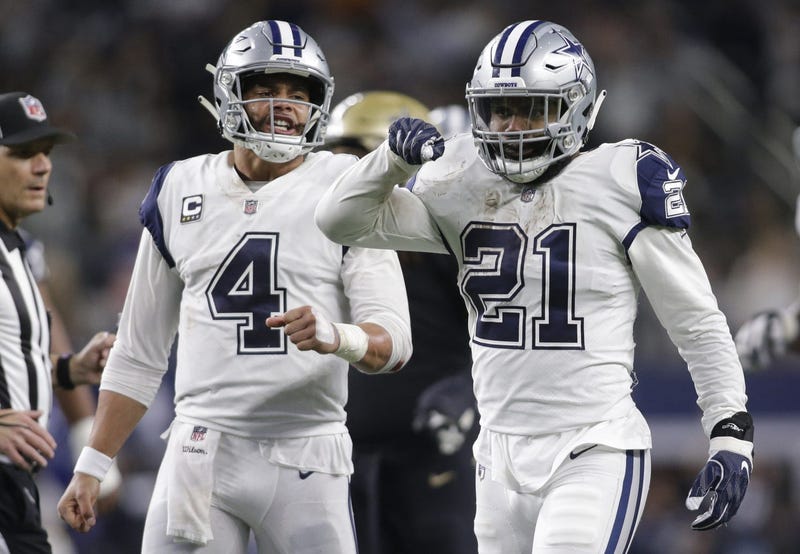 DALLAS (105.3 The Fan) - If it were up to Jerry Jones, the Cowboys would extend quarterback Dak Prescott, running back Ezekiel Elliott, defensive end DeMarcus Lawrence, cornerback Byron Jones, and players that are out of a contract this offseason. But that's not the reality and he knows it.

Prescott will enter the final year of his rookie deal in 2019 and Elliott can re-negotiate his contract after his now-completed third season in the NFL.

When discussing Elliott’s future and whether he’d be a Cowboy for the “foreseeable future,” Jones said, "Do we want Zeke in the foreseeable future on the Dallas Cowboys? The answer is yes. That’d be madness to think any differently."

"You asked a question about Dak and the answer is yes. I want him in the short term and in the long term."

Jones then went on add more about Elliott, saying, "that's like asking if you want (Zack) Martin, or (Tyron) Smith. "Now, getting there ... Hell, I want a bigger boat," Jones joked about his new 357-foot yacht.

"The question is. Do you have the resources or do you have a plan to get there? That's the real question ... tell us how you're going to do it," Jones said. "Sometimes you don't know how to do it until you sit there and reach that hand out and shake it."

As he was giving his long-winded answer, Jones added the names of DeMarcus Lawrence and Bryon Jones as players they wanted to keep. He didn't mention wide receiver Amari Cooper by name, but the team has made it clear they plan to extend him as he enters the final year of his contract next season.

According to 105.3 The Fan's Mike Fisher, Dallas has approximately $51 million in cap room this spring and could "plot a way to lure free agent safety Earl Thomas away from the Seattle Seahawks," despite COO Stephen Jones telling 105.3 The Fan Monday that he didn't expect them to be in the market for a 'high-profile free agent.'