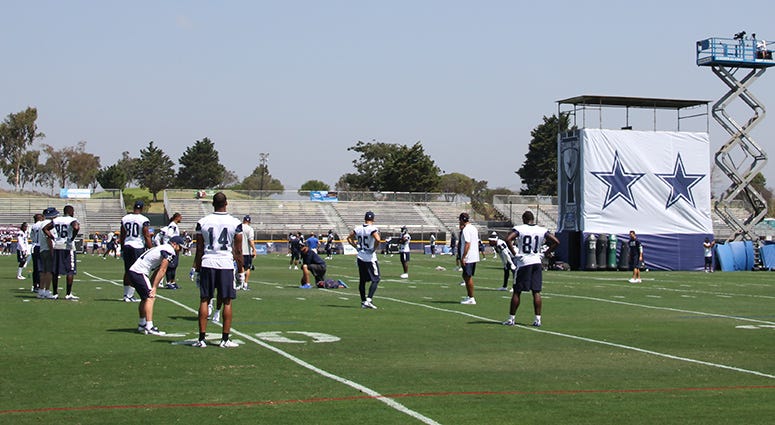 FRISCO (105.3 THE FAN) - In addition to the Dallas Cowboys plan to place defensive lineman DeMarcus Lawrence and cornerback Byron Jones on the PUP list to open training camp in Oxnard, sources tell me that Dallas will also start camp with defensive lineman Tyrone Crawford and receiver Noah Brown on PUP.

There are no gigantic surprises here; Crawford and Brown, rehabbing from offseason issues, figure to be short-termers on the physically unable to perform list. Crawford, a team captain, should be fine to re-assume his role as a versatile first-teamer for the Cowboys. And Brown, the big-bodied young receiver, may have a clearer path to a roster spot with the recent release of veteran Allen Hurns.

The shuffle will continue, of course; sources suggest to me that depending on how Hurns' visits elsewhere go, he might be welcome to a return engagement with the Cowboys.

Meanwhile, while the Cowboys are optimistic about Byron Jones (his hip surgery rehab has him already doing a great deal of work inside The Star), the Lawrence situation is all about being available for Week 1 of the regular season.

Lawrence, who signed a massive five-year, $105 million contract extension with Dallas earlier this offseason, underwent surgery to repair a torn labrum in April while vowing to be ready when the football bullets fly.

Jones underwent hip surgery in March, and might be ready sooner than that -- though there is little reason for Byron or Tank to bother with much preseason participation.

Crawford also won't need much work, but Brown is obviously in a different category -- the sooner off PUP the better for him.

Dallas plays host to the New York Giants in the season opener on Sept. 8, and that's when the Cowboys want to unleash Lawrence (coming off of a 2018 campaign in which he played all 16 games and racked up 64 tackles, 10.5 sacks and a second straight Pro Bowl appearance) and Jones (who also appeared in all 16 contests, finishing with 67 tackles, and 14 passes defended, making his first Pro Bowl as a result).