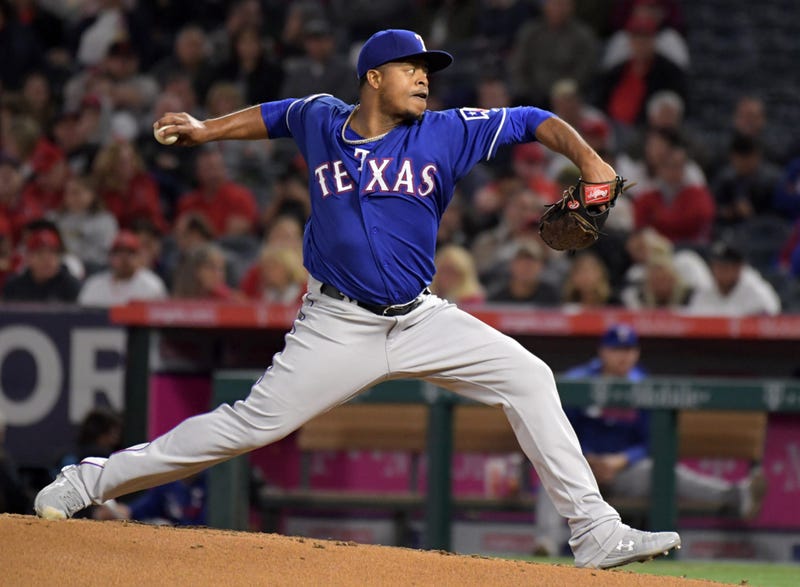 DALLAS (105.3 The Fan) - The Rangers are just ten games into the 2019 season, but are already finding themselves short on starting pitching.

Rangers president and general manager, Jon Daniels, revealed on 105.3 The Fan Monday that they were looking to add some starting pitching depth after the club lost Edinson Volquez to a potential season-ending elbow injury.

Adrian Sampson will assume Volquez's spot in the rotation until the club can determine the severity of his injury.

In addition to losing Volquez, the Rangers lost Yohander Mendez (elbow) and Luke Farrell (jaw) to injuries, and Jason Hammel made a decision to retire despite making the team out of spring training, leaving them without much big league experience to turn to.

The Rangers elected to build their 2019 rotation with three pitchers who were coming off of Tommy John surgery in what they hoped would be a bridge year while they awaited the arrival of the first wave of their young pitching arms. Taylor Hearn is one of those young arms, but he's not quite ready to join the big-league club. Another pitcher who could be called upon from Triple-A Nashville is Ariel Jurado, but he had a nearly a 6.00 ERA in 12 big-league appearances last season (8 starts).

There is a big-name free agent that remains unsigned on the open market but don't look for Texas to sign Dallas Keuchel. Should the Rangers sign the former Houston Astros left-hander, they'd have to send the Astros a first-round pick as compensation because he turned down their $17.9 million qualifying offer in the offseason, and that's not something the Rangers want to do.

"I think we'd consider anything. We have been looking for more depth in general. Whether that's small trades or even some of the other free agents that are still out there," Daniels said before mentioning the losses of Mendez, Farrell, and Hammel. "We kind of lost that layer of depth, and while none of them were true aces, that level of depth to get through a season to protect our young guys is important. So that's where our focus has been to try and replace that.

"As far as Keuchel, one of the unusual circumstances with us there is we traded Alex Claudio for a first-round draft pick. And the way the rules work ... if we were to sign a guy that got a qualifying offer, we'd have to give up that draft pick. So, it's a little bit of an added factor that we're hesitant on."

Some of the other veteran free agent starting pitchers available on the open market that wouldn't cost the Rangers a draft pick should they sign them include: Miguel Gonzalez, James Shields, Yovani Gallardo, Edwin Jackson and Bartolo Colon.