DALLAS (105.3 The Fan) - The Dallas Cowboys' 25-10 domination of the Washington Commanders didn't come without a cost, but the team didn't know the price until Monday.

The good news is... it didn't cost them as much as they might have initially feared, as wide receiver Noah Brown, defensive tackle Quinton Bohanna, defensive end Micah Parsons and right guard Zack Martin all avoided serious injuries.

Brown (neck) and Bohanna (shoulder) exited the game in the fourth quarter and never returned, but it sounds like they have a chance to play in Week 5 against the Los Angeles Rams.

"I think both those guys are scheduled to potentially practice this week. I got a good report on both Noah [Brown] and [Quinton] Bohanna," head coach Mike McCarthy said at his media availability on Monday.

As for Martin, who missed a couple plays while dealing with an ankle injury, McCarthy said he expects his All-Pro right guard to be ready to go at practice on Wednesday.

Parsons was another player whose status was in question coming out of the game, as he was observed grabbing his lower back in the fourth quarter and missed a couple of plays before returning. When speaking with reporters after the game, Parsons said he wasn't concerned about it.

“Nah, I feel like I just played four quarters of football. It comes with the game,” Parsons said to reporters, including 105.3 The Fan's Bobby Belt. “It’s just football.”

The one player's progress to keep an eye on this week is cornerback Jourdan Lewis, who injured his groin in pregame warmups. He was initially listed as being questionable to return before being downgraded to out before the game kicked off, according to DallasCowboys.com. Lewis missed time in training camp with a hamstring injury but was able to play in the season opener.

Dallas turned to 2022 fifth-round pick DaRon Bland in his absence on Sunday, and the rookie made an impact when he intercepted Commanders quarterback Carson Wentz late in the fourth quarter to help seal the win. 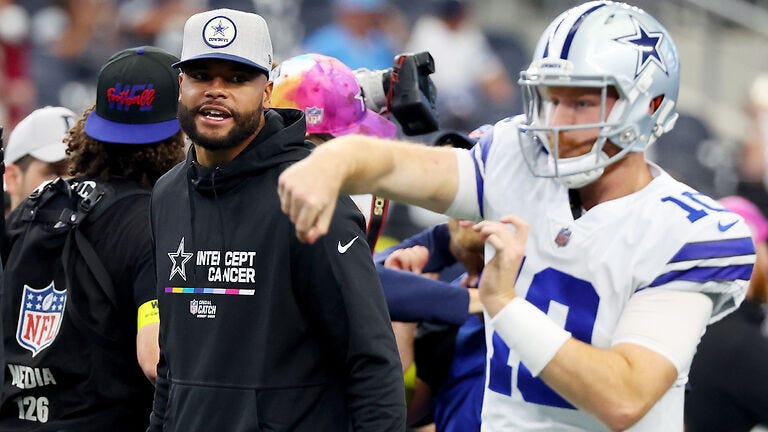