DALLAS (105.3 The Fan) - The Odell Beckham Jr. recruiting visit to North Texas continued at the American Airlines Center on Monday night while Luka Doncic's Mavericks took on Devin Booker and the Phoenix Suns.

Joined by Cowboys linebacker Micah Parsons and cornerback Trevon Diggs, Beckham was met by a scrum of reporters when he arrived at the arena.

When asked how his visit was going so far, Beckham said, "everything is nice," but "plead the fifth" on most of the other questions he received, including one about if he had met with Cowboys owner Jerry Jones.

He did compliment Diggs and Parsons, his hosts for the evening.

"He's (Diggs) a superstar, look at these two. This is the dynamic duo. (I) just came to the game, man, Devin Booker is my brother came to show love," he said via Calvin Watkins of the Dallas Morning News.

Beckham then proceeded to go to his seat, which was located next to the Suns bench.

At one point later in the game, Tim MacMahon of ESPN caught up with Beckham and asked the receiver how likely it was that the Cowboys sign him, to which he responded by saying, "It's a good possibility."

But the night was still young...

While two of the Cowboys' biggest stars were doing their part by treating Beckham to a great night at the game (Luka did his part, too), the fans got an opportunity to put on the full-court press when the receiver was shown on the jumbotron during the third quarter.

The free-agent receiver was at the team's headquarters at The Star on Monday to go through testing with the Cowboys medical staff, coach Mike McCarthy said during his press conference.

The recruiting visit will culminate with Beckham meeting with Cowboys quarterback Dak Prescott and the team's leadership council, as well as owner Jerry Jones and EVP Stephen Jones, at The Star on Tuesday. 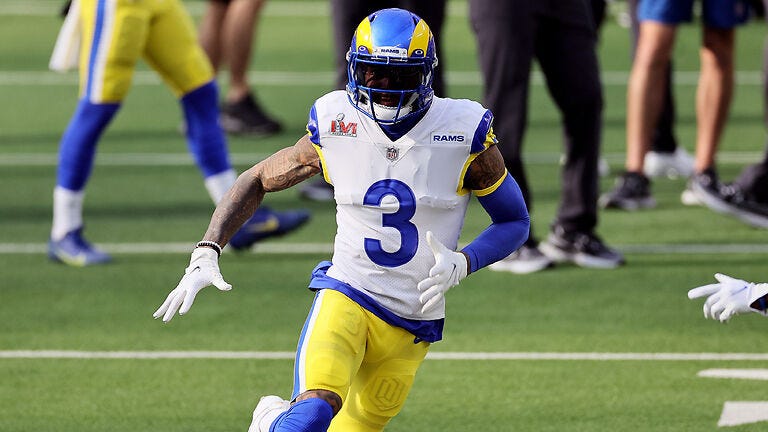