DALLAS (105.3 The Fan) - The Dallas Mavericks made a major shakeup in their front office last week in an effort to get more attractive free agents to put around All-Star guard Luka Doncic.

Mavs owner Mark Cuban brought in Nike executive Nico Harrison to be their next president of basketball operations and general manager. Harrison is known around the NBA as a guy who has built a lot of strong relationships with players, especially ones who are represented by Nike.

But do the Mavs have another unexpected hurdle to clear in order to get other star players here? According to ESPN's Brian Windhorst, they might have a problem getting players to sign up to play with Doncic.

"I don't know how many people are going to be excited to play with Luka (Doncic). I think Luka is, maybe, a difficult person, Windhorst said Monday on Shan and RJ. "He's a great player but when you watch the Mavericks play, he's barking at the coach, he's barking at his teammates, he's barking at the officials. He's always barking about something. He can really be an irritable guy.

"So, with a guy who has options, I will be interested to see how that goes going forward. … What is he, 21 now (he's 22)? I don't even believe he's 21. If you look at him, everything about him, he doesn't look 21, he doesn't play 21. It's almost scary to think where this guy's going to be when he hits his prime. … I do think that Luka isn't a guy... let's just say It's not like going to play alongside LeBron (James) or Kevin Durant, guys who you can tell really form good bonds with teammates. I think he's going to be a challenging guy to play with sometimes, but if you win, that's going to be the only thing that matters."

Windhorst wouldn't likely just throw such a comment like that out there if he hadn't heard it from multiple people around the league. However, the idea that Doncic is more difficult to play with than LeBron or Durant might be an unfair criticism.

We've certainly seen an emotional Doncic on the floor on several occasions, almost every night. He's 22 and has some growing to do, as he's acknowledged. He and Kristaps Porzingis don't appear to be best friends, and Rick Carlisle appears to have left the organization after 13 years in part because the two didn't get along.

That said, Carlisle's personality isn't for everyone, and the reason KP and Luka don't get along is more to do with Porzingis being an outsider on the team than it is Doncic's doing.

Either way, the excuses for the Mavs failing to land a big fish in free agency must end.

Dallas has a new coach in tow with Jason Kidd, a young star in Doncic, to go along with a new brain trust that includes Harrison, Michael Finley, Dirk Nowitzki, and Cuban.

So we'll soon find out where the chips fall. 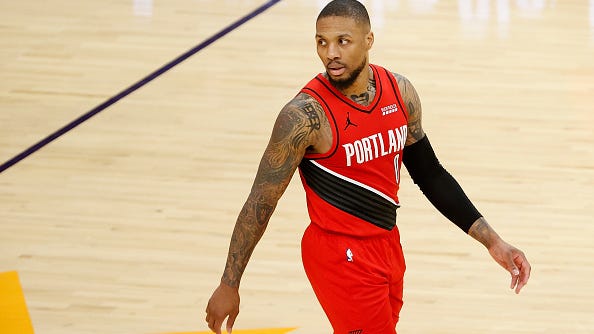 Damian Lillard could want out of Portland after Blazers' head coaching search: report