For the second consecutive year, the Atlanta Braves struck gold on a veteran position player in free agency.

After former American League MVP Josh Donaldson had a bounce-back year on a one-year deal with the team in 2019, he departed in free agency to sign a four-year/$92 million with the Minnesota Twins.

The loss of Donaldson, amazingly, didn't ultimately affect the Braves. While he had an underwhelming first season with the Twins, the Braves got a massive bounce-back season from Marcell Ozuna, who they inked to a one-year/$18 million deal after a disappointing final season with the St. Louis Cardinals.

In the pandemic-shortened season, Ozuna played all 60 regular season games, slashing .338/.431/.636 with 18 home runs, 56 RBIs and a 1.067 OPS. In what was meant to be a prove-it season for Ozuna, he more than enhanced his value, leading the sport in home runs, RBIs and total bases.

A few things are key to remember as Ozuna hits free agency.

First of all, while Braves' general manager Alex Anthopoulos has been open about a desire to retain Ozuna, what's to say that the Braves won't allow him to leave and sign a multi-year deal elsewhere, while pivoting to another playing coming off of a down season? As owners pinch pennies across the sport, there will be more players non-tendered and fewer players given multi-year deals this winter. It's possible that while the Braves would like to keep Ozuna, their best strategy moving forward could be to surround Freddie Freeman, Ronald Acuña Jr. and Ozzie Albies with players looking to rebuild their value, something that's worked for them over the past two years.

Then again, the Braves tried to add to their starting rotation this past offseason by signing former World Series MVP Cole Hamels to a one-year/$18 million deal. Hamels made just one start for the team because of injuries. So while the team has hit on Donaldson and Ozuna, there isn't a 100% success rate on trying to get the most out of players coming off of disappointing and/or injury-riddled seasons.

The second thing to factor in when considering Ozuna's future is that we don't know whether the DH will return in the National League in 2021. It seems hard to imagine that the DH would be universal in 2020 and pitchers would return to hitting in 2021, but the MLB and MLBPA still need to negotiate on the future of the rule in the senior circuit. While it would seem to be unfair to not give National League teams an answer on the universality of the DH at the outset of free agency, there's no indication that we'll have an answer on this question anytime soon.

Ozuna can play left field, but is probably best-geared to be a DH. Certainly, if we're talking about a three or four-year pact, National League teams would like to know if Ozuna DHing in the final years of his deal will be a possibility. Not having an answer to that question could make some teams that would otherwise be interested in committing to Ozuna second guess themselves.

Just days before his 30th birthday, let's take a look at the five most likely landing spots for Ozuna this offseason: 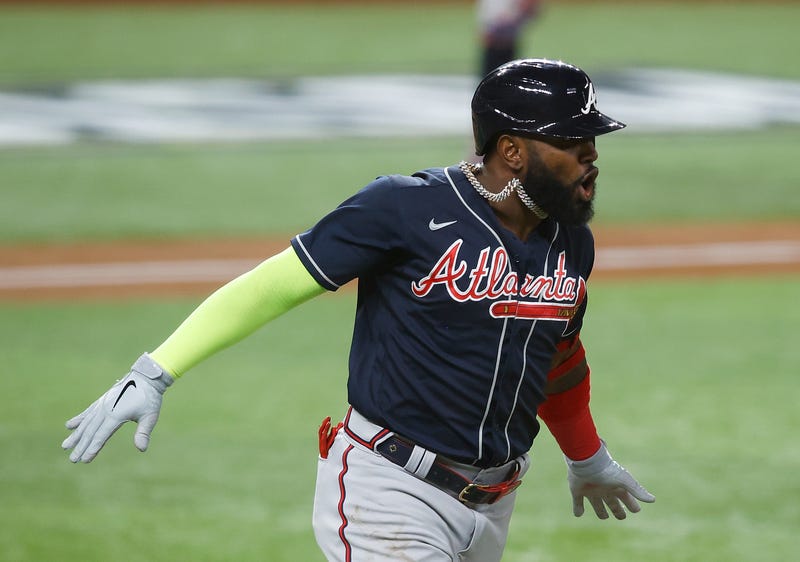 After coming of age perhaps a year earlier than some expected, the White Sox feel like a team primed to make a major addition this offseason. We've already suggested they could be a fit for Trevor Bauer or George Springer, though it's hard to know if they're the most likely landing spot for either. With Eloy Jiménez in left field, the White Sox would probably prefer an outfielder capable of playing right field on a consistent basis, a bill that Ozuna probably doesn't fit at this stage of his career. Still, he could DH, and adding him into a lineup that already includes José Abreu, Luis Robert, Tim Anderson and Yasmani Grandal could make the White Sox the favorite to win a crowded American League Central in 2021. 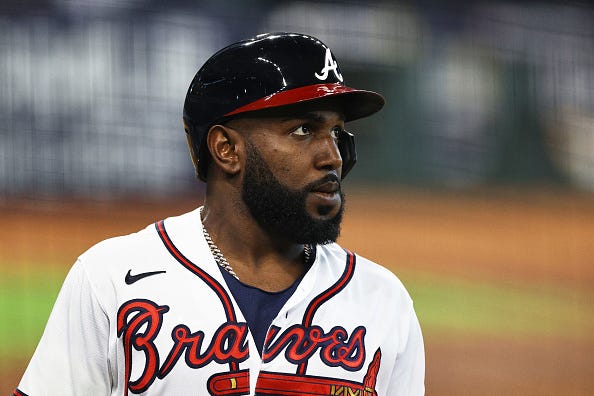 From here, the guess is that Ozuna won't return to Atlanta because the organization has had so much success at finding position players on the rebound without making long-term commitments. That said, if they were going to make a long-term commitment to anyone, Ozuna would seemingly be a tremendous candidate. While Freddie Freeman is likely to win the National League MVP, Ozuna is headed for a finish in the top-10, if not higher. The Braves had a 3-1 lead in the NLCS, and finished within a victory of reaching the World Series. One could understand if they feel an urge to run things back in 2021. The question is whether the Braves would feel comfortable having Ozuna play left field on an everyday basis, when he played in just 19 games at the position in 2020 when the DH was universal. 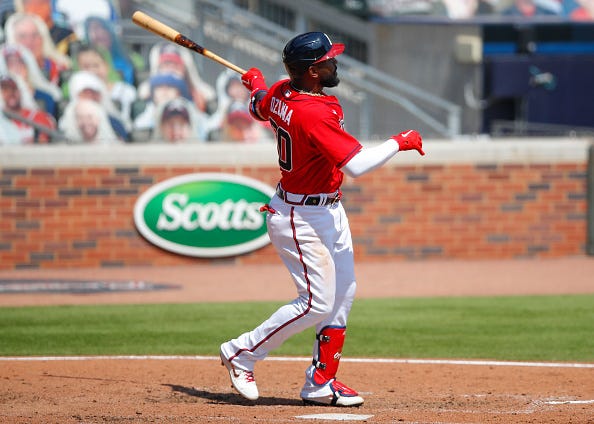 Tim Dierkes of MLB Trade Rumors normally makes pretty accurate free agent predictions, and he projected that Ozuna will land with the Nationals on a four-year/$72 million deal. From a lineup perspective, Ozuna is a nearly perfect fit, as the Nationals have lost Bryce Harper and Anthony Rendon in consecutive offseasons. That caught up to the Nationals in 2020, who finished in a tie for last place in the National League East. Adding Ozuna into a lineup that includes Soto and Trea Turner would alleviate some of the pressure on those two to be perfect. The question is whether there will be a DH in the National League in 2021, because Soto is entrenched in left field. If, for at least next season, pitchers begin batting again, would the Nationals feel comfortable with either Soto or Ozuna in right field on a regular basis? 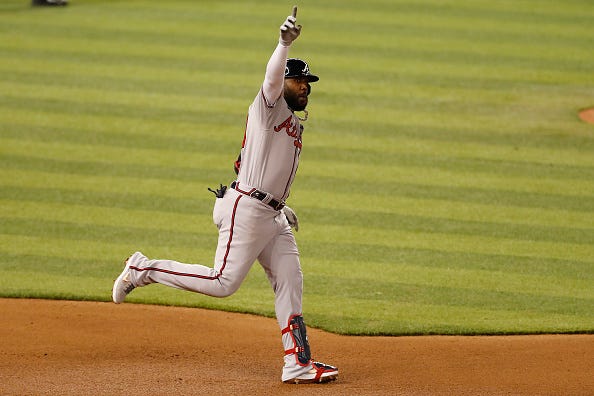 After what proved to be an underwhelming free agent market in terms of years offered last winter, Ozuna admitted that he wished he had accepted the Cardinals' one-year/$17.8 million qualifying offer. Perhaps a reunion could come to fruition this winter. The hope in St. Louis is that top overall prospect Dylan Carlson takes a major step forward in his first full major league season, but as is, the Cardinals could stand to add some pop in their outfield. Dexter Fowler is entering the final year of what's been a very disappointing five-year contract, and Harrison Bader's best trait is his defense. If there's no DH in 2021, Ozuna could play left field, with some combination of Bader, Fowler and Lane Thomas competing for at-bats in center and right field. If there is a DH in the National League, it's a pretty simple solution, Ozuna would fill that role on a regular basis while occasionally playing in the outfield, which is what he did in Atlanta this season. 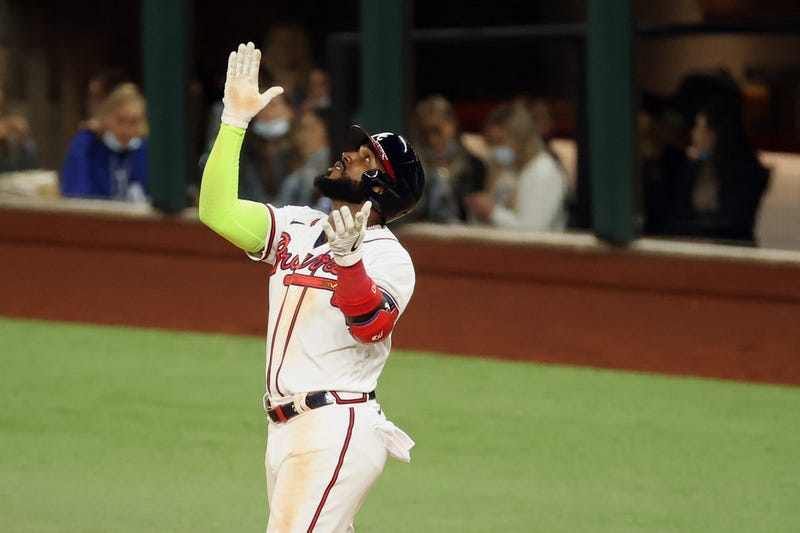 As they prepared to move into Globe Life Field, there was a thought that the Rangers may make a major investment in a star position player last offseason. Instead, they were unable to land either Anthony Rendon or Josh Donaldson, and ultimately received just one inning of work from offseason pickup Corey Kluber. As they look to catch up to the Oakland Athletics and Houston Astros in the American League West, Ozuna would seem to be a strong fit for the Rangers as a DH and occasional outfielder. He perhaps isn't a big enough name to draw fans to the park on his own, but one would think that the Rangers would like to field a competitive team in 2021, when they presumably will be allowed to have some fan presence at home games in their new stadium for the first time.