As two-time NFL MVP Kurt Warner attempted to revive his career following an injury-riddled finish to his time with the St. Louis Rams, he signed a one-year/$3 million deal with the New York Giants.

Ultimately, the Giants were never going to be a long-term landing spot for Warner. He signed with the team in June of 2004, a few months after the Giants acquired No. 1 overall pick Eli Manning from the San Diego Chargers. Eventually, Warner was going to give way to Manning.

Warner would start nine games for the Giants, posting a 5-4 record with six touchdowns to four interceptions. His brief time as the starting quarterback for the Giants wasn't a complete failure, but it was hardly the greatest show on turf.

The reason that Warner's brief time with the Giants is so memorable - besides him being the last Giants quarterback before Manning, the best in team history - is that it was sandwiched in between two incredible tenures. Above, we mentioned his six seasons in St. Louis, and after one year with the Giants, Warner was able to revive his career with the Arizona Cardinals. His time with the Cardinals peaked in 2008, when he guided the team to an appearance in Super Bowl XLIII. Before the game, there were quite a few pieces done on how he managed to return to elite form after a pretty underwhelming season in New York.

Though Warner's time with the Giants isn't something you've forgotten about, we're willing to bet that you forgot these five notable players had stints with Big Blue: 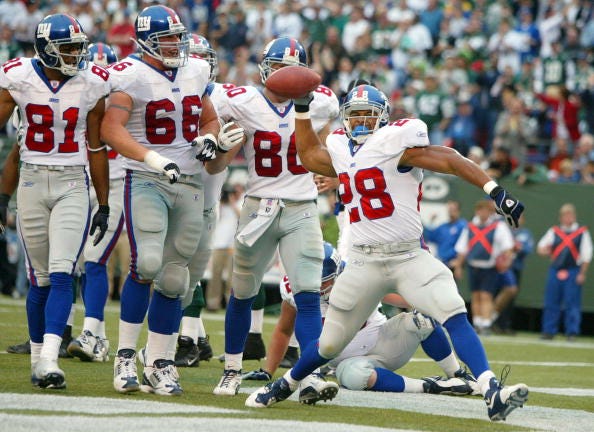 A Pro Bowler in 1997, Levens is most remembered for eight seasons with the Green Bay Packers, where he was one of Brett Favre's running backs. In between stints with the Philadelphia Eagles - where he reunited with former Packers assistant Andy Reid - Levens spent 11 games with the Giants in 2003. Six years after rushing for 1,435 yards, Levens averaged just 2.9 yards per carry in his age-33 season for the Giants. 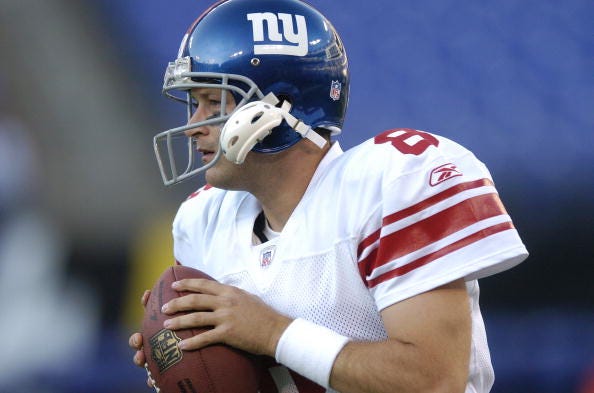 The younger brother of Matt, Hasselbeck has found success after a brief NFL career as a studio analyst for ESPN. An undrafted rookie out of Boston College, Hasselbeck saw action in four NFL seasons, also spending time with the Philadelphia Eagles, Washington Football Team and Arizona Cardinals. Hasselbeck took snaps in two games for the Giants in 2005, but never actually threw a pass for the team. 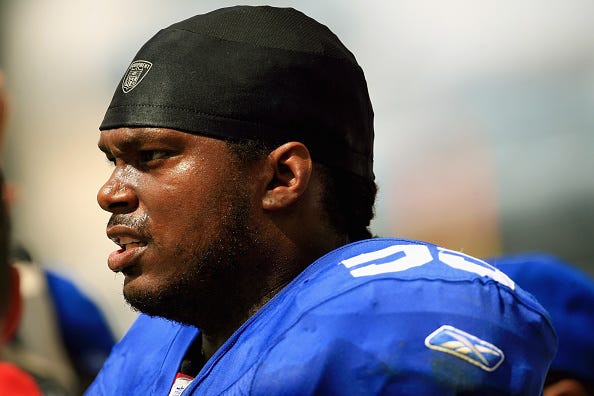 After an excellent collegiate career at Penn State, The Washington Football Team selected Arrington with the No. 2 overall pick in the 2000 NFL Draft. Arrington made three consecutive Pro Bowls between 2001 and 2003, peaking in the final of those three seasons when he forced six fumbles and had six sacks. Ultimately, though, injuries derailed Arrington's career, leaving him with a short peak. Following a rather ugly exit from Washington, Arrington agreed to a seven-year/$49 million deal with the Giants ahead of the 2006 season. The devil, of course, is in the details, as Arrington played in just six games for the team in 2006, and was released ahead of the team's Super Bowl-winning season in 2007. This is right around the time NFL fans were learning that all that really matters in a contract is the guaranteed money. 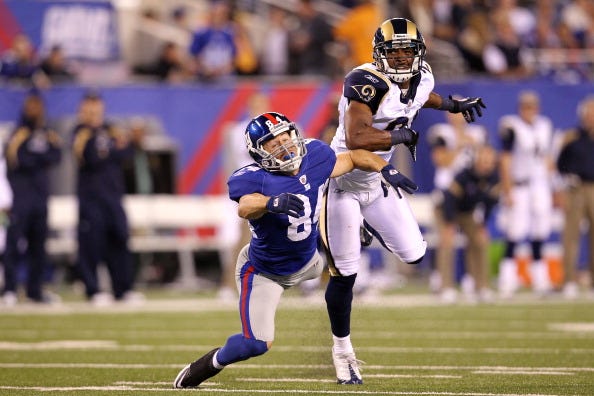 Stokley hung around for a decade and a half in the NFL in large part because he became a favorite target of Peyton Manning. Peyton's younger brother, Eli, hoped to form a similar bond with Stokley in 2011, but ultimately played in just two games for the team before being released because of a knee injury. Things worked out just fine for both parties, as the trio of Hakeem Nicks, Victor Cruz and Mario Manningham helped the Giants to win a Super Bowl title that season. Stokley would reunite with Peyton in Denver for the 2012 season, and actually caught 45 passes for 544 yards in his age-36 campaign. 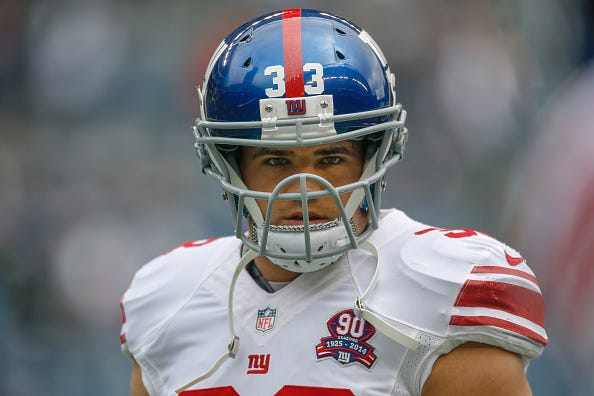 One of the great moments in the early history of social media was NFL fans voting Hillis onto the cover of Madden 12 after he rushed for 1,177 yards and 11 touchdowns on the 2010 Cleveland Browns, a team that went 5-11. Fast forward a few years, and Hillis was unemployed for a few weeks during the 2013 season, following his release from the Tampa Bay Buccaneers. He eventually caught on with the Giants for the remainder of the season, and played well enough in seven games that he was brought back for the 2014 season. Between 2013 and 2014, Hillis averaged 3.7 yards per carry with the Giants.