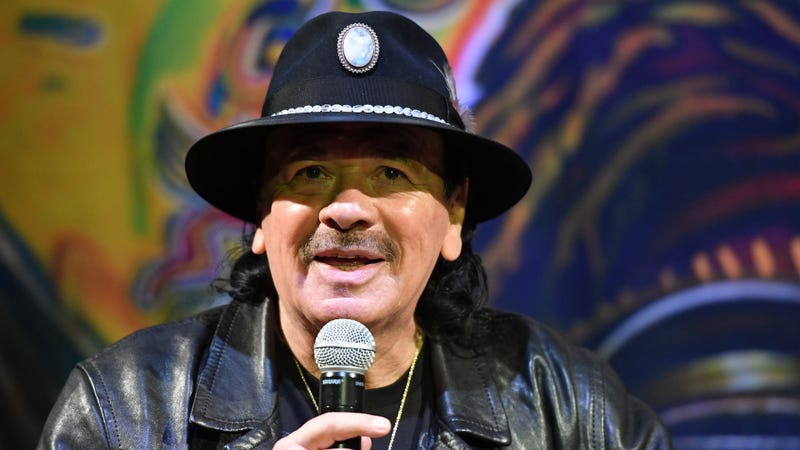 Carlos Santana is recovering after collapsing about 40 minutes into his set at the Pine Knob Theatre in Clarkston, MI on Tuesday night (7/5).

Fans at the show flooded social media with photos and videos from the concerning scene while offering thoughts and prayers as the 74-year-old was treated by medical staff on stage. About 30 minutes after the fall, he was wheeled off stage on a stretcher and seen waving to fans.

Carlos Santana waved to clapping fans as he’s helped off the stage pic.twitter.com/YA55N4QCZe

Scary scene in Clarkson, MI (outside of Detroit) tonight. Carlos Santana passed out on stage about an hour into his set. He did get up and was assisted off stage. Very warm and humid at this outdoor venue. Video: Rick Notter. Santana is currently scheduled back in LV in Sept. pic.twitter.com/994JEOZI0B

Carlos took to Facebook later that night to address fans writing, “To one and all. Thank you for your precious prayers. Cindy and I we are good just taking it easy. [I] forgot to eat and drink water so I dehydrated and passed out. Blessings and miracles to you all.”

The collapse comes less than a year after the singer canceled shows for an entire month due to a unpredicted heart procedure he underwent in December 2021.

According to a Facebook post by his manager, Michael Vrionis, Santana’s July 6 show at The Pavilion at Star Lake in Burgettstown, PA alongside Earth Wind & Fire for the Miraculous Supernatural Tour  has been postponed to a later date.

--From Team Santana: Rock Legend Carlos Santana was over-taken by heat exhaustion and dehydration during a concert Tuesday (July 5) evening in Michigan. The guitar great was taken from his show at Pine Knob Music Theatre (formerly DTE Energy Music Theatre), an outdoor amphitheater in Clarkston, some 40 miles northwest of Detroit, Michigan. Carlos was taken to the emergency department at McLaren Clarkston for observation and is doing well, it was announced by Santana’s manager Michael Vrionis tonight. “The show with Earth, Wind & Fire for tomorrow July 6th at The Pavilion at Star Lake (formerly the S&T Bank Music Park) in Burgettstown, PA will be postponed to a later date. More details to follow thru Live Nation,” Mr. Michael Vrionis added.