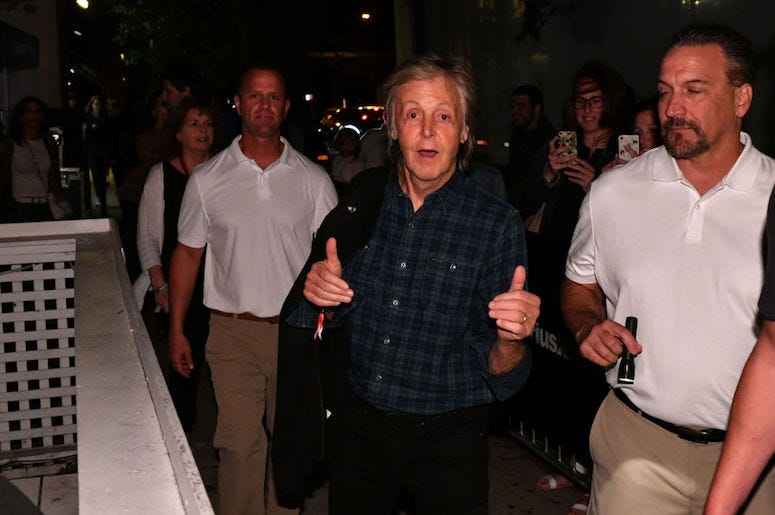 We all imagine a scenario where a major celebrity walks right by us and what our reaction would be. Some people may be surprised, others nonchalant, and a few might realize after it’s too late.

TikTok user Mae Archie falls into the latter category as she discovered she walked right by Paul McCartney when browsing photos she took on a street in New York City.

“Taking pictures in NYC then realizing when I get home THE Paul McCartney photobombed me,” she wrote over the TikTok video. Even better, Archie added she “just left the MET to see the Play It Loud exhibit and was legit looking at the Beatles set and everything.”

Hey, it happens. At least she has a photo proving she met McCartney. Albeit in a rather unconventional manner.

A teenager has been left “dumbstruck” after unknowingly bumping into a #Beatles legend (#PaulMcCartney) in NY.
“So I took it on the crosswalk but I was facing my mom (sic) so I never actually saw Paul until I turned around and made eye contact with him"
Credit: maebe.later/TikTok pic.twitter.com/cqYyfmvGKb

Paul McCartney recently celebrated the 50th anniversary of his self-titled debut solo album with the release of his latest record McCartney III.

McCartney III is a continuation of the self-titled album he first put out in 1970 (with McCartney II being released in 1980) and clocks in at eleven total tracks. The project was born out of quarantine and wasn’t something Macca initially intended to pursue.

“I was living lockdown life on my farm with my family and I would go to my studio every day,” McCartney said in a statement. “I had to do a little bit of work on some film music and that turned into the opening track and then when it was done I thought what will I do next?”

“I had some stuff I’d worked on over the years but sometimes time would run out and it would be left half-finished, so I started thinking about what I had,” Paul continued. “Each day I’d start recording with the instrument I wrote the song on and then gradually layer it all up. It was a lot of fun. It was about making music for yourself rather than making music that has to do a job. So, I just did stuff I fancied doing. I had no idea this would end up as an album.”