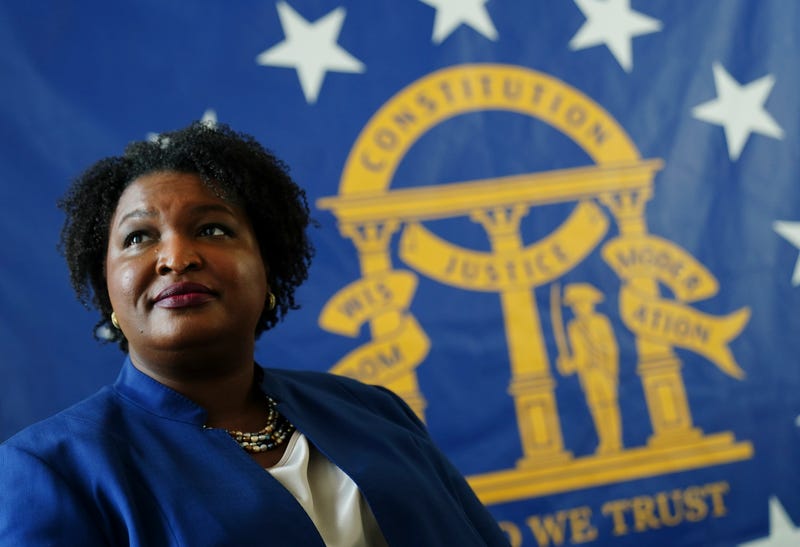 ATLANTA (AP) — Democratic gubernatorial candidate Stacey Abrams argued in a speech Tuesday that it's time for Georgia to use its budget surplus to invest in its residents, accusing Gov. Brian Kemp and other Republicans of hurting the state by prioritizing low taxes and low spending.

She also announced that she backs a state constitutional amendment to legalize casino and sports gambling, saying she wants to use it to fund need-based financial aid, guarantee free technical college and restore Georgia's HOPE merit scholarships to students who earn a C average or better in high school.

Abrams also weaved in attacks on restrictive abortion laws and loose gun laws, arguing that they too are threats to making Georgia thrive.

“We can do what’s right for Georgia by investing in our economy, saving healthcare, building infrastructure and taking care of our small businesses, our workers and our bottom line,” Abrams said during the Atlanta speech. “We can turn our state around and give back what has been taken from too many Georgians.”

Trailing in the polls, Abrams is focusing on the economy as she looks to press reset on an issue that has emerged as a top vulnerability for Democrats across the U.S. this year amid inflation and high gas prices. Kemp is hoping the economy is an especially potent issue for him in Georgia this year.

“This team has put our state on the path to greater economic opportunity for all who call the Peach State home," Kemp said in a campaign speech last month in the Atlanta suburb of McDonough. “We brought good paying jobs to every corner of Georgia, landed the largest economic development deals in our state’s history, passed the biggest income tax cut on record, and kept government out of your way and out of your pocket.”

Kemp plans to unveil his own plans on Thursday for some of Georgia's surplus. It will include another billion dollars in state income tax rebates, plus a property tax break for homeowners, said a Kemp campaign official with knowledge of the governor’s plans who spoke on condition of anonymity to preview the announcement.

Nodding at Abrams' work as a voting rights advocate, Kemp said she shares responsibility for surging inflation and stubbornly high gas prices by helping get Joe Biden elected. He calls it the “Biden-Abrams agenda."

Abrams and other Democrats hope to pivot away from inflation and toward ways government can help voters. Many of her plans are the same as when she ran against Kemp in 2018, including expanding the Medicaid health insurance program to all low-income adults and expanding state aid to small businesses.

But in 2022, Georgia is flush with cash. The state closed its budget year in June with a roughly $5 billion surplus, atop $2.3 billion from the year before, and a legally protected $4.3 billion rainy-day fund.

Abrams acknowledges austerity may have been necessary during the Great Recession. Now, though, she says Kemp's “poverty of imagination" is foreclosing opportunity for too many.

“I liken it to a company that realizes a windfall," Abrams said in an interview with The Associated Press on Monday previewing the speech. “You can either give dividends to your wealthiest shareholders or you can invest in the infrastructure of your company so you can create more opportunities and create more revenue. I want to do the latter.”

Kemp warns that increasing spending will worsen inflation and argues Abrams will ultimately seek to raise taxes after spending the surplus.

“What she really believes is more government, controlling more and more of your everyday lives, and taking more of your hard-earned paychecks,” Kemp said in McDonough.

Abrams flatly vows not to raise taxes and says her spending plan is sustainable.

Many Democrats have long supported gambling as a way to spend more without raising taxes. Abrams on Tuesday cited her 2011 deal with Republicans to cut lottery-funded HOPE scholarship benefits to shore up a program where expenses were outstripping lottery proceeds. But now she's proposing to undo those cuts, also partly using a giant lottery reserve fund, restoring free technical college and expanding benefits to lower-achieving students that were curtailed under that deal.

Proposed gambling expansions have failed on an annual basis in the legislature, needing support of two-thirds of lawmakers before the proposed constitutional amendment could be put to voters for approval in a referendum.

“We can turbocharge higher education and economic opportunity for all of Georgia's students," Abrams said.

Abrams is trying to eclipse Kemp on some policies, arguing for another round of checks to taxpayers like Kemp's billion-dollar state income tax rebate. Kemp has repeatedly suspended Georgia’s state gas tax for short periods, but Abrams calls for Kemp to pledge now to suspend it until the end of the year. And Abrams has pledged not to repeal a state income tax cut that could ultimately reduce taxes by $2 billion.

Kemp said Abrams’ support for his proposals shows voters he's the one to trust.

“I’m running on my record. You know what Stacey Abrams' record is? It’s going to be different tomorrow than it was today, I can tell you that,” Kemp said Thursday during a northeast Georgia campaign stop in Toccoa.

Abrams notes Georgia ranked 24th among states for per-capita income in the early 2000s but has slid to 40th. Although close observers debate the cause of that, Abrams ascribes it to steering too many benefits to the rich.

She said she envisions a focus on small businesses, helping minority-owned businesses catch up and promoting economic mobility in a region of the country where poor people are the least likely to get ahead.

“You might assume that this is as good as it gets. It’s not true,” Abrams said. “We are entitled to more. Our taxes have paid for more and now it is time to get our money’s worth.”