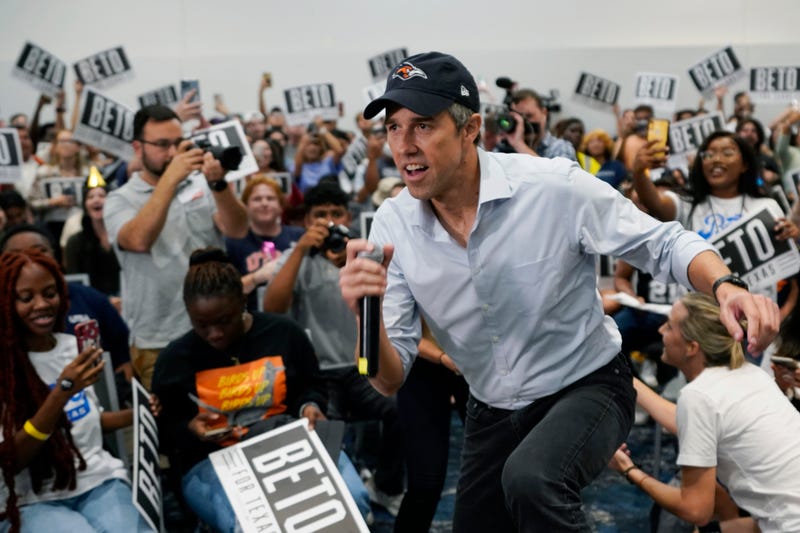 AUSTIN, Texas (AP) — Beto O'Rourke spent his 50th birthday this week behind the wheel of his pickup in Texas, fast approaching a big moment in his uphill climb for governor.

While a road trip through college campuses showed how the Democrat continues to draw big crowds — a photo line at the University of Texas snaked across an outdoor plaza in 90-degree heat — O'Rourke is still trying to close in on Republican Gov. Greg Abbott with six weeks until Election Day, Nov. 8.

That raises the stakes for O'Rourke on Friday night in his only debate against Abbott, who has tried to refocus the race to his hard-line immigration measures on the U.S.-Mexico border as anger in Texas over a new abortion ban and the Uvalde school massacre continues flaring.

With early voting set to begin in just over three weeks, some O'Rourke supporters are looking for significant swings during the debate, which the former 2020 presidential candidate knows better than most can leave a lasting impression.

“Here's the way I see it: Most Texans are just beginning to tune into this election,” O'Rourke said in an interview. The Democrat emphasized that Abbott started running television spots before his campaign, which has pulled in at least $30 million and has put the two-term governor in the rare position of being outraised.

Abbott, who wants to stomp out Democrats' latest attempt to flip America's biggest Republican-led state, isn't ready to say this may be his tightest race.

"This game ain't over yet, and we'll see how close it is when all is said and done," he told reporters this month.

Like many Democrats running in November, O'Rourke is drawing on outrage over abortion access and mass shootings, issues that have energized voters elsewhere. But as Texas Democrats also know, those same issues have failed to carry them in past elections.

A new Texas abortion ban is threatening GOP support with women and has already caused stumbles for Abbott over unpopular restrictions that make no exceptions for rape victims. The Uvalde school shooting that killed 19 children and two teachers has also elevated emotions in the race, with grieving parents scolding Abbott and O'Rourke swearing at a heckler who laughed over gun control.

O’Rourke, shrugging off recent polls that showed him trailing, pointed to traditionally conservative Kansas rejecting an abortion ban and Democrats winning special congressional elections in New York and Alaska as a sign of a shift in the electorate heading into November’s midterms.

To say O'Rourke has been here before would be true of just about anywhere in Texas.

Just as he did in his breakthrough U.S. Senate campaign in 2018, O'Rourke has spent months visiting nearly every corner of the almost 800-mile-wide state, driving into the most strongly Republican counties in an effort to weaken the wall of rural support that has helped the GOP offset losses in booming big cities and suburbs.

He stunned both parties four years ago by finishing within 3 percentage points of unseating Republican Sen. Ted Cruz. In the governor's race, O'Rourke has run a more attacking campaign but also has been forced to confront his past positions, none more than his promise to ban AR-15-style weapons during a Democratic presidential debate in 2019.

In the aftermath of the Uvalde shooting, O'Rourke has called to raise the minimum age to purchase such weapons to 21, something Abbott has already ruled out.

“If Beto can coax Abbott into a moment where there's a stark difference on, say, gun control I think that can have a big impact,” said Jason Villalba, a former Republican state lawmaker. “But to do that you have to be aggressive and take large risks."

Villalba, who now runs the Texas Hispanic Policy Foundation, said O'Rourke has had to overcome “baggage” from his presidential campaign. Villalba believes the fortunes of the former El Paso congressman are in the hands of newly registered women voters and whether he can close the gap in rural counties.

Friday's debate is in Edinburg, along the southern border, where Abbott and Republicans are trying to make aggressive inroads with Hispanic voters after the region, traditionally a Democratic stronghold, made big swings toward then-President Donald Trump in 2020. It will be the first time the two candidates have been face to face since O'Rourke confronted Abbott in Uvalde after the shooting, which drew a mix of boos and cheers from the crowd at the time.

“I think he just feels like, 'I've had enough' and we all feel that way,” said Mary Zambrano, 32, who dropped in to see O'Rourke at an Austin gymnasium on Saturday. “At this point, you have to go all in.”