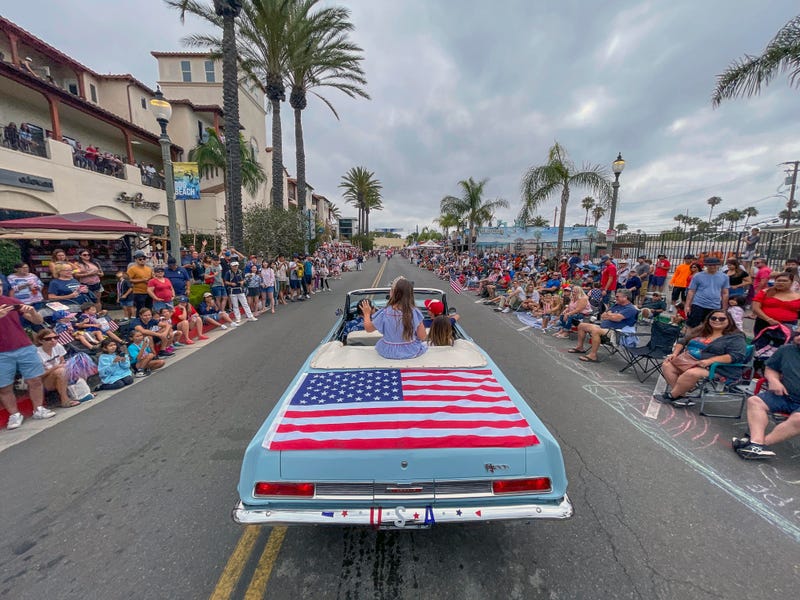 A shooting that left at least six people dead at an Independence Day parade in a Chicago suburb rattled Monday's celebrations across the U.S. and further rocked a country already awash in turmoil over high court rulings on abortion and guns as well as hearings on the Jan. 6 insurrection.

The latest mass shooting came as the nation tried to find cause to celebrate its founding and the bonds that still hold it together. It was supposed to be a day for taking off work, flocking to parades, devouring hot dogs and burgers at backyard barbecues and gathering under a canopy of stars and exploding fireworks.

“On a day that we came together to celebrate community and freedom, we are instead mourning the tragic loss of life and struggling with the terror that was brought upon us,” Highland Park Mayor Nancy Rotering said.

The Highland Park parade began around 10 a.m. but was suddenly halted 10 minutes later after shots were fired. Hundreds of parade-goers — some visibly bloodied — fled the area, leaving behind chairs, baby strollers and blankets. Authorities brought a person of interest into custody Monday evening.

As the Highland Park community mourned, fireworks began thundering in neighboring towns and across the country. Pyrotechnics bloomed shortly after nightfall in Boston and New York City, where a kaleidoscope of color exploded over the Hudson River and illuminated skyscrapers.

President Joe Biden, in remarks Monday celebrating 246 years of America’s independence, sought to reassure a nation both exhausted and unsettled by recent events.

“In recent days, there’s been reason to think this country is moving backwards, that freedom is being reduced, that rights we assumed were protected are no longer,” Biden said in remarks to military families and administration officials enjoying a picnic on the South Lawn of the White House. “I know it can be exhausting and unsettling, but tonight I want you to know we’re going to get through all of this.”

Biden said many people see a divided country, but “I believe we are more united than we are divided.”

He tweeted earlier in the day about the shooting, calling it “senseless gun violence that has yet again brought grief to an American community this Independence Day.”

"I will not give up fighting the epidemic of gun violence," the president tweeted.

These are precarious times: An economic recession lurks, and the Highland Park shooting will weigh on a national psyche already raw from mass shootings like those seen recently at a Texas elementary school and a New York supermarket.

Sharp social and political divisions have also been laid bare by recent Supreme Court decisions overturning the constitutional right to abortion and striking down a New York law limiting who may carry a gun in public.

Nevertheless, many had reason to gather and celebrate for the first time in three years amid easing coronavirus precautions.

“It’s beautiful to be back here," Joey “Jaws” Chestnut told ESPN after winning the men's competition by downing 63 hot dogs and buns — even as he momentarily put a protester who rushed the stage in a chokehold. Miki Sudo chomped 40 franks to win the women's event.

Colorful displays were scheduled to light up the night sky from coast to coast. However, others, particularly in drought-stricken and wildfire-prone regions of the West, would forgo them.

Fireworks were the suspected cause behind a fire in Centerville, Utah, that led to the evacuation of dozens of homes and the cancellation of some of its Independence Day events, officials said.

It was a different matter in Phoenix, which is again going without fireworks — not because of the pandemic or fire concerns but supply-chain issues.

In emotional ceremonies across the country, some swore oaths of citizenship, qualifying them to vote in the upcoming midterm elections.

During a ceremony for naturalized citizens held at Mount Vernon, the Virginia home of George Washington, Treasury Secretary Janet Yellen told 52 people originally from 42 different countries that they were essential to building a strong labor force.

“Immigrants strengthen our workforce, and, in the process, help drive the resiliency and vitality of our economy,” Yellen said in remarks prepared for the Monday event.

For many, July 4 was also a chance to set aside political differences and to celebrate unity, reflecting on the revolution that gave rise to history’s longest-living democracy.

“There’s always something to divide or unite us," says Eli Merritt, a political historian at Vanderbilt University whose upcoming book traces the fraught founding of the United States.

But he sees the Jan. 6 hearings probing last year's storming of the U.S. Capitol as a reason for hope, an opportunity to rally behind democratic institutions. Even though not all Americans or their elected representatives agree with the committee's work, Merritt is heartened by the fact that it's at least somewhat bipartisan.

“Moral courage as a locus for Americans to place hope, the willingness to stand up for what is right and true in spite of negative consequences to oneself," he said. "That is an essential glue of constitutional democracy.”