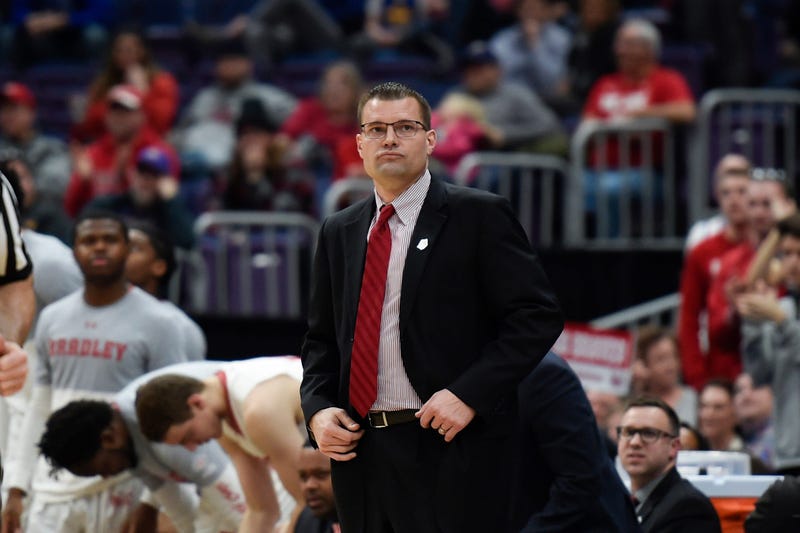 (670 The Score) It was supposed to be one big party for Bradley on Selection Sunday, a celebration of its unexpected Missouri Valley Conference championship and automatic bid to the NCAA Tournament, where the 15th-seeded Braves will face the second-seeded Michigan State Spartans in the round of 64 on Thursday.

Instead it's national embarrassment, all due to an entirely avoidable and petty overstep by a coach more focused on avenging perceived slights than ensuring that his players have the most rewarding and successful experience they can.

Bradley coach Brian Wardle made the call to bar 29-year Peoria Journal Star reporter Dave Reynolds on Friday afternoon, reportedly instructing one of his administrative toadies to tell Reynolds he was frozen out because, "You don't promote the Bradley brand." It comes after Wardle had threatened such a tactic ominously after his first year, when he told Reynolds, "We're going to be good someday, and I'll remember who my friends were."

This stupidity was exposed and decried swiftly and across the board, of course, forcing the university to spend much of Saturday slapping flimsy PR field-dressings on the self-inflicted wound. It was eventually made clear to them that suppressing objective media coverage was a bad look for an institution of higher learning, particularly one boasting the Charley Steiner School of Sports Communication. To his credit, Steiner himself went in hard on the behavior of his alma mater.

"This whole episode goes against the grain of everything I believe in," Steiner told the Journal Star. "My name is attached to all this. The School of Sports Communication includes journalism, ethics, what's right and wrong. It is so sad on so many levels."

And this is all about Wardle, whose lack of judgment should alarm his bosses. A coach for whom Wardle once played spoke to 670 The Score to say he wasn't at all surprised by this. The coach requested anonymity.

"The guy was a spoiled baby," he said. "Played hard but always pouted when he did not get his way."

"Not to mention the condescending attitude toward teammates, all the sarcasm and the snide side comments."

And Wardle is the very guy who upon his hiring in Peoria told the Chicago Tribune that his focus was "building that culture of winning and unselfishness."

"When you have a destination you want to reach, you have to go above and beyond and work for it," Wardle said to the Tribune then "You're going to have to make sacrifices. You might have to sacrifice social time or this and that."

If this sounds to you like the Steve Alford starter set, you're picking up on just the right things. All the same unctuous sanctimony and also no actual