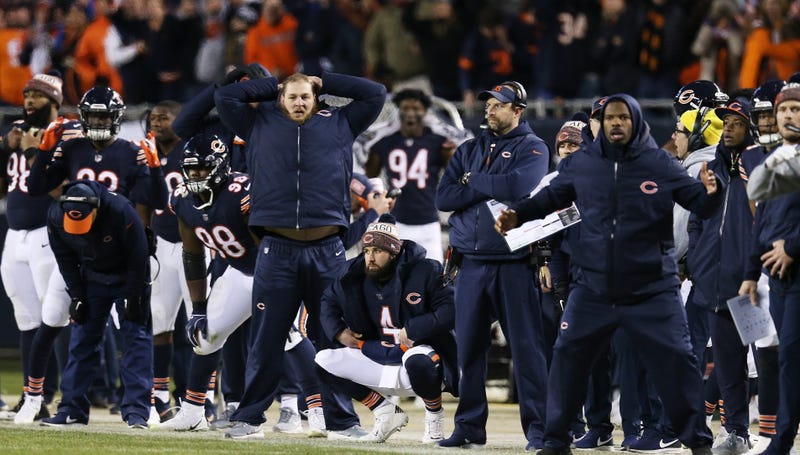 There's no doubt that what we're about to do fits that description in a sense both figurative and literal, and I'm willing to place the above apostrophe however it feels comfortable. We can wear the self-punishment of the loser hairshirt together, or I'll handle it for the purposes of the exercise.

But let's be real -- the 2018 Bears could've beaten Sunday's Patriots or Sunday's Rams. The fact that any number of other teams can also say this misses the point, which is apparently to make a painful playoff ouster somehow feel even worse in the aftermath. The Chiefs or Colts or Eagles or whomever don't have the hollow metallic gong of ball on goalpost still ringing in their heads, though, and only the Saints have a fresher comparative hell.

The Bears already did to Jared Goff pretty much what Bill Belichick and the Patriots did, speeding up his internal clock and making his feet get all weird, forcing four interceptions in their 15-6 win in December. The Bears held Todd Gurley to 28 yards on 11 carries even before he dissolved further into this ineffective version of himself. They took away the primary objectives that Sean McVay's offense wanted to accomplish and exposed the Rams for having no alternate plan, the same thing that we just saw happen in Atlanta.

When the Patriots came to Soldier Field in October, they won 38-31, but the Bears were missing Khalil Mack. Technically, he played, but he was on one functioning leg and remained enough of a non-entity that he sat out the following two games. Not having the services of a top-three NFL defender is a big reason why the Bears surrendered nearly 400 yards of offense, and we presume his return in this theoretical discussion.

And that's really all this is, a twisted way of verbalizing the feeling of knowing that the Bears may have squandered a great chance to at least compete for a title. There was nothing too special or unstoppable on display at the sport's latest iteration of its biggest event, just enough relentless competence acting on years of muscle memory. So don't let all the paeans to historic greatness obscure some very ordinary football that you know you saw.

Nothing was occurring at some otherworldly level in the Super Bowl that would convince you that Mack and Vic Fangio's star-studded defense and Mitchell Trubisky and the just-minted NFL Coach of the Year would be decidedly outclassed. Far from it in fact, and that's what stings.

It's not about anything the Bears deserve, not like the reasonable complaints in New Orleans about getting jobbed. The Bears didn't score enough points against the Eagles, didn't get the stop they needed on fourth down and couldn't keep it from all hinging on a swing of the leg from their jittery kicker.

But if that guy had made it, there's no question anymore that they had more than a chance to be the last team standing -- and it just might have been their best one that now has nothing to show for it but a slew of individual awards and valued coordinator made available at just the right time for a promotion.

With the benefit of hindsight, it's clear beyond question that the Bears were easily good enough to be champions in 2018, but they weren't.

I never said this game was going to be fun.