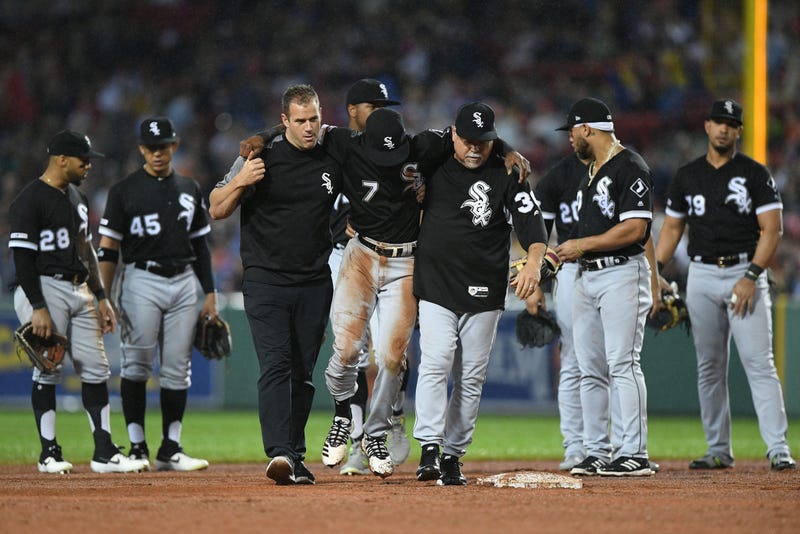 (670 The Score) In what has become a frustrating and head-shaking trend, the White Sox have been hit with more injuries.

At the big league level, shortstop Tim Anderson will miss four to six weeks with the nasty right ankle sprain that he suffered in a loss at Boston on Tuesday, general manager Rick Hahn said Friday. Officially placed on the 10-day injured list earlier in the day, Anderson will now be out until at least late in July. Anderson has 11 homers, 37 RBIs and a slash line of .317/.342/.491 in 70 games.

Right-hander Ryan Burr recently had Tommy John surgery and will miss the rest of the season. He had a 4.58 ERA in 16 appearances for the White Sox this season.

The injuries are also piling up in a big way in the White Sox's farm system. Double-A right-hander Zack Burdi will miss the rest of the season after tearing a ligament in his patella. The 24-year-old Burdi was struggling mightily this season, posting a 6.41 ERA and 1.88 WHIP in 17 relief appearances for Birmingham.

Double-A right-hander Jimmy Lambert recently underwent Tommy John surgery and will miss the remainder of the year. He had a 4.55 ERA in 11 starts for Birmingham.

Third baseman Jake Burger, whom the White Sox selected in the first round in 2017, has a bruised left heel and is day-to-day. There's no timetable for his return. He missed all of 2018 with a ruptured Achilles, which is re-tore in May 2018 to delay his readiness for 2019. The organization's hope is that he'll return to get some action at the tail end of this season, perhaps in instructional league, which starts in mid-September. If not then, he could possibly return to action in the Arizona Fall League.

Triple-A right-hander Ian Hamilton will also miss the remainder of the season after being struck by a line drive a few weeks ago. He'll need surgery to fix facial fractures and to repair his jaw. Hamilton, 24, was struggling in recording a 9.92 ERA in 16 relief appearances.