(670 The Score) Nearly one year after reaching a $197-million purchase agreement on the 326-acre Arlington Park property that a new stadium could be built on, the Bears on Tuesday moved forward with their plan for what the team is calling “one of the largest development projects in Illinois state history.”

The Bears unveiled their preliminary master plan and renderings for their proposal for the Arlington Park property, which will include a “best-in-class enclosed stadium” to attract events like the Super Bowl, College Football Playoff and Final Four. The stadium will be surrounded by a multi-purpose entertainment district featuring restaurants, hotels and more.

In an open letter, the Bears announced they won't seek public funding for "direct stadium structure construction" but do "look forward to partnering with the various governmental bodies to secure additional funding and assistance needed to support the feasibility of the remainder of the development." The Bears will hold an informal community meeting Thursday at Hersey High School in Arlington Heights to present their conceptual plans.

"Much remains to be decided, but any decision will be made in the best interests of the Bears' long-term future, our fans and the Chicagoland community,” the Bears wrote.

Here's a look at the renderings that the Bears shared of the proposed development. The stadium that's shown is a placeholder. 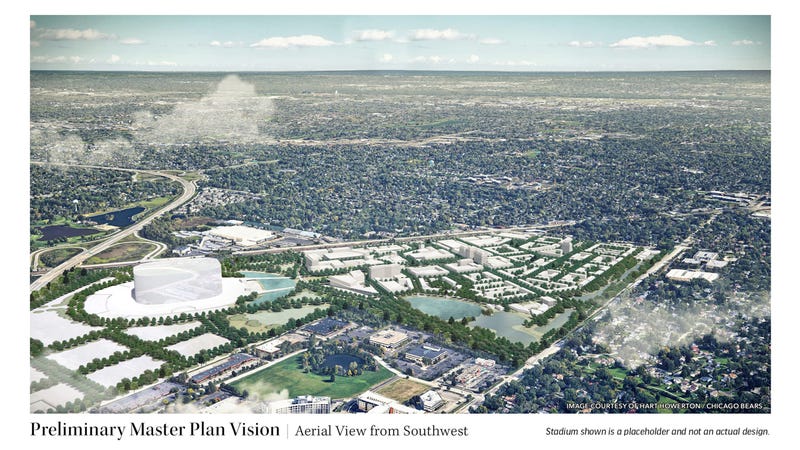 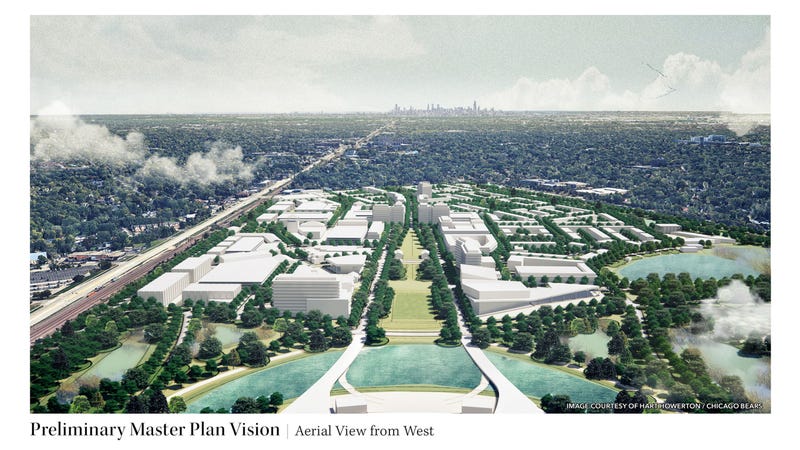 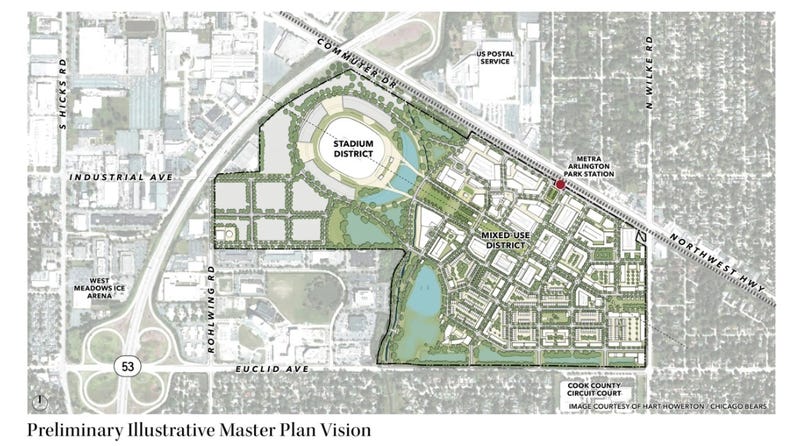 Here's a look at the Bears' full open letter about the Arlington Park property, which the organization hasn't yet closed on.

‎”In September 2021, the Chicago Bears signed an agreement for the purpose of acquiring 326 acres of property in Arlington Heights to secure the potential of beginning a new and exciting chapter there. We remain under contract to purchase the property, but there are conditions that must be met in order to be in a position to close. If we do close on the property, it does not guarantee we will develop it. While under contract with the seller of Arlington Park, we will not be discussing or exploring any other alternative stadium sites or opportunities, including renovations of Soldier Field. Much remains to be decided, but any decision will be made in the best interests of the Bears long-term future, our fans and the Chicagoland community.

‏‏”‎If the team does proceed with the purchase of the Arlington Park property, and if the Bears organization then chooses to proceed with the development of the property, the project will be one of the largest development projects in Illinois state history. We envision a multi-purpose entertainment district anchored by a new, best-in-class enclosed stadium, providing Chicagoland with a new home worthy of hosting global events such as the Super Bowl, College Football Playoffs, and Final Four.

‏‏‎”‎Make no mistake, this is much more than a stadium project. Any development of Arlington Park will propose to include a multi-purpose entertainment, commercial/retail, and housing district that will provide considerable economic benefits to Cook County, the surrounding region and State of Illinois. The long-term project vision for the entire property is an ongoing work-in-progress, but could include: restaurants, office space, hotel, fitness center, new parks and open spaces, and other improvements for the community to enjoy.

‏‏‎ ‎‏"‏‎Above all, the Bears organization is committed to ensuring the project serves Cook County, the Chicagoland community and people of Illinois 365 days a year. If the decision is made to develop Arlington Park, it would yield significant economic benefits commensurate with the scale of the project. Construction of the proposed project is projected to create more than 48,000 jobs, result in $9.4 billion in economic impact for Chicagoland, and provide $3.9 billion in labor income to workers across the region, while the completed project will create more than 9,750 long-term jobs, result in $1.4 billion in annual economic impact for Chicagoland and provide $601 million in annual labor income to workers across Chicagoland. We also anticipate that the development will generate $16 million in annual tax revenue in addition to property taxes for Arlington Heights, $9.8 million for Cook County, and $51.3 million for the State of Illinois.

“‎While the Bears will seek no public funding for direct stadium structure construction, given the broad, long-term public benefits of this project, we look forward to partnering with the various governmental bodies to secure additional funding and assistance needed to support the feasibility of the remainder of the development.

“‎We are taking serious steps to evaluate the unique opportunity presented to us. The Bears remain committed to Soldier Field and will honor the terms of its lease. While the prospect of a transit-oriented mixed-use and entertainment district anchored by a new enclosed stadium is exciting for the Bears and the entire state, there is much work to be done before we can close on the property, and then, whether we will develop it. We look forward to working with key partners and stakeholders across the Chicagoland community and State of Illinois in the months ahead.”

Earlier Tuesday, Chicago mayor Lori Lightfoot was again asked about the Bears' potential move to Arlington Heights. She responded that the city will continue its fight to keep the Bears at Soldier Field, where they've played since 1971. The Bears lease Soldier Field from the Chicago Park District.

“I don’t think it changes it at all,” Lightfoot told reporters when asked if Bears president Ted Phillips announcing his retirement changes the dynamic at all. “As I said a month ago, we were going to make a very compelling case for them to stay in the city of Chicago. And I think we’ve done that. And we’re going to continue our discussions. We’re going to continue our discussions with the league. As you know, I’m somebody who likes to plan. So we’ve got plan B, plan C and others in the works as well if the Bears decide that they’re going to abandon the city of Chicago. I hope they don’t. And we’re going to keep fighting that fight as long as we possibly can.”