CHICAGO, Ill. (670 The Score) -- At the end of the Bears’ 23rd loss in their last 26 games against the rival Packers, Green Bay star quarterback Aaron Rodgers gave a salute to the fans at Soldier Field before they stormed for the exits Sunday afternoon.

It was a familiar scene as Rodgers led the Packers to a 28-19 win and once again staked his claim to ownership of the Bears, who are a drastically undermanned 3-10 team with four games left in a rebuilding season.

Rodgers and the Packers left the Bears to lament coming up short like so many times before.

“It’s disappointing. We want to do what we can to come away with a win.”

On Sunday, the Bears played with just one regular starter in their secondary: third-year cornerback Jaylon Johnson. Rookie cornerback Kyler Gordon and safety Jaquan Brisker are in the concussion protocol, cornerback Kindle Vildor is dealing with an ankle injury and veteran safety Eddie Jackson is out for the season with a Lisfranc injury.

For a defense that’s struggled to generate a consistent pass rush and had such instability in the secondary, the Bears recognized Sunday would be a fight for survival against Rodgers. They could only stay alive for so long. 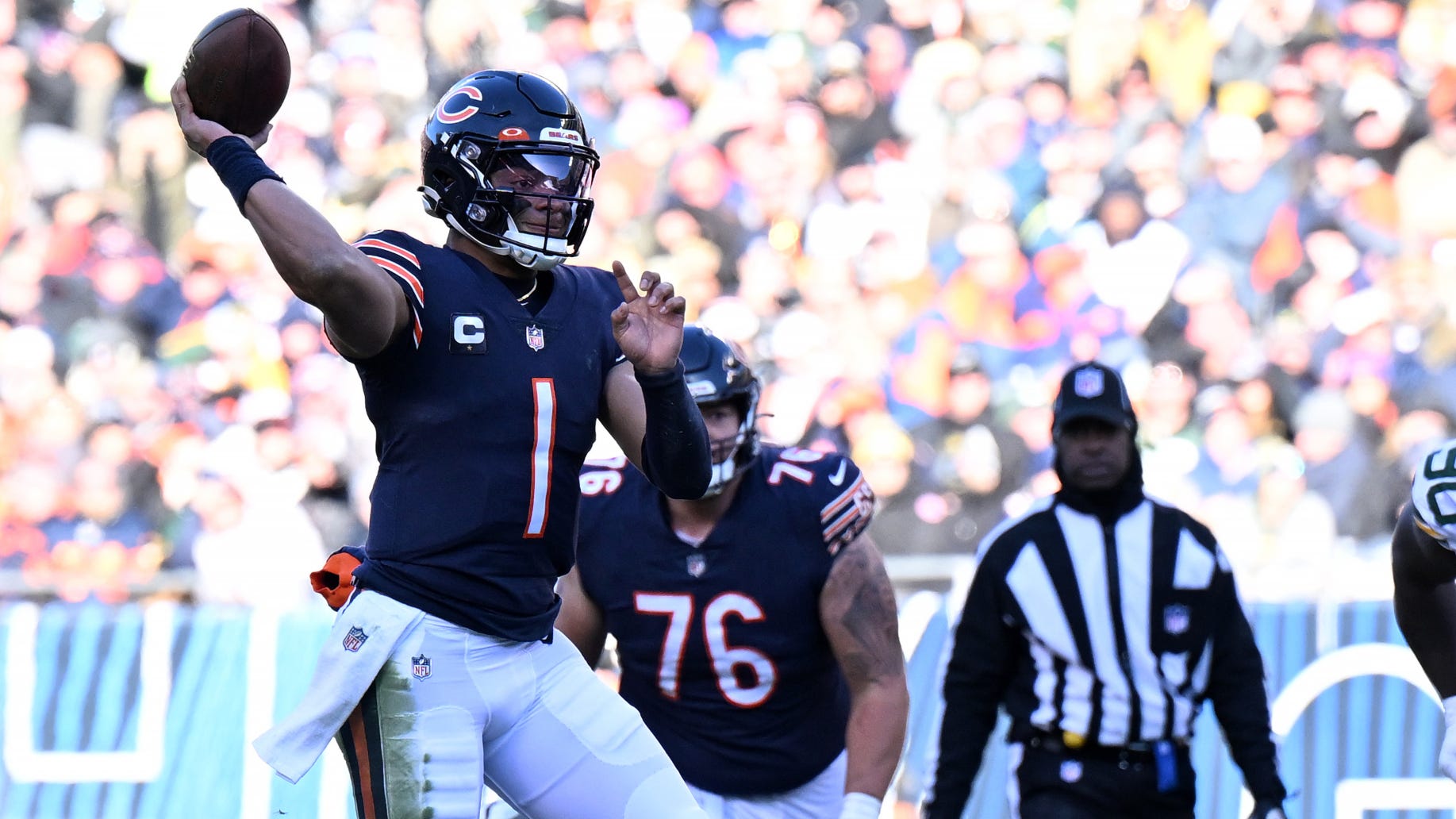 Bernstein: Bears lose a battle of bad teams, but let's not lose sight of what's going on here

Rodgers changed this game with a 14-yard touchdown pass late in the second quarter on a fourth-and-4 play, one in which it seemed Bears coach Matt Eberflus was daring the Packers to take a chance as he called a timeout when Green Bay looked ready to send its kicking team out to the field. Rodgers came back out after the timeout, extending the play in the pocket before finding rookie receiver Christian Watson in the end zone.

Bears rookie safety Elijah Hicks, a seventh-round pick making his first NFL start, explained that he was simply trying to stay in coverage on Watson as long as he could while Rodgers bought himself time to make a play.

Hicks’ effort was representative of this entire Bears team, which has put in the work and fought each game but simply can't finish with wins.

“I’m so proud of the dudes I was out there playing with,” Hicks said. “We worked so hard during the week, and we were doing extra meetings together. You could see that on the field, seeing how it helped us and benefited us.

“Other than those plays, it was like we were on top of everything. They didn’t do nothing that we weren’t ready for. We were on it. That's why it hurts. But I'm so thankful to be with this team, this defense, these guys in the secondary. Those dudes worked their ass off.”

The Bears are growing tired of that feeling as they ride a six-game losing streak and are frustrated by Rodgers' continued theatrics twice a season. They badly want to tilt the balance of power in the rivalry with the Packers and are eager to see it through.

Perhaps Sunday will mark the end of the Packers' decade-long dominance in their longstanding rivalry with the Bears and be a turning of the page. Rodgers could be traded in the offseason by Green Bay, which needs to find a way to retool its roster. On the other side, Chicago has a budding star in second-year quarterback Justin Fields.

For the first time since before Brett Favre arrived to Green Bay in 1992, the Bears have a better outlook at quarterback than the Packers. But they lack the talent around Fields needed to win games.

Bears general manager Ryan Poles hopes to change that this offseason, with Chicago likely headed for a top-five pick in the 2023 NFL Draft and projected to have the most salary cap space of any team in the league.

For his part, Fields was 20-of-25 for 254 yards and two interceptions while adding six carries for 71 yards on the ground, including a spectacular 55-yard touchdown run. But at times, Fields was let down by his teammates. His first interception came after receiver Equanimeous St. Brown failed to break hard enough on a dig route and Packers cornerback Jaire Alexander anticipated the throw. Fields threw a second pick with 51 seconds remaining as he tried to force a pass toward the end zone while trying to extend the game.

Fields had one of his most well-rounded performances of his second season while returning from a left shoulder injury. Sunday was a glimpse of how the Bears could develop around him and alter the course of the rivalry with the Packers.

From afar, the Bears have watched for three decades how great quarterback play can change a franchise – they've just been on the wrong side of it. From Favre to Rodgers, the Packers have enjoyed a great run of success.

Because of Fields, there’s now hope that the Bears can build a winner in the coming years. If Chicago has its way, Sunday was Rodgers' final salute and the last time that this rivalry is owned by Green Bay.

"Every game drives me," Fields said. "Of course this one means more, but I want to win every game. It’s just that simple."