(670 The Score) For Justin Fields, it was everything he wanted.

Fields walked onto the field with 1 minute, 47 seconds left in the game Sunday with a chance to lead his team to victory at Mercedes-Benz Stadium, an opportunity he surely dreamed of as a kid living 25 miles away in Kennesaw, Ga.

The Bears had the ball at the 25-yard line, trailing 27-24 to the Falcons team that Fields rooted for growing up, playing in front of Fields' family and close friends there to see if he could fulfill every boy’s childhood football fantasy.

Alas, reality intervened. The NFL can be cruel that way.

On third-and-5 from the Bears’ 30, Fields threw an unorthodox jump pass too high intended for David Montgomery that Falcons free safety Jaylinn Hawkins intercepted to clinch a 27-24 victory. The pick dashed the Bears' hopes and detracted from Fields’ overall progress but, if every interception is a story, the tale of this one starts by trying to explain how the Bears coaching staff let everyone down on the last drive.

The burden for this breakdown fell primarily at the feet of offensive coordinator Luke Getsy more than the sore shoulders of Fields. If Fields’ execution was bad, Getsy’s imagination was worse. As a result, the Bears once again needed to move the ball via the pass but either couldn’t or wouldn’t and will have to endure the questions that come with that trend.

The poor decision-making started on first down, when the Bears called a designed running play for Fields that went for a yard and resulted in the quarterback aggravating a left shoulder injury badly enough for the team to burn a timeout. Ordinarily, that Fields run might not have stood out as a questionable call for the NFL’s most dangerous running quarterback, but this was no ordinary situation. Before taking the field, Fields required the attention of the Bears training staff on the sideline after rubbing his hamstrings and appearing in obvious distress.

“I was fighting through cramps,’’ Fields told reporters postgame after getting his sore left shoulder X-rayed. “I was hurting, but it was the last drive of the game and wanted to be there for my teammates … to fight through the pain." 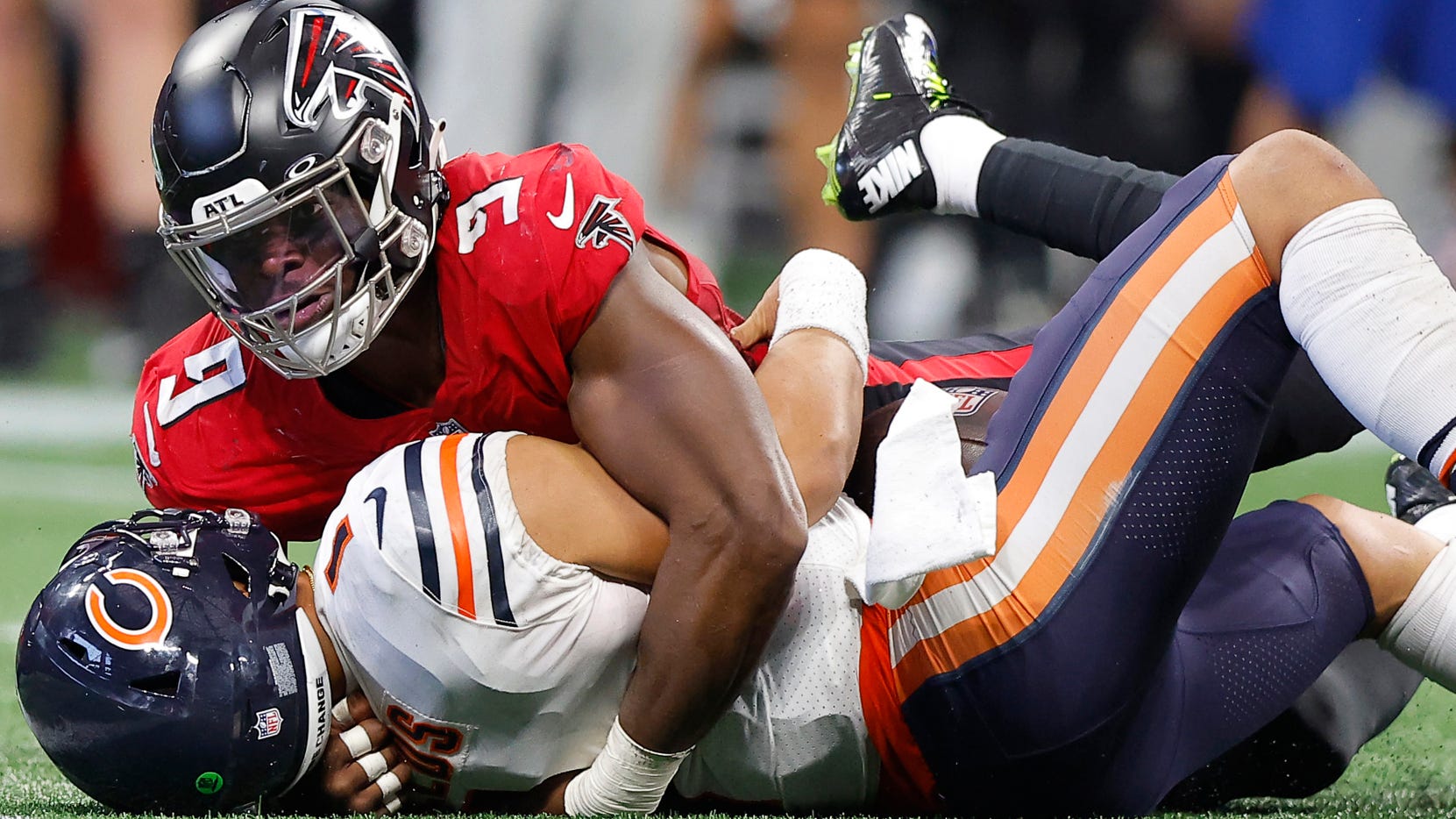 Bernstein: Luke Getsy, what the hell were you thinking?

Everybody from fans in their living rooms to FOX analyst Daryl Johnston in the booth noticed Fields hurting – except apparently Getsy, who called two quarterback runs to start a potential game-winning drive with less than two minutes left. Not even two handoffs to Montgomery – Getsy called two runs by a quarterback who was limping when he walked. Not to mention the Falcons entered Sunday as the second-worst pass defense in the NFL, an invitation to beat them with the passing game.

And for a young, developing quarterback like Fields coming off a loss to the Lions in which he managed a meager 13 passing yards the fourth quarter, here was a shot at redemption for a competitor tired of losing. Falcons kicker Younghoe Koo had just kicked a 53-yard field goal to set the stage for the hometown heroics from a tough quarterback who felt more comfortable throwing than running.

But the Bears calling two quarterback runs and a jump pass to a running back in no way put Fields in the best spot to succeed.

Asked to assess the plays called, coach Matt Eberflus responded postgame, “We’re going to do that on the plane and tomorrow, assess those things."

Flus didn’t sound as frustrated as he must have felt.

So many smarter options existed. Roll Fields out as he looked downfield for receiver Darnell Mooney. Call a safe route for tight end Cole Kmet, who had another impressive day. Do anything but ask an ailing quarterback to make a play with his feet instead of his arm.

In fairness, perhaps Getsy allowed himself to be overly influenced by the previous offensive series when Fields overcame, well, everything.

That game-tying, 13-play, 75-yard touchdown drive displayed all of Fields’ resourcefulness and resolve. Clearly rubbing the back of his legs between plays, Fields felt he had to rely more on throwing than running. So Fields bought himself time, as he did scrambling out of the pocket and pointing Montgomery downfield on a wheel route before delivering a 32-yard dart.

“That was on a dime," Eberflus said.

After that, Fields extended a third-and-12 play and eventually found Equanimeous St. Brown for a 14-yard completion. The play lasted 12 seconds as Fields filibustered long enough to find an open receiver. Those were the type of pass plays that Fields failed to execute in the fourth quarter against the Lions but seemed determine to make against the Falcons, the kind of chances the Bears should've let him take on the final, fateful drive instead of going conservative – even with three timeouts.

Rest assured, Eberflus won’t be answering questions this week about losing Getsy to an NFL head coaching job in the offseason.

It was an unfortunate ending after an encouraging start. Fields carried the ball 14 times in the first half. The Falcons had 12 carries as a team. Getsy continued to call designed runs to establish a tempo, taking advantage of Fields’ rare combination of power and speed. The Bears’ perimeters blockers also contribute to the success of the running game in a way easy to overlook.

On Fields’ touchdown run in the second quarter, St. Brown sealed the edge by blocking down on a Falcons linebacker. On a 19-yard called keeper, Kmet flattened Falcons safety Richie Grant as Fields flew past them. Fields finished with 18 carries for 85 rushing yards, with the Falcons adjusting to the zone read game by crashing their defensive ends to force handoffs. In the passing game, Fields completed 14 of 21 for 153 yards with a touchdown and interception for an 84.0 passer rating as the Falcons safely played quarters coverage to avoid the big play.

Kmet once again helped Fields, doing his best George Kittle imitation with a one-handed circus catch for a 24-yard gain that accentuated his athleticism. It set up a 41-yard field goal by Cairo Santos, who missed a 56-yard attempt near the end of the first half. You wonder if Santos, as consistent as he has become, feels like he’s in a slump after his understandable miss Sunday and an unforgivable shanked extra-point try a week prior. But a kicker’s crisis of confidence ranks very low on any list of Bears’ concerns.

Overall, a passing attack that fell short of 200 yards again included its share of ups and downs. The first positive came on the Bears’ opening drive, when Fields put the ball exactly where it needed to be on a 16-yard touchdown pass to Darnell Mooney. St. Brown’s role on that pass – running his defender into the Falcons cornerback covering Mooney, knocking him off coverage – will be appreciated by coaches during film review. The play Fields will regret most when reviewing the tape occurred when he overthrew an open Mooney on what would've been a 67-yard touchdown pass. (Mooney tried taking blame postgame by saying he was tired and didn’t finish the route.) The one most likely to elicit a chuckle happened when Fields hit right guard Michael Schofield in the back of the helmet with a third-down pass. Doink.

Defensively, the Bears benefited from the Falcons only running 53 plays and avoided giving up explosive gains. Linebacker Jack Sanborn again looked like he belonged with nine tackles – eight solo – and took another step toward establishing himself as a keeper for 2023. Safety Jaquan Brisker led the defense with 11 stops, including a forced fumble. But the Bears failed to sack Falcons quarterback Marcus Mariota, who quietly had a winning day.

The Bears had two takeaways in the first half, with Deandre Houston-Carson forcing a fumble on a punt return and Brisker causing Cordarrelle Patterson to cough it up, which Jaylon Johnson returned 17 yards to the Falcons' 29-yard line. They failed to turn Houston-Carson’s takeaway into points after a self-destructive series starting in Falcons territory that included a botched lateral for a loss of four, a false start and a sack. But seven plays after Patterson’s fumble, the Bears scored a touchdown.

Which only motivated Patterson, it seems. On the ensuring kickoff, he kicked into a gear nobody else found and raced up the middle of the field to a 103-yard touchdown. It marked the third kickoff return for a touchdown the former Bear had scored against the Bears – with three different teams – and established an NFL record with the ninth of his career.

A couple of game-day roster decisions likely to get lost in the knee-jerk postgame analysis warrant a deeper look. Velus Jones Jr. returned kickoffs in Khalil Herbert’s absence and on a 55-yard return flashed the speed the Bears valued in drafting Jones in the third round, a welcome development for a special teams unit that needed a boost. How often will a 55-yard return be the second-longest of a game?

Right guard Teven Jenkins also was active yet remained on the sideline as Schofield started in his spot at right guard. Schofield obviously struggled, getting beaten for an early sack and flagged for a penalty in the second half. It begged the question: If Jenkins was healthy enough to be on the active roster, why wasn’t he healthy enough to reclaim his spot in the lineup, especially with his replacement struggling?

“Teven said I’m still a little hurt but still able to be there as a backup," Eberflus said postgame.

That’s an interesting stance given that Eberflus on Monday refused to lower the expectations for a starter playing at limited strength due to injury – in that case, Johnson – yet accepted Jenkins’ contradictory message of feeling good enough to be a backup but apparently not play. As bad as Schofield played, it’s a fair question to wonder whether Eberflus made the right decision.

Big picture, the Bears lost their fourth straight game and Eberflus hasn’t experienced a victory since Oct. 24. His franchise quarterback left Georgia with a left shoulder injury, his much-ballyhooed offensive coordinator returned home with much less to ballyhoo and his defense remains in shambles.

Try telling Eberflus this was a good day for the Bears’ draft position. He’s only worried about the challenges in front of him and they keep mounting.

“Just rely on the men in the room," Eberflus answered when asked how he’s handling adversity. “I looked at every one of those guy in the eye and just rely on their character."

It is being tested now. The Bears still have six games left, which sounds more like a threat than a promise.