(670 The Score) It says everything about the sorry state of the Bears on the field that the most compelling drama Sunday came off of it.

Not until Justin Fields’ name appeared on the list of inactive players 90 minutes before kickoff did the team officially rule out Fields playing with a separated left shoulder.

Thankfully for the football masses in Chicago, the Bears made the smart, safe call to sit Fields, whose transparency last week in providing details about the severity of his injury made his absence appear inevitable. His team’s odd attempt at gamesmanship included Fields going through pregame running and throwing drills, but the Bears medical staff didn’t dare clear the franchise quarterback. The risk of playing Fields against the Jets seven days after separating his non-throwing shoulder in Atlanta always outweighed any reward.

“We had him warm up a little bit," coach Matt Eberflus told reporters after the Bears' 31-10 loss to the Jets. “It’s about mobility and strength in his left arm.” 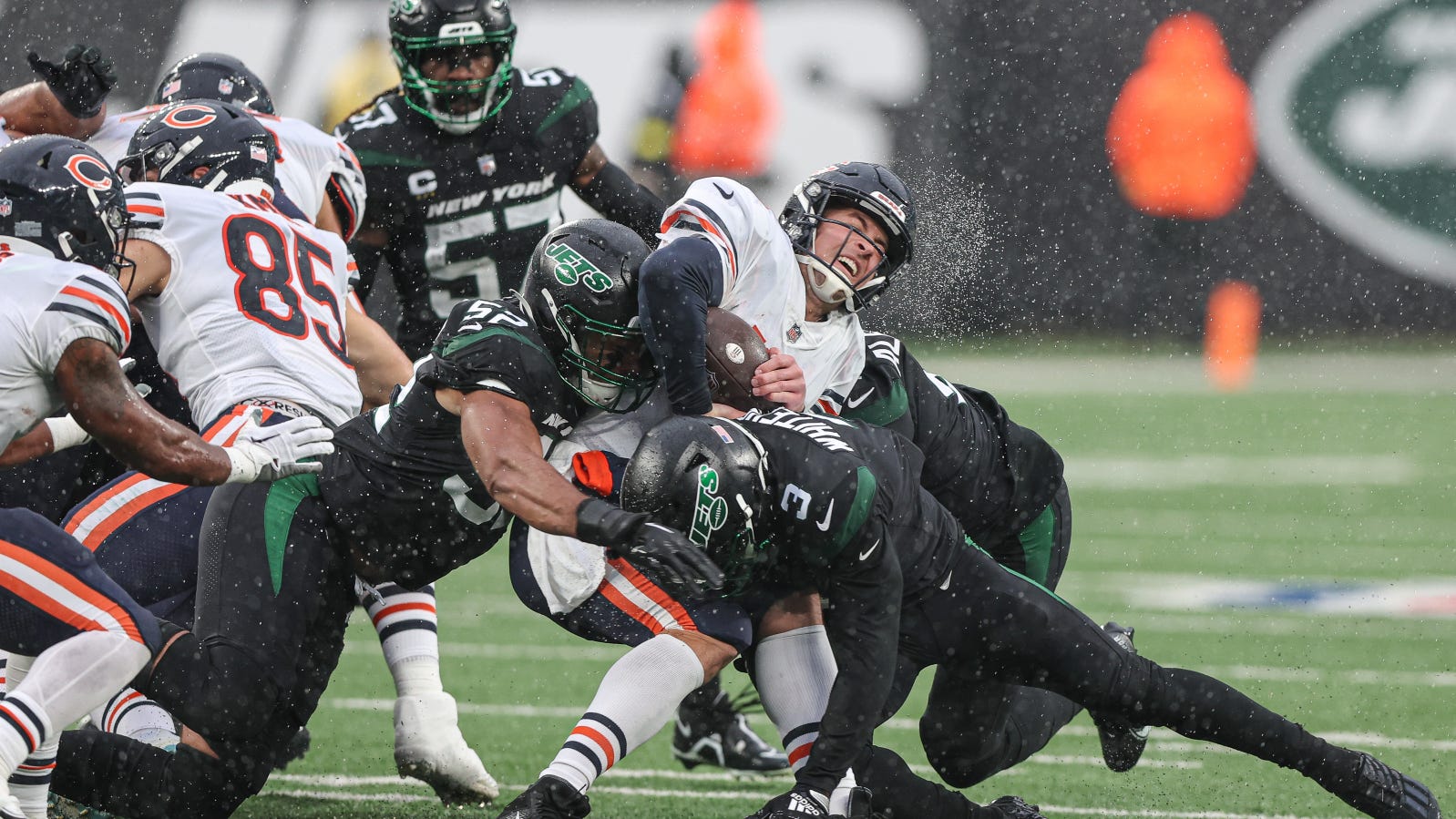 Meanwhile, backup Trevor Siemian prepared all week to start his first game of the season … until, suddenly, Siemian was scratched. Or so it seemed.

Less than an hour before taking his first snap at MetLife Stadium in East Rutherford, N.J., Siemian reportedly suffered an oblique injury during pregame warmups, which thrust No. 3 quarterback Nathan Peterman into the equation. At 11:11 a.m., the Bears PR department tweeted out, “Nathan Peterman will get the start today." Not until the offense took the field already trailing 7-0 to the Jets could anybody be sure who would play quarterback for the Bears.

“It was a little different," Siemian said of the unexpected back-and-forth.

Not that it mattered who started, subbed or mopped up for the Bears in a 21-point loss best described as demoralizing.

The only people celebrating this one were those who have bookmarked tankathon.com on their smart phones.

As for the players, if your name wasn’t Darrynton Evans, the Bears backup running back elevated from the practice squad who had 34 yards rushing and 33 yards receiving, chances are nobody in the visitor’s locker room will have fond memories of a rainy, miserable afternoon in New Jersey. Suffice to say, the effort reminded everyone that the Bears are closer to being the worst team in the league than they are turning the corner. This is when that culture every new regime vows to change needs to foster an environment that maximizes production despite the potential. Hello, HITS principle.

“The first half was competitive, we were in it … the second half wasn’t good enough," Eberflus said. “We have a ton of character in the locker room. We’re going to continue to rely on that."

There really is no other choice.

It seems as if it was last season when the Bears beat the Patriots in Foxborough, Mass. It actually seems even longer ago, like during the Tom Brady era in New England, but the calendar says it was Oct. 24. The Bears haven’t won a game since, winless for five dreadfully long weeks and counting, and in every regrettable loss since have made a couple mistakes that flummox a frustrated fan base.

This loss was no different. Take right tackle Larry Borom giving up a sack on third down in the third quarter, for just one example. You don’t have to be an offensive line expert to wonder why Borom, with Jets defensive end Bryce Huff the only player lined up on his outside shoulder, took a step and glanced inside at the snap of the ball. Huff probably stopped laughing long enough to rush into the backfield, untouched, where he sacked Siemian. Later, Siemian accepted responsibility for a “protection mixup." Regardless, the Bears punted.

Earlier, the offense provided another slap-the-couch moment. On third-and-short, the Bears called on Siemian to run a quarterback sneak. Here was a quarterback, whose status was in doubt until minutes before kickoff due to an oblique injury, running the ball into the thick of a pile formed by 300-pound behemoths that is the GPS location of harm’s way. For the second straight week, Bears offensive coordinator Luke Getsy called a play that exposed an ailing quarterback to an aggressive defense. And if that was an audible by Siemian, he never should've had that autonomy under the circumstances. Could somebody please introduce Getsy to the Bears team physician?

Diverting from the small details to the big picture can make you want to look away too – especially considering the injuries that compounded Sunday’s catastrophe.

Borom had replaced veteran starter Riley Reiff in the first quarter. Worse, safety Eddie Jackson left the game near the end of the second quarter with what appears to be a serious foot injury. Receiver Darnell Mooney departed in the third quarter after his ankle got rolled up from behind while blocking on a running play. Eberflus stayed away from specifics, but Jackson and Mooney represent core players to whatever the Bears are building. Losing them sucked the life out of both sides of the ball.

“It stinks," Siemian answered when asked about Mooney’s injury.

On defense, it only increased the degree of difficulty on a day that already had its share of challenges without rookie starters in safety Jaquan Brisker and cornerback Kyler Gordon, who both were sidelined by concussions. Linebacker Jack Sanborn can’t make every tackle (it only seems like he does). Given the dropoff in production, you could argue that the defense losing Brisker and Gordon hurt more than the offense playing without Fields. Jets rookie receiver Garrett Wilson made that a persuasive argument with five catches for 95 yards, getting loose early and often.

Wilson’s second touchdown reception came on a 54-yard crossing pattern made possible when Jackson went down immediately after trying to plant and drive off his left foot. Jackson lay helpless in pain on the ground as Wilson ran past him and into the clear, giving the Jets a 14-10 lead but, more significantly, punctuating the play that likely ended Jackson’s season. Trainers helped Jackson off the field and a cart took him into the locker room, making way for rookie Elijah Hicks to get his first NFL snaps at free safety. As for Jackson, he was in the midst of a resurgent season while playing at a Pro Bowl level again but now faces another long rehabilitation – and a decimated Bears defense lost another veteran leader.

Injuries and attrition now make the final five-game stretch an audition phase for the Bears defense. The front seven already looked like it was under construction after Chicago traded Roquan Smith and Robert Quinn, and now the back four appears in a state of flux. Hicks will get a look in Jackson’s place, and DeAndre Houston-Carson always gives the Bears a professional effort when necessary. But the Bears have replaced too many good players with replacement-level subs to expect much moving forward, regardless of the schedule.

The playoff-ready Jets took advantage, rolling up 466 total yards in a huge game to their season. Coach Robert Saleh replaced quarterback Zach Wilson – the No. 2 pick in the 2021 NFL Draft, New York’s version of Mitch Trubisky – and second-teamer Mike White got the start. But to the surprise of many, White played the role of gate attraction rather than gatekeeper in completing 22 of 28 passes for 315 yards and three touchdowns for a 149.3 passer rating. In the tabloid world of New York City, the Jets’ move was backpage-worthy: “WHITE XMAS! Jets’ backup-QB-turned starter Saleh’s gift to fans in rout of Bears.” White exploited the wide-open holes in the Bears' secondary and seldom felt pressure in the pocket.

Though for the first half, the quarterback battle was as even as the game.

In an off-, off-, off-Broadway matchup of understudy game managers, Siemian earned mixed reviews, but his supporting cast needs work. He completed 14 of 25 passes for 179 yards with a touchdown and interception with a 75.3 passer rating. It’s harder to measure the respect Siemian gained by playing hurt and diving for a first down in the second half with a sore oblique even with the game out of hand.

Siemian ran the offense with efficiency early on, relying on his veteran savvy and inherent confidence, on display as he made throws that gave his receivers chances to make plays. The best example of that came on a 21-yard completion that Siemian threw to Chase Claypool with Pro Bowl-caliber cornerback Sauce Gardner draped all over Claypool. Officials called pass interference (a nice surprise for Bears fans) as Claypool caught the ball at its highest point anyway. Bears receiver Byron Pringle also benefited from Siemian’s mentality on a four-yard touchdown reception over Jets cornerback D.J. Reed that simply was a good catch of a bad throw. The Pringle catch even caught the Bears social media team off-guard. The tweet that followed the touchdown referred to Pringle as “BRYON.’’

A potential positive for Fields was easier to read. From a passing standpoint, Fields could've benefited by watching Siemian have success when he committed to “throwing receivers open," which in the NFL really just means trusting wide receivers to come down with contested throws.

“I just told them I don’t care who’s over there, I’m going to throw it to you," Siemian said.

Now attention shifts to who will be throwing to those receivers against the Packers, this year’s Super Bowl for the Bears. Will Fields go or rest another Sunday with an off week after it offering more healing time?

“We think that he’s getting better," Eberflus said of Fields. “We’ll see where it goes and leave it day to day."