Godwin entered last offseason as a free agent before signing a one-year deal to return to the Tampa Bay Buccaneers on the franchise tag.

His 2021 season ended when he tore his ACL in Week 15 — which will surely be something to take into consideration for any team looking to sign him. However, Godwin has emerged as one of the best receivers in the NFL over the last three seasons and would be an asset to any offense once he's fully healthy.

Here’s a look at the teams that would make sense for Godwin.

The Odell Beckham Jr. experiment didn't quite work out, and the Browns could still use some help in their receiving corps. They're also expected to have money to spend in free agency, with a projected $37 million in cap space, per Over the Cap.

Godwin could be everything Beckham wasn't in Cleveland. He has the versatility to play the slot or the outside and would easily be the No. 1 option ahead of Jarvis Landry and Donovan Peoples-Jones. If the Browns are sticking with quarterback Baker Mayfield, surrounding him with weapons will be vital, and Godwin has a proven track record to fit that bill. 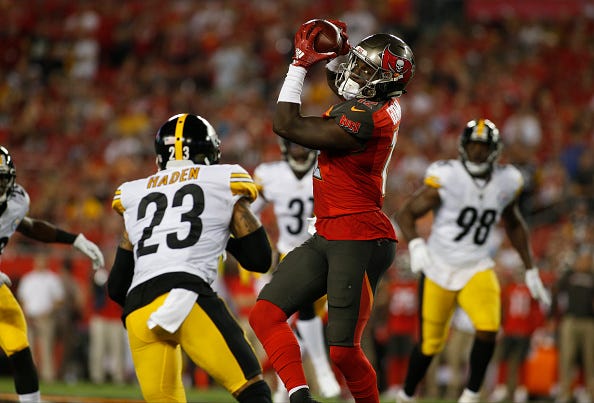 The Steelers may be looking at a total overhaul of their offense this offseason. Ben Roethlisberger is likely retiring, and JuJu Smith-Schuster is also a free agent, so Pittsburgh could choose to move on.

With Diontae Johnson is coming off his first 1,000-yard receiving season, the addition of Godwin would give them a dynamic duo similar to that of what Godwin had with Mike Evans in Tampa. The Steelers have arguably lacked a true No. 1 receiving threat since Antonio Brown left, and Godwin could certainly fill those shoes. Pairing him and Johnson in the same offense should also be a boost to whoever is quarterback for the Steelers next season.

There's a lot on the Bears' to-do list this offseason, starting with finding a new general manager and head coach. A top priority in free agency and the draft will likely be to find protection for quarterback Justin Fields, who was sacked 36 times in 12 games in his rookie season.

But finding Fields more weapons will also be a priority. Allen Robinson is coming off a disappointing season and is expected to leave in free agency, and Godwin could be the better investment. Despite the ACL injury, Godwin is three years younger than Robinson and had a successful 2021 campaign. Pairing Godwin with Darnell Mooney in the receiving corps, along with tight end Cole Kmet, could give Fields the weapons he needs — so long as he has the protection.

The Jaguars are projected to have $60 million in cap space this offseason, and the team should utilize its resources as much as possible in an effort to surround Trevor Lawrence with weapons and build a strong offense.

Sure, Jacksonville has plenty of young receivers with high upside such as Laviska Shenault and DJ Chark (who's a pending free agent), but Godwin would be a significant upgrade over both of them and would represent a step in the right direction for a Jaguars team that desperately needs to turn it around. 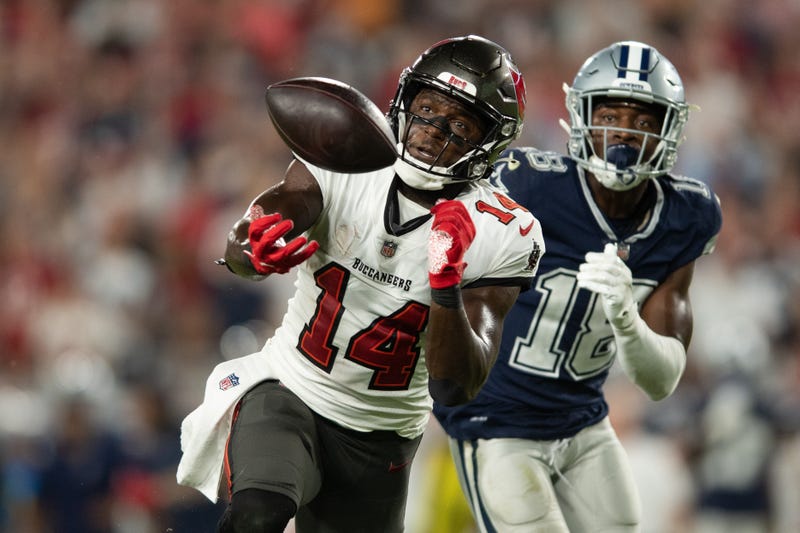 After a spending spree last offseason, the Patriots won't have as much cap space to go crazy in free agency this year, but don't count them out on a player like Godwin just yet.

The Patriots are in clear need of upgrading their pass-catching options for Mac Jones, with not a single receiver on the roster accumulating 1,000 yards. ESPN reporter Jeremy Fowler recently floated that New England could potentially eye Godwin to bolster its offense and suggested making room for him by cutting someone, such as Nelson Agholor (who had just 473 receiving yards in 2021). He'd cost $10 million in dead money but save $5 million in cap room.

Of course, when it is all said and done, the Buccaneers could choose to sign Godwin to a long-term deal and keep him in Tampa. They could also use the franchise tag again on Godwin, but the team is going to have 27 pending free agents.

Re-signing Godwin won't be easy, however. He'll want to get paid like a No. 1 receiver, and Evans is still on his $55-million contract through 2023. There are plenty of ways to structure Godwin's contract to make it work with the cap space, but it also may entail the Bucs losing another key piece, someone like a Jason Pierre-Paul, who's also a free agent. It remains to be seen if that's what the Bucs are willing to do, but there's no question the team is better with Godwin than without him.