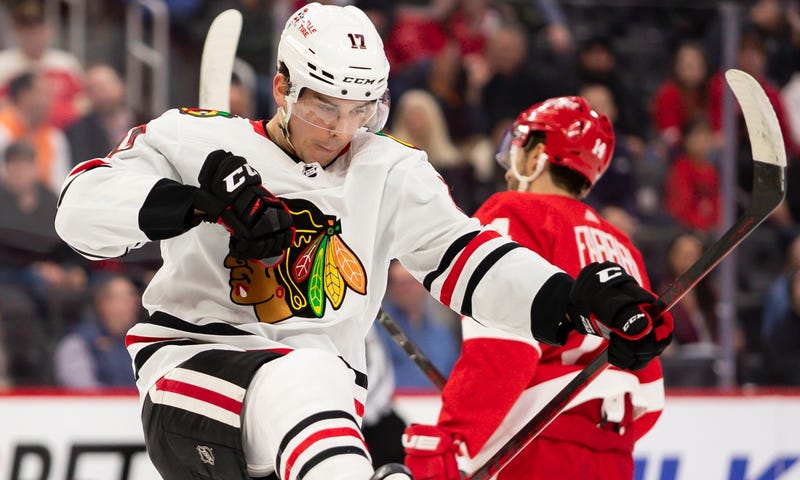 DETROIT (AP) — Dylan Strome scored three goals and the Chicago Blackhawks had their highest-scoring game of the season in an 8-5 win over the Detroit Red Wings on Wednesday night.

Alex DeBrincat added two third-period goals for the Blackhawks, who led 4-0 in the first period but twice allowed Detroit to get within one goal. DeBrincat's empty-netter with 1:43 remaining finally put the game away as Chicago ended a four-game winless drought.

Robby Fabbri, Tyler Bertuzzi, Pius Suter, Moritz Seiter and Dylan Larkin scored for Detroit. Larkin banked in a shot off a goalpost to cut Chicago's lead to 6-5 with 4:35 left in the game.

Strome scored twice in the first period and completed the hat trick in the third with his second power-play goal of the game, putting the Blackhawks ahead 5-3. He had four goals this season coming into the game.

Fabbri, Bertuzzi and Suter scored in the second period to get the Red Wings within one. DeBrincat's first goal put Chicago ahead 6-3 in the third, but Seider scored on the power play before Larkin added his 20th of the season. Hagel restored the Blackhawks' two-goal advantage with his 11th.

NOTES: Lafferty's goal was his first of the season ... Detroit goalie Alex Nedeljkovic allowed four goals in the first period. He was replaced by Calvin Pickard to start the second.

UP NEXT
Chicago: hosts Colorado Avalanche on Friday.
Detroit: at Pittsburgh Penguins on Friday.