(RADIO.COM Sports) The leaked jerseys for the the NBA All-Star Game this season were met with some mixed reviews from the basketball community, as is expected to be the case with most jersey reveals.

REPORT: These are reportedly the 2021 NBA All-Star Jerseys, via @camisasdanba. pic.twitter.com/534ffLnuej

After all, not everyone can be a fan of the same jersey. That is, of course, unless they're the old green Vancouver Grizzlies jerseys or the purple Toronto Raptors uniforms with the big red dinosaur on the front or the "Miami Vice" Heat alternates. OK, maybe there are more than a few universally likable NBA jerseys. 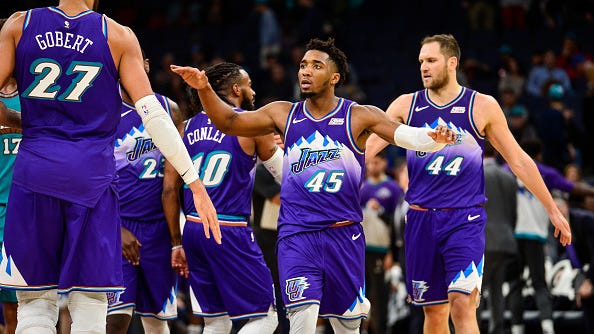 Ranking the NBA's 15 Greatest Jerseys Ever

But the same can't be said for every All-Star Game jersey that the NBA's best have worn over the past quarter century. In fact, while some were loved by players and fans alike, there were several that were almost unanimously panned and, predictably, dropped for a completely new design in future years.

Let's take a look at some of the best and worst designs from recent years, starting with the ones that made the event a little bit harder to enjoy. 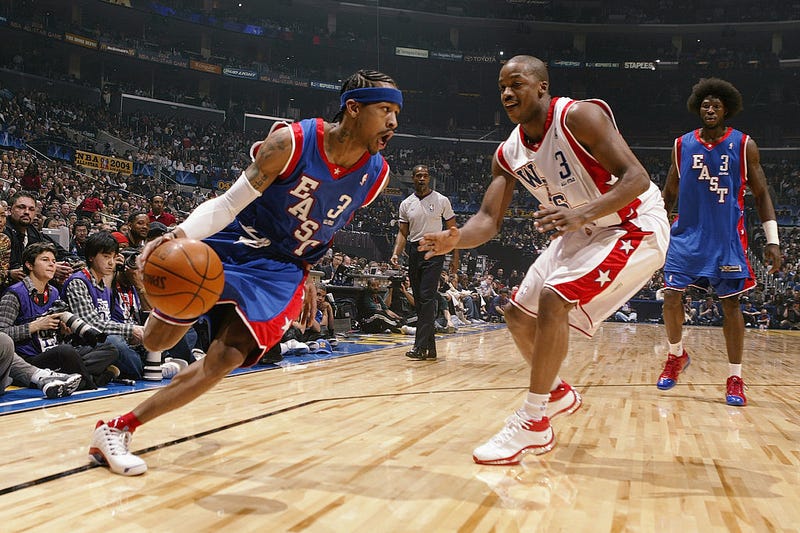 I'm sorry, but text that slopes downward and diagonally just doesn't feel appropriate anywhere outside the world of hockey. The color scheme isn't anything egregious — red, white and blue is quite typical — but I don't really understand why we felt the need to merge basketball and hockey. The NBA must have seen the flaw and never went for diagonal lettering in another contest.

Thankfully, these uniforms weren't used during perhaps the coolest part of the weekend, as LeBron James, Carmelo Anthony, Chris Bosh, Dwyane Wade and the rest of the star-studded 2004 draft class — Darko Milicic, unsurprisingly, didn't make the cut — teamed up for the Rookie Challenge game. 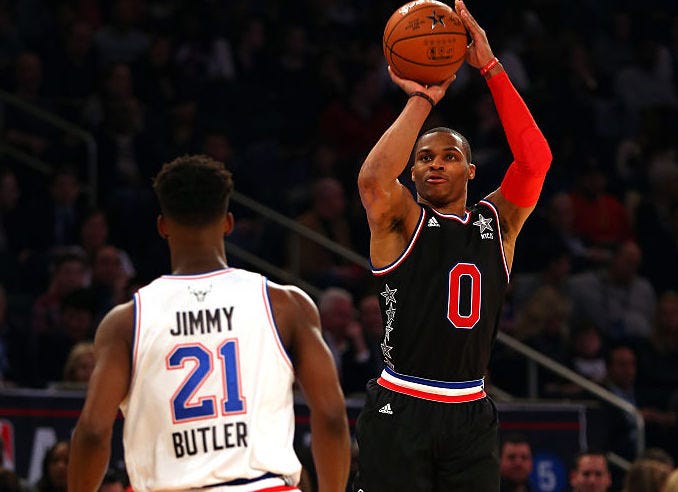 Worst — 2015: There's a reason we don't have first names on jerseys

In an effort to put players' first and last names on the backs of the All-Star jerseys — for some reason — these designs also happened to incorporate an incredibly boring color scheme. It was a tandem of bad ideas that didn't work and, to be honest, didn't make sense.

I can understand using nicknames on the backs of jerseys for a fun event, but what do first names add to the picture? These are the biggest names in the league, so you're more than likely to know that the "James" who's throwing down a ferocious dunk is LeBron and isn't former NFL running back Edgerrin James or "Paul Blart" portrayer Kevin James.

It's a no from me, but at least they weren't as bad as the concept for Christmas Day action that year. 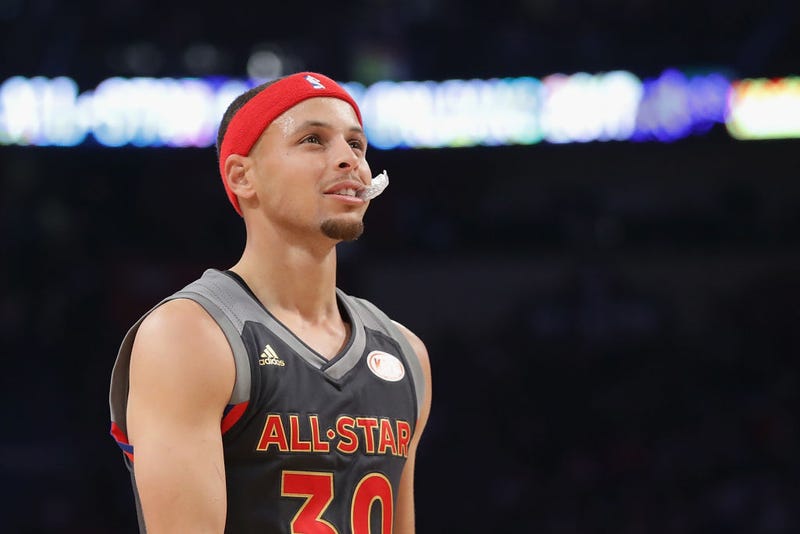 Steph Curry may have been wondering why his uniform looked the way it did at the 2017 All-Star Game. Photo credit (Ronald Martinez/Getty Images)

Worst — 2017: Late switch to New Orleans may have led to jersey disaster

The 2017 All-Star Game was supposed to be held in Charlotte, but a late change centered around North Carolina's controversial "House Bill 2" moved the event to New Orleans.

The fact that the designs may have needed to change drastically is understandable. The results of that design process, however, weren't. I don't get the color scheme at all. It's all over the place, more so with the darker uniform than the lighter one.

The other aspect of this All-Star weekend to disappoint was the Slam Dunk Contest, in which Glenn Robinson III — bet you didn't remember that one, did you? — took home the win in a contest that completely paled in comparison to Aaron Gordon and Zach LaVine's dunk-off from the year prior.

On this night in 1996, Michael Jordan took home the All-Star Game MVP by scoring 20 points in an East victory. pic.twitter.com/RuEOXdNzVm

Is anything more '90s NBA than these jerseys, aside from maybe the "Space Jam" jerseys from the same year?

Both are examples of a cartoon-ish fusion into pro hoops, and Michael Jordan rocked both extremely well. The fact that these mid-'90s gems are often seen at "darties" — for you old folk, those are parties held during the daytime where you'll probably end up seeing more than a few fraternity brothers attempting to show off their jersey collections — should tell you that it's one of the most memorable and beloved designs.

However, it also marked the end of city-specific jersey designs, so perhaps they weren't as universally beloved as I'd have thought. It would be wrong of me not to acknowledge another awesome set of threads from that era, though it missed our 25-year cutoff.

This Day In 1995: The most insane NBA All-Star Game jerseys for the game in Phoenix pic.twitter.com/wP9nqli5mH 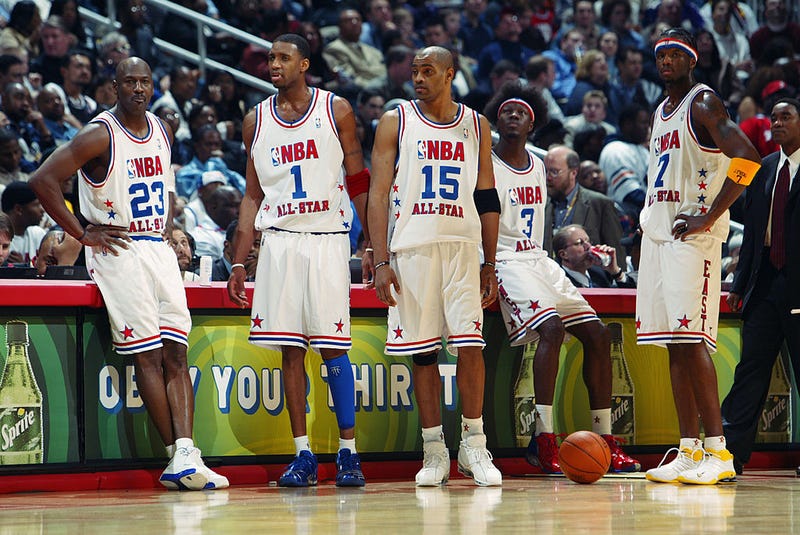 Michael Jordan teamed up with a bunch of younger players for his final All-Star Game in 2003. Photo credit (Jamie Squire/Getty Images)

Best — 2003: A simple yet effective blast from the past

Jordan, at around 40 years old, took part in an All-Star Game for the 14th and final time of his career, so it was only right that the jerseys served as a nice tribute to the era he helped to define. These are so simple that it's hard to pick out the exact reason why they work so well. Looking at them makes me feel as though I just dug through some old boxes in my basement and dusted off a piece of special NBA nostalgia that just has some sort of mystical quality to it.

The presence of multiple stars throughout the design, the classic block font, the NBA logo sitting proudly on the front ... it all just works. 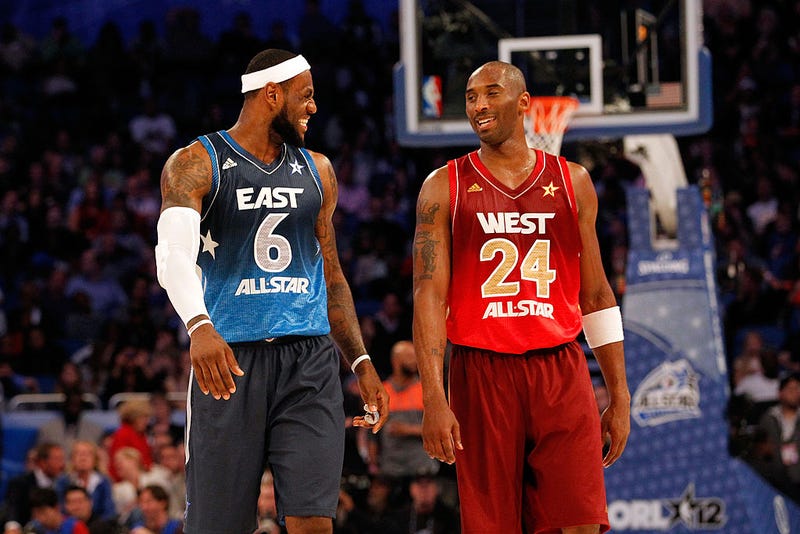 While the first name jerseys were a small tweak, it was a fix that seemed unnecessary and didn't really add much to the jerseys. These 2015 uniforms, on the other hand, made a small tweak from other red/blue designs in years past and simply made them gradient. The red, gold and whites sit well against each other, as does the blue, silver and white on the other team.

It's nothing too fancy. But it's enough to separate them from other jerseys that elevate them from "just fine" to "interesting" with only a little bit of innovation.