All Star Game MVP is a historical award. Many players dream of taking home the honors for the annual event, even if the effort isn’t 100% throughout the game.

There is some randomness to the award, but it’s smart to stick to the starters who are sure to get playing time and plenty of touches to put up the necessary counting stats.

Here are some valuable wagers to make on who will take home All Star MVP honors, courtesy of DraftKings Sportsbook. 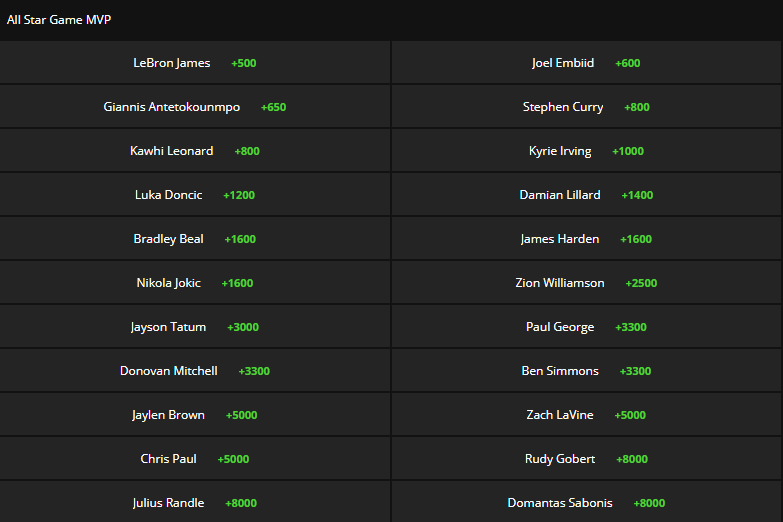 A few reasons brought me to Embiid.

First, he is the front runner for regular season MVP, and taking home the honors for the All Star Game would only help strengthen his narrative.

Also, he is the only true big man starting on Team Durant,

The All Star game is built for big men. They are going to get a ton of alley oops and easy dump offs during the exhibition part of the game.

With so much momentum behind Embiid for MVP, I expect him to bring maximal effort on Sunday.

Lastly, and most importantly, It helps that Embiid’s coach is going to be his real coach, Doc Rivers. Rivers is going to manage his star players minutes, but also makes sure he gets a ton of playing time.

The narrative will be that if LeBron’s team wins he will be the MVP, which is why LBJ stands as the favorite at +500.

The counter to that is if Curry gets hot from three-point land, his teammates will feed into that and let him keep firing away. This is a bet on Curry dominating the exhibition style of the game with a barrage of three-point shots.

He’s starting, so he’s sure to get a lion’s share of minutes, and worth a bet to dethrone his captain, James, for his first ever All Star Game MVP.

Reed is a native of New Jersey and graduate of the University of Wisconsin-Madison. He is a die-hard Brooklyn Nets fan and always believes the spread has a chance of covering. You can follow Reed on Twitter @ReedWallach for more commentary.